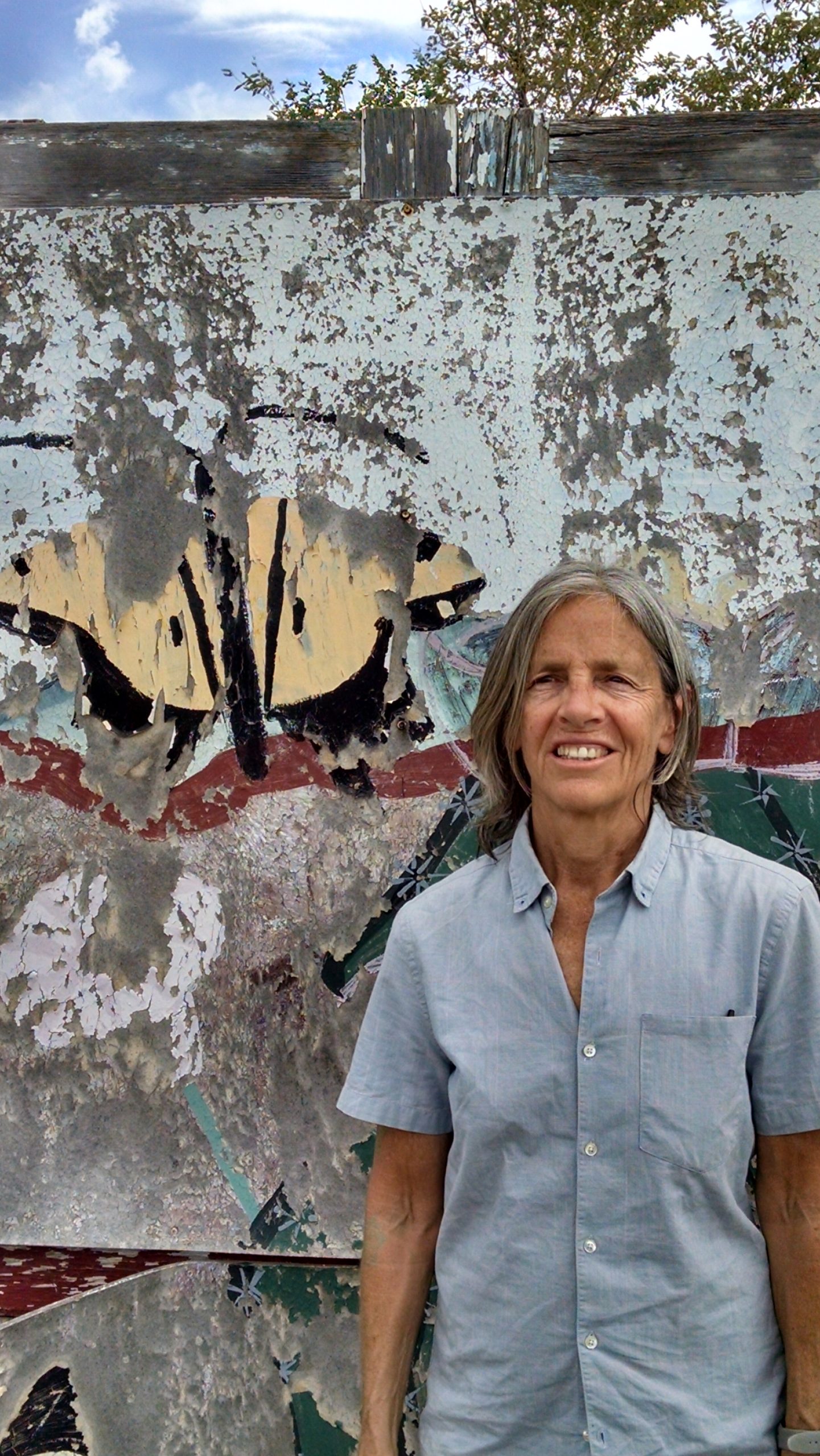 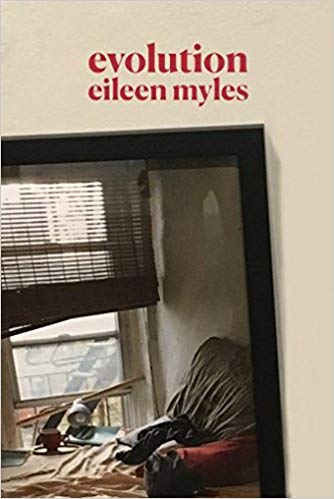 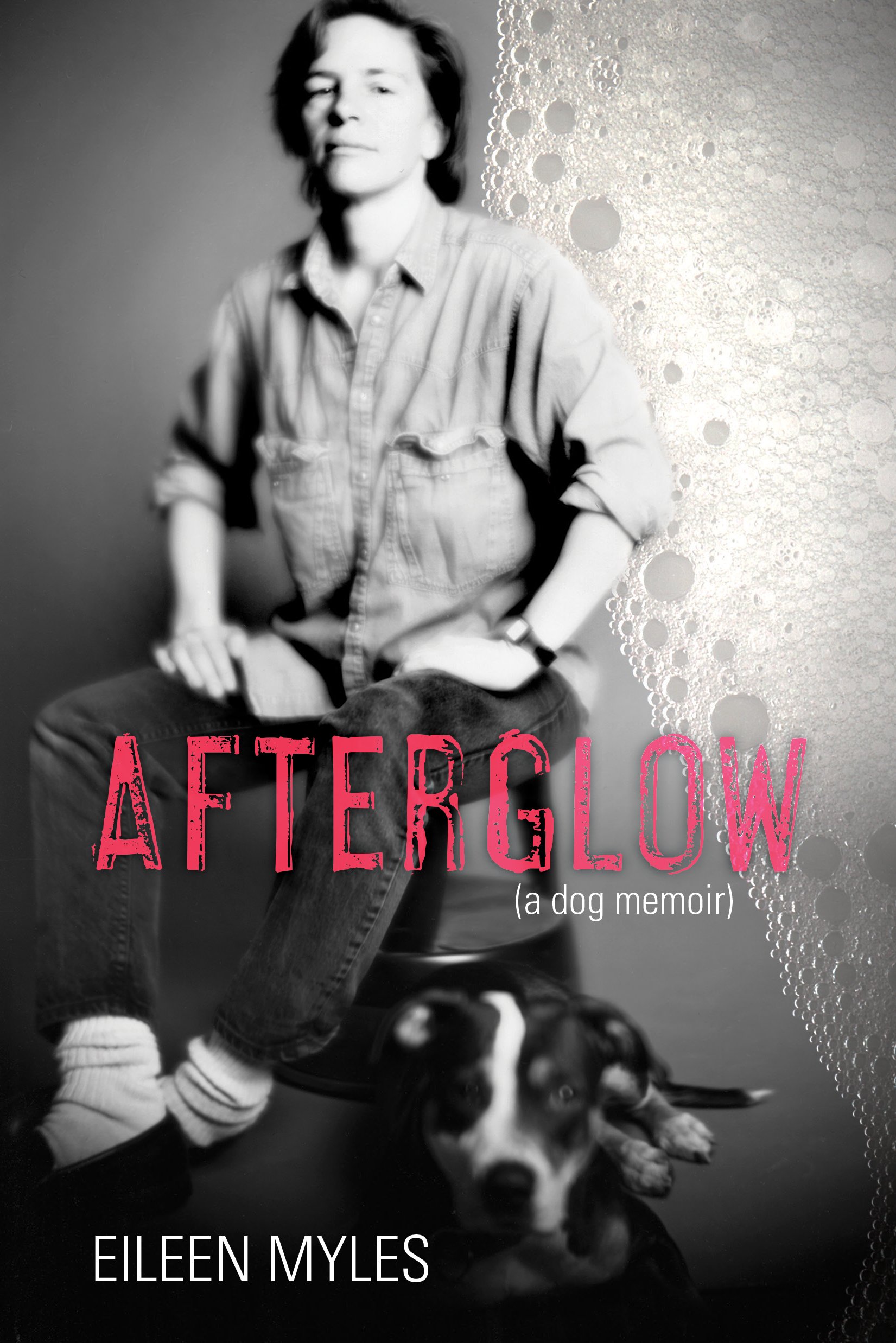 • An Evening with Eileen Myles

“Myles is that rare creature, a rock star of poetry.” —Boston Globe


Widely renowned, poet, novelist, performer, and art journalist, Eileen Myles is a trailblazer whose decades of literary and artistic work, in the words of the New York Review of Books, “set a bar for openness, frankness, and variability few lives could ever match.” Myles is the author of more than twenty books including I Must Be Living Twice: New & Selected Poems and a re-issue of Chelsea Girls. Poems written by—and a character based on—Myles appeared in seasons 2 and 3 of the Emmy-winning Amazon show Transparent. Their memoir, Afterglow (a dog memoir), (Grove, 2017) paints a kaleidoscopic portrait of a beloved confidant: the pit bull called Rosie. Jennifer Krasinski writing for The Village Voice said: “Their exquisite slapstick tragedy Afterglow is a radical memoir about and for and by their now-deceased but forever-beloved pitbull Rosie, who the poet believes is a dead ringer for their dead father.”

As a poet and art journalist, they have contributed to a wide number of publications including Art Forum, The New Yorker, Harpers, Parkett, The Believer, Vice, Cabinet, The Nation, TimeOut, Paris Review, and AnOther Magazine. They often contribute essays to catalogs for major exhibitions such as the Whitney and Liverpool Biennials.

Eileen Myles was born in Cambridge, Massachusetts in 1949, attended Catholic schools in Arlington, and graduated from the University of Massachusetts (Boston) in 1971. They came to New York in 1974 to be a poet. Their poetic education primarily took place at St. Mark’s Poetry Project from 1975 to 1977, through attending readings and participating in workshops led by Alice Notley, Ted Berrigan, and Paul Violi. From 1984 to 1986 Eileen was the artistic director of St. Mark’s Poetry Project.

From 1977 to 1979 they published dodgems, a poetry magazine that represented a collision of New York School, Language Poetry, performance texts, unconventional prose, as well as tossed-off notes from neighbors and celebrities. In 1977, they co-edited the feminist anthology Ladies Museum, and in 1979 they worked as an assistant to poet James Schuyler. That same year, Myles was a founding member of the Los Texans Collective (with Elinor Nauen and Barbara McKay), which went on to produce the play Patriarchy and the spiritual entertainment Joan of Arc.

Eileen Myles has toured and read all over North America and Europe on and off since the early 1980s. Their solo performances include Leaving New York (1989), Life (1991), and Summer in Russia (1996) at PS 122 in New York. Their plays include Feeling Blue (Parts 1, 2, and 3) at Modern Art, and Our Sor Juana Ines de la Cruz, written for Alina Troyano and produced at PS 122. In 2004, they wrote the libretto for the opera Hell, composed by Michael Webster. In 2010, they created and directed their Dia Center for the Arts performance piece, The Collection of Silence, which involved dancers, poets, children, visual artists, and Buddhists in a collective public act of silence at the Hispanic Society in New York.

Eileen Myles is the recipient of a Guggenheim Fellowship in non-fiction, an Andy Warhol/Creative Capital art writers’ grant, four Lambda Book Awards, the Shelley Prize from the PSA, was named to the Slate/Whiting Second Novel List in 2015, and received a poetry award from the Foundation for Contemporary Arts. In 2016 they received a Creative Capital grant and the Clark Prize for excellence in art writing as well as the Lambda Pioneer Award for contributions to the LGBT literary community. They live in Marfa,TX and New York City.

Eileen Myles the author of more than twenty books, including For Now, Evolution, Afterglow (a dog memoir), Chelsea Girls, and I Must Be Living Twice: New & Selected Poems 1974-2014. Myles’s many honors include four Lambda Literary Awards, the Clark Prize for Excellence in Arts Writing, the Shelley Memorial Award from the Poetry Society of America, Creative Capital’s Literature Award as well as their Andy Warhol Foundation Arts Writers Grant, and a Foundation for Contemporary Arts grant. Myles lives in Marfa, Texas, and New York City. 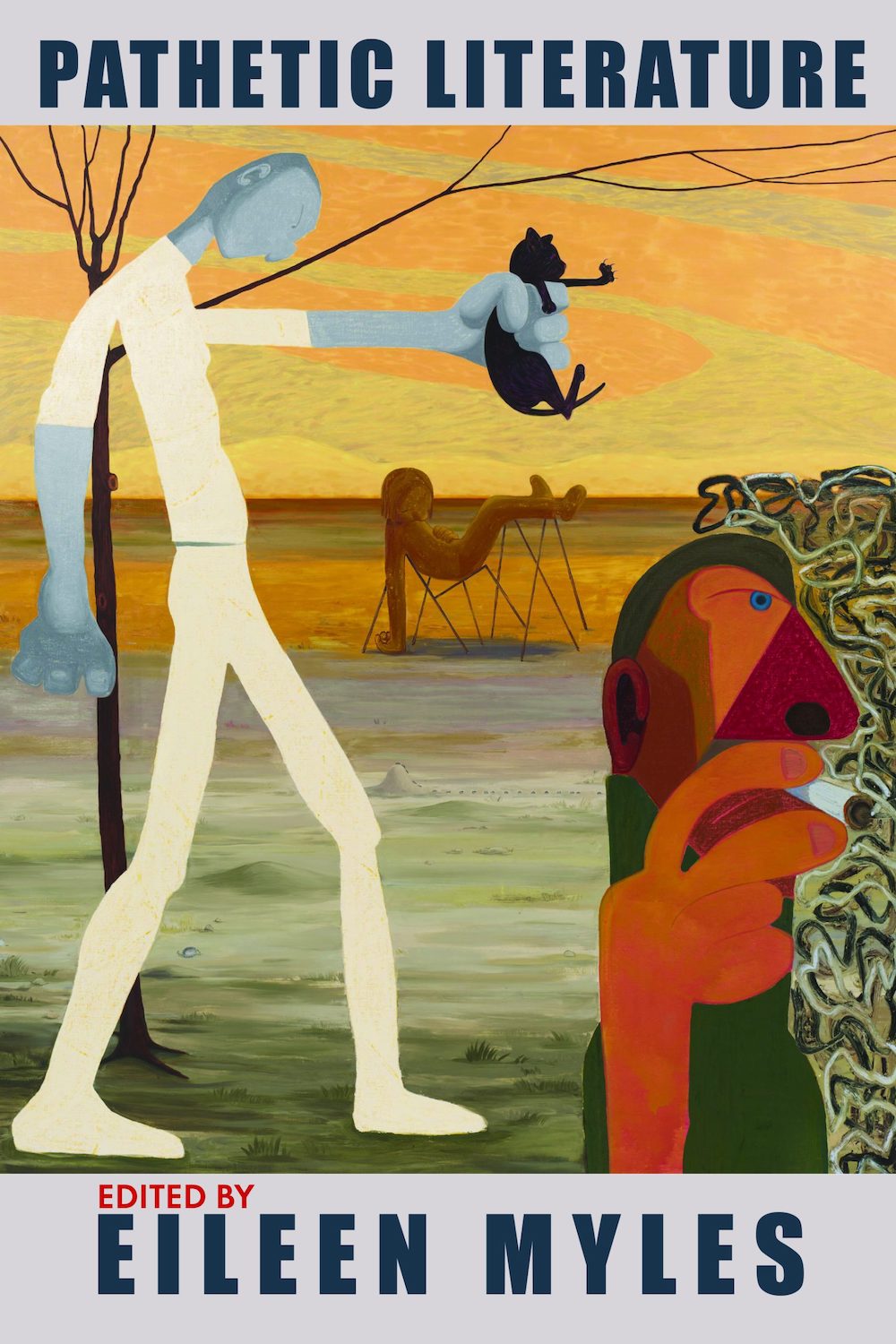 An utterly unique collection composed by the award-winning poet, a global anthology of pieces from lesser-known classics by luminaries like Franz Kafka, Samuel Delany, and Gwendolyn Brooks to up-and-coming unpublished writers that examine pathos and feeling, giving a well-timed rehab to the word “pathetic.” 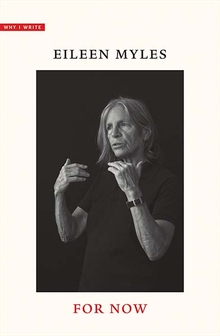 In this raucous meditation, Eileen Myles offers an intimate glimpse into creativity’s immediacy. With erudition and wit, Myles recounts their early years as an awakening writer; existential struggles with landlords; storied moments with neighbors, friends, and lovers; and the textures and identities of cities and the country that reveal the nature of writing as presence in time. For Myles, time’s “optic quality” is what enables writing in the first place—as attention, as devotion, as excess. It is this chronologized vision that enables the writer to love the world as it presently is, lending love a linguistic permanence amid social and political systems that threaten to eradicate it. Irreverent, generous, and always insightful, For Now is a candid record of the creative process from one of our most beloved artists.

The first all-new collection of poems since 2011’s Snowflake/different streets―and following the critically acclaimed Afterglow (a dog memoir), as well as the volume of selected poems, I Must Be Living Twice―here, in Evolution, we find the eminent, exuberant writer at the forefront of American literature, upending genre in a new vernacular that enacts―like nobody else―the way we speak (inside and out) today. Evolution, with its channeling of Quakers, Fresca, and cell phones, radiates vital insight, purpose, and risk, like in these opening lines of the title poem:

Something
unearthly
about
today
so I buy
a Diet Coke &
a newspaper
a version of “me”
something
about me on the
earth & its sneakers
& feeling like
the earth’s furniture
but that can’t be
true or like
the coke & the Times
it’s true for a little
while.

This newest book paints a kaleidoscopic portrait of a beloved confidant: the pit bull called Rosie. In 1990, Myles chose Rosie from a litter on the street, and their connection instantly began to make an indelible impact on the writer’s sense of self and work. Over the course of sixteen years together, Myles was devoted to the dog’s wellbeing. Starting from the emptiness following Rosie’s death, Afterglow (a dog memoir) launches a probing investigation into the dynamics between pet and pet-owner. Through this lens, we examine Myles’s experiences with intimacy and spirituality, celebrity and politics, alcoholism and recovery, fathers and family history, as well as the fantastical myths we invent to get to the heart of grief. Moving from an imaginary talk show where Rosie is interviewed by Myles’s childhood puppet, to a critical reenactment of the night Rosie mated with another pit bull; from lyrical transcriptions of their walks, to Rosie’s enlightened narration from the afterlife, Afterglow (a dog memoir) illuminates all that it can mean when we dedicate our existence to a dog. 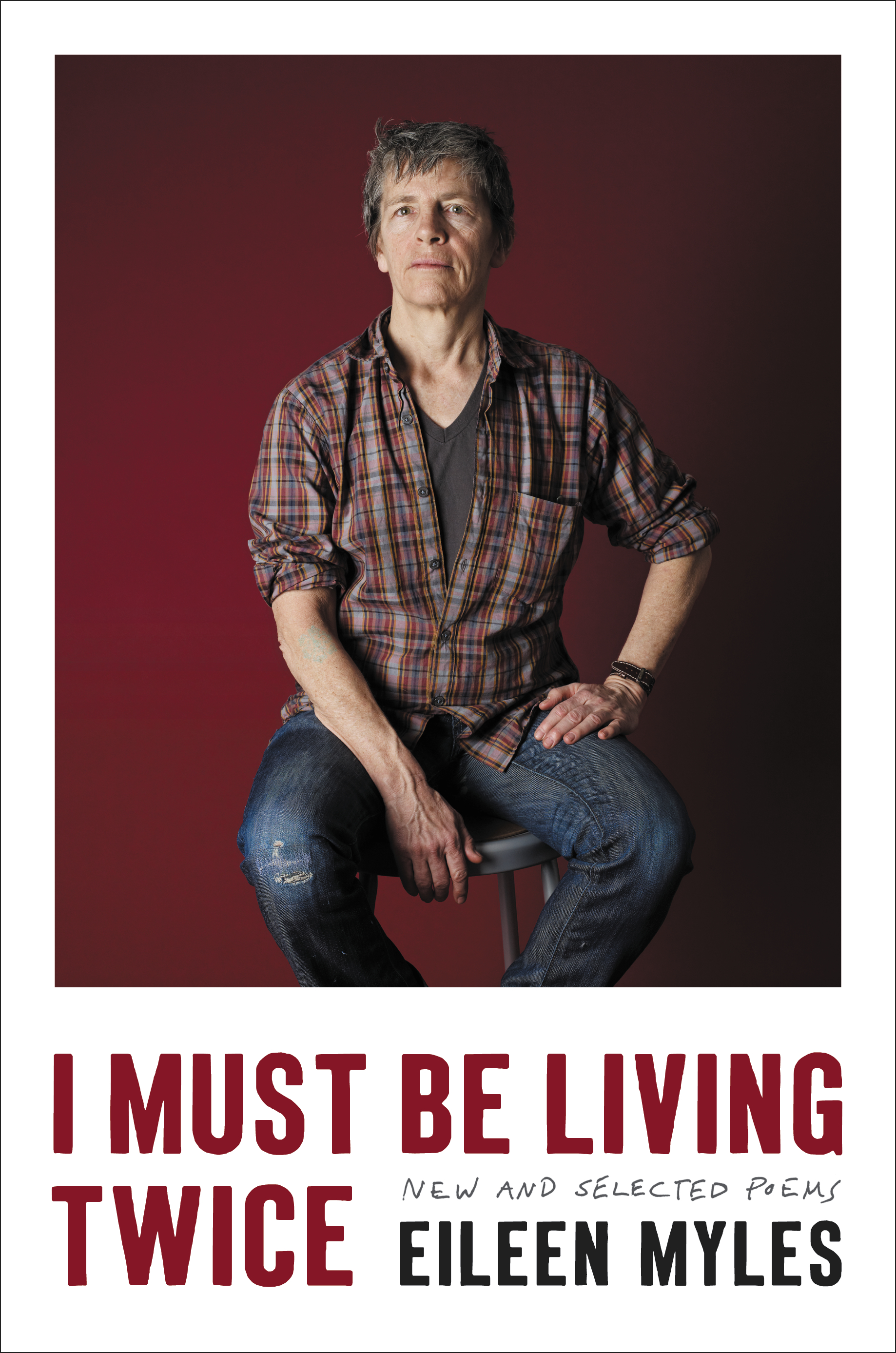 I Must Be Living Twice: New & Selected Poems

A collection of thrilling verse, including both new poems and beloved favorites, from the celebrated poet, modern cult icon, and author of Chelsea Girls. Eileen Myles’ work is known for its blend of reality and fiction, the sublime and the ephemeral. Her work opens readers to astonishing new considerations of familiar places, like the East Village in her iconic Chelsea Girls, and invites them into lush—and sometimes horrid—dream worlds, imbuing the landscapes of her writing with the vividness and energy of fantasy. I Must Be Living Twice brings together selections from the poet’s previous work with a set of bold new poems that reflect her sardonic, unapologetic, and fiercely intellectual literary voice. Steeped in the culture of New York City, Myles’ milieu, I Must Be Living Twice is a prism refracting a radical world and a compelling life. 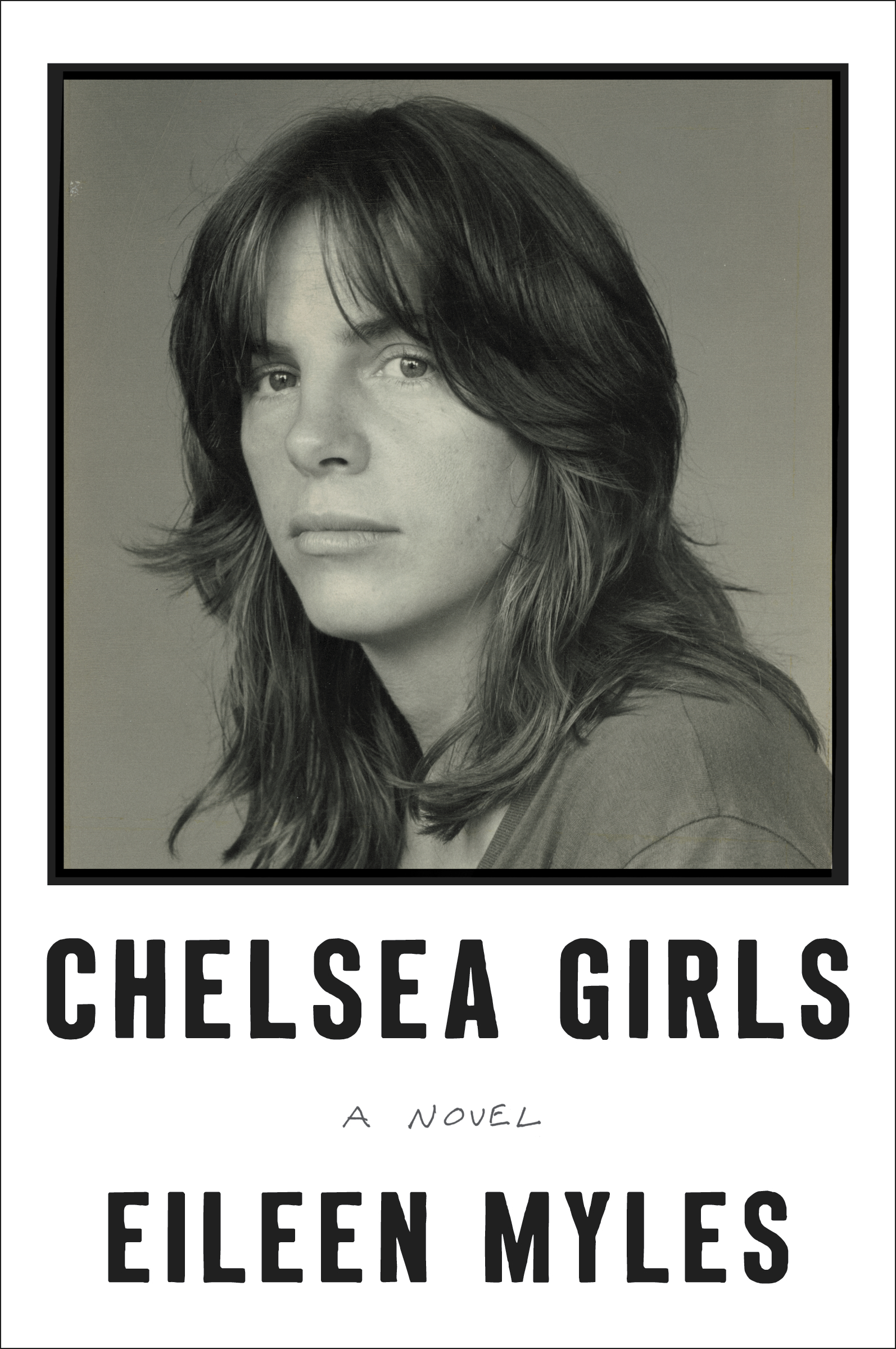 In this breathtakingly inventive autobiographical novel, Eileen Myles transforms life into a work of art. Told in her audacious voice, made vivid and immediate in her lyrical language, Chelsea Girls cobbles together memories of Myles’ 1960s Catholic upbringing with an alcoholic father, her volatile adolescence, her unabashed “lesbianity,” and her riotous pursuit of survival as a poet in 1970s New York. Suffused with alcohol, drugs, and sex; evocative in its depictions of the hardscrabble realities of a young artist’s life; and poignant with stories of love, humor, and discovery, Chelsea Girls is a funny, cool, and intimate account of a writer’s education, and a modern chronicle of how a young female writer shrugged off the chains of a rigid cultural identity meant to define her.

• “I Get High from the Radiance of Being Alive” — A Conversation

• How I Get It Done: Poet Eileen Myles — The Cut

• The Casual Poetry of Eileen Myles – The Yale Herald

• Trump Is a Performance Artist: An Interview with Eileen Myles – Paris Review

• Review of Afterglow (A Dog Memoir)  by Eileen Myles – The Guardian

• Blurring the boundaries of genre, An interview with Eileen Myles – The McGill Daily

• Inside the Minds of Very Good Dogs – The New Yorker

• Interview: Eileen Myles Has Always Been Cooler Than You — Vice

• The ‘Afterglow’ that pets leave behind – Minnesota Public Radio

• Of Dogs and Mailmen – Slate

WHAT TREE AM I WAITING

That whole part of the world
where I won’t go any-
more
that whole separation
that I won’t feel
high in this house
in this hemisphere
in this artificial light
that is artificial
in the earliest morning; dark
in pages and pens
in an unfamiliar bed
in the foot curl
furniture
each rumble
when morning comes
and it’s still morning
and it’s still night
I married a dead girl
we were born in her bloom
remember that fat bumblebee
landed on a lamp
I opened the doors
and I forgot and the house
got colder and colder
where is this house
the seam between boards
merely gains my attention
it’s dark and thin
I monitor each situation
my bladder growing full
climb down climb up
what tree am I waiting
my whole life in weather
waiting for my raft
I’ll fly to another island
I’ll take a train
already I know
it will hurt
this is the hurt country
I came here
to hold the hurt like a bird
like a tree
traffic has rings
we watch it whirl around
damaging our night
great continents hold
the feelings and the ages
what is mine
going blind
great masses of them
not going home
the country drew a line
because of memory
one said
I feel my heart race ahead
in eternity there is this ache
there is this wakefulness

— from I Must Be Living Twice 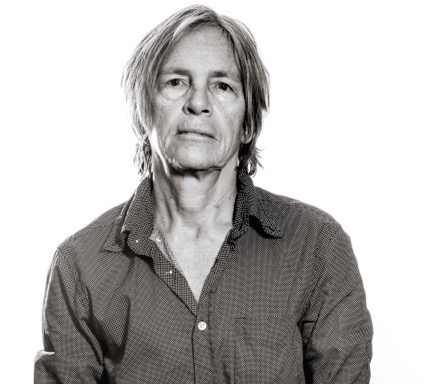