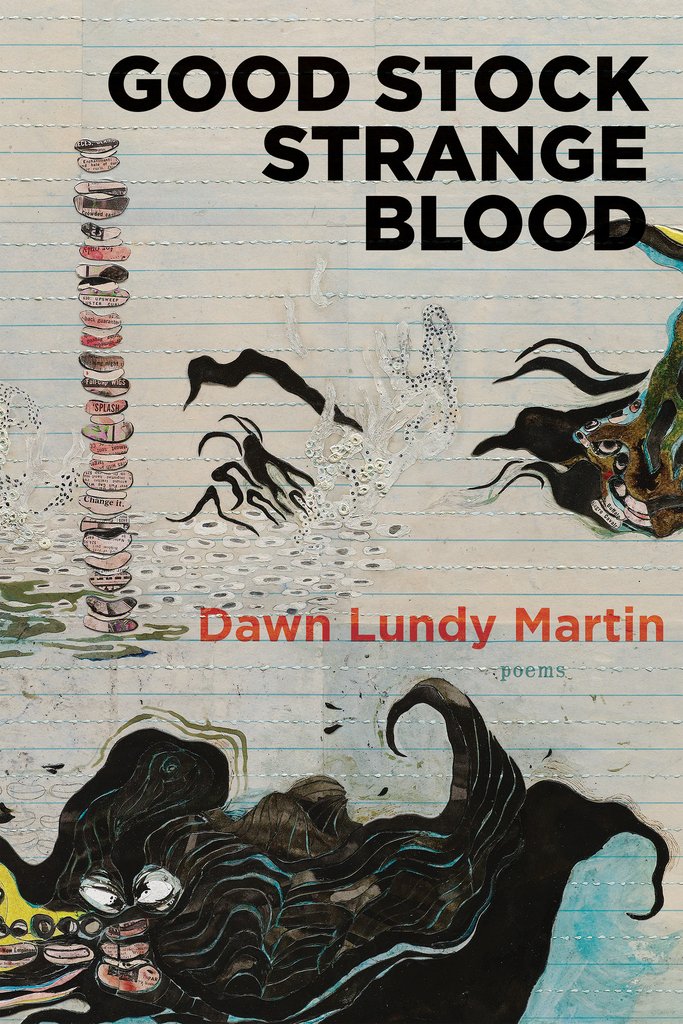 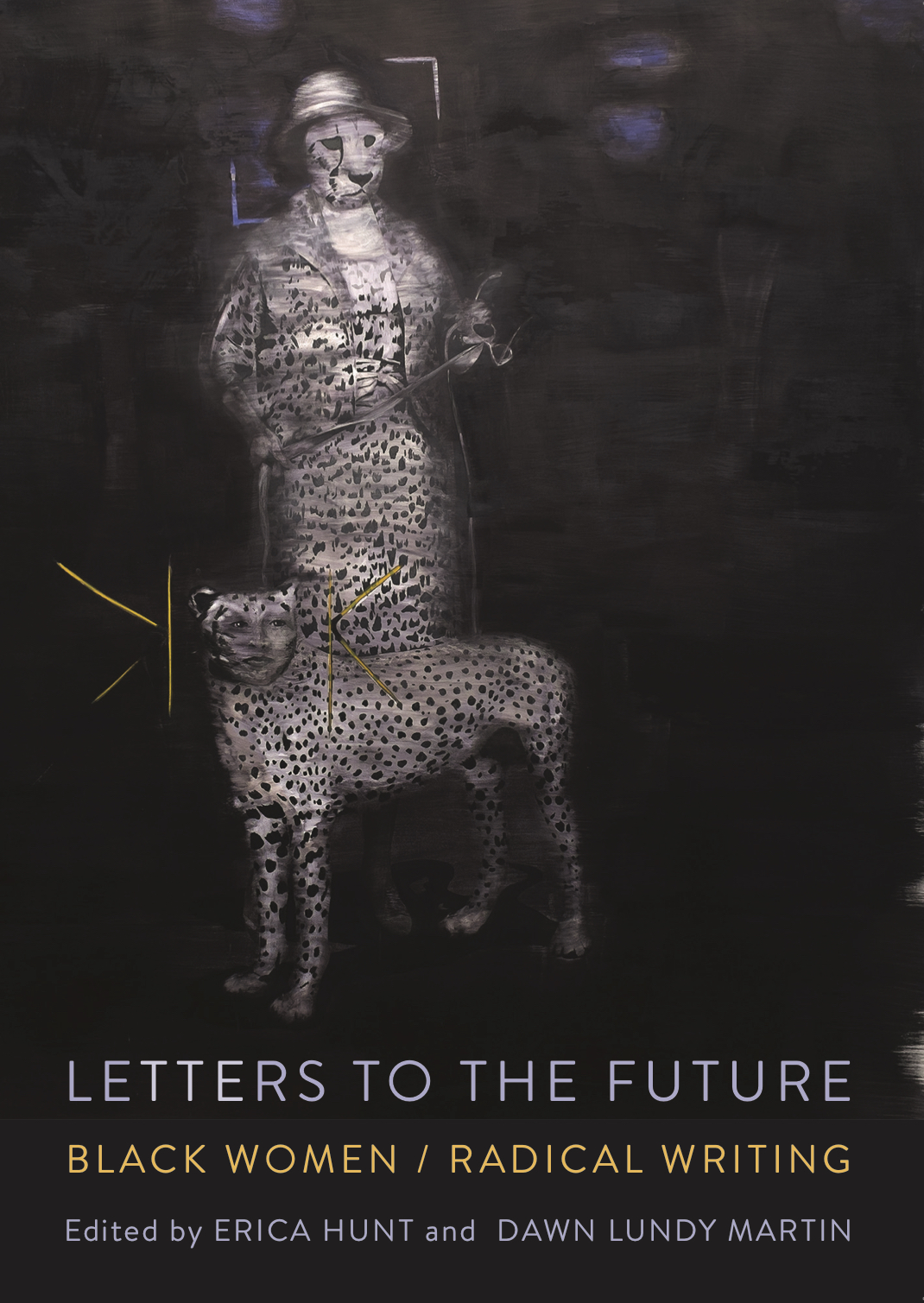 “One of the many things I admire about Dawn Lundy Martin’s poetry is her potent ability to puzzle the reader without losing the reader. To puzzle is not the same as to baffle. When I am baffled, I throw up my hands. When I am puzzled, I look deeper. And this is what Martin’s speaker wants all of us to do, I daresay: to look deeper, to puzzle harder. “ —Lambda Literary

Poet, critic, and essayist Dawn Lundy Martin is the author of four poetry collections and editor of two anthologies. Her book Good Stock Strange Blood (2017)—bold, formally innovative prose poems that challenge our ideas of race, voice, bodies, and justice—won the Kingsley Tufts Award. Life in a Box is a Pretty Box (2015), in which Martin investigates what is produced in the interstices between the body, experience, and language, and how alternative narratives can yield some other knowledge about what it means to be black (or female, or queer) in contemporary America, received the LAMBDA Award for Lesbian Poetry. DISCIPLINE (2011) won the Nightboat Books Poetry Prize, selected by Fanny Howe, and was a finalist for a Los Angeles Times Book Award. A Gathering of Matter / A Matter of Gathering (2007), won the Cave Canem Prize, selected by Carl Phillips. She has also published the limited edition chapbooks Candy, The Main Cause of the Exodus, and The Morning Hour. On Good Stock Strange Blood, Maggie Nelson wrote: “Dawn Lundy Martin’s poems read like a real-time excavation of what poetry can and can’t do; how the past is never past; how to stand in the blur, the ‘griefmouth’ of personal and collective pain, and somehow make thought, make fury, make song.”

She is the co-editor of the seminal anthology Letters to the Future: Black WOMEN / Radical WRITING (2018), hailed by Publisher’s Weekly as an “exceptional anthology, which operates like a master class in the variety and virtuosity of black women’s art,” and The Fire This Time: Young Activists and the New Feminism (2004), which uses a gender lens to describe and theorize young activist work in the U.S.

Martin is the co-founder of the Third Wave Foundation (New York), an organization, which was for 15 years the only young activist feminist foundation in the US. Martin continues her activist work in collaboration with foundations and activist organizations to research and strategize about protecting the lives and freedoms of women and girls. Using a intersectional lenses that bring together feminism with racial justice and LGBTQ rights, Martin works to provide analytical frameworks that assist philanthropic organizations in strategic philanthropy to level the playing field and animate social justice reforms.

Her current creative-scholarly work operates in the intersecting fields of experimental poetics, video installation, and performance. Her video installation work has been featured at the Museum of Contemporary Art Detroit. Martin has also written a libretto for a video installation opera, titled “Good Stock on the Dimension Floor,” featured in the 2014 Whitney Biennial, and collaborated with architect Mitch McEwen on Detroit Opera House, a conceptual architecture project.

Her writing can be found in numerous publications, including The New Yorker, Harper’s Magazine, n+1, BOMB Magazine, and Brooklyn Rail. She is currently at work on a memoir.

Martin is the recipient of numerous awards including the Kingsley Tufts Poetry Award, the Cave Canem Prize, the Nightboat Books Poetry Prize, and the Lambda Literary Award for Lesbian Poetry. She has also been a finalist for the Los Angeles Times Book Prize and has received grants and fellowships from NEA, The Poetry Society of America, the Pittsburgh Foundation, the Heinz Endowments, and the Whiting Foundation.

She is a Professor of English in the University of Pittsburgh’s Writing Program, where she also serves as the director of the Center for African American Poetry and Poetics (CAAP), which she co-founded with Terrance Hayes in 2016. She resides in Brooklyn, NY and Pittsburgh, PA.

Dawn Lundy Martin is a poet, essayist, and conceptual video artist. She is the author of four books of poems: Good Stock Strange Blood; Life in a Box is a Pretty Life; which won the Lambda Literary Award for Lesbian Poetry; DISCIPLINE; A Gathering of Matter / A Matter of Gathering; and three limited edition chapbooks. Most recently, she co-edited with Erica Hunt an anthology, Letters to the Future: BLACK WOMEN / Radical WRITING. Her nonfiction can be found in The New Yorker, Harper’s, n+1, and elsewhere. Martin is a Professor of English in the writing program at the University of Pittsburgh and Director of the Center for African American Poetry and Poetics. She is the recipient of the 2019 Kingsley Tufts Poetry Award.

“Hunt and Martin treat the intersection of blackness and womanhood with deserved complexity and curiosity in this exceptional anthology, which operates like a master class in the variety and virtuosity of black women’s art.” —Publisher’s Weekly

A collection of poems, essays, elder conversations, and visual works, Letters to the Future: Black WOMEN / Radical WRITING, celebrates temporal, spatial, formal, and linguistically innovative literature. The anthology collects late-modern and contemporary work by Black women from the United States, England, Canada, and the Caribbean—work that challenges readers to participate in meaning making. Because one contextual framework for the collection is “art as a form of epistemology,” the writing in the anthology is the kind of work driven by the writer’s desire to radically present, uncovering what she knows and does not know, as well as critically addressing the future.

“Every time I read Good Stock Strange Blood, a new book awaits me. Which is to say, it’s got trapdoors, trick sleeves; it takes swerves, detours, and dives. Dawn Lundy Martin’s poems read like a real-time excavation of what poetry can and can’t do; how the past is never past; how to stand in the blur, the ‘griefmouth’ of personal and collective pain, and somehow make thought, make fury, make song.” —Maggie Nelson, author of The Argonauts

Bold, formally innovative prose poems that challenge our ideas of race, voice, bodies, and justice. Martin writes: “And, yet, each morning a fireheart grief in the body coming out of sleep. The listening to the smoke as if fills and weeps inside the chest, choking strength out hands weighted, dangling. We wonder where else it lives before it fills the body up. We assume it comes inside through the hole that promises invasion.”

“Incarceration’s tortured relation to beauty is as old as the blues, as the sonnet, as Jerome’s incessant decoration of his own mind, the way he (ex)tends his interiority within a bleak and blank interior while lusting after transcendence. In Life in a Box is a Pretty Life, Dawn Lundy Martin keeps this question close. Her open secret is ravishing.” — Fred Moten

Winner of the LAMBDA Literary Award for Best Lesbian Poetry, Finalist for the The Audre Lorde Award for Lesbian Poetry from Publishing Triangle and The Firecracker Award for Independent Publishing in Poetry, Dawn Lundy Martin’s Life in a Box is a Pretty Life investigates the ways in which language claims absolute knowledge and draws a box around lived experience. Martin writes poems that seek out moments when the box buckles, or breaks, poems that suggest there is more. Life in a Box is a Pretty Life continues Martin’s investigation into what is produced in the interstices between the body, experience, and language, and how alternative narratives can yield some other knowledge about what it means to be black (or female, or queer) in contemporary America.

“These poems are dense and deep. They are necessary, and hot on the eye. I was reminded of Leslie Scalapino, the sensitivity to the surrounding arrangements and to human suffering. There is no distance from Martin’s subject, but immersion and emotional conflict. Discipline is what it took to write such a potent set of poems.” —Fanny Howe

This stunning second collection engages the “disciplines” associated with regimes of powers and sadomasochism. The work interrogates the social and linguistic space between regimes of power enacted on the body, and thereby the soul.

A GATHERING OF MATTER / A MATTER OF GATHERING (Poetry, 2007)

“It is the leap, not necessarily the landing, that forces risk and invention. Martin has taken such a leap and, in the process, invented new ways in which to engage and experience language. A Gathering of Matter / A Matter of Gathering is an ambitious debut book of poems that does not consult with convention, but rather vehemently argues with it.” — Nicole Sealey

Dawn Lundy Martin’s work is neither language poetry, which rejects the speaking subject, nor strictly lyric, which embraces the speaking “I.” It might best be described as poetry where, in the words of Juliana Spahr, “the lyric meets language”—both an investigation into the opacity of language and the expression of a passionate speaker who struggles to speak meaningfully. Martin’s poems bend the form into something new, seeking a way to approach the horrific and its effect on the psyche more fully than might be possible in the worn groove of the traditional lyric. Her formal inventiveness is balanced by a firm grounding in bodily experience and in the amazing capacity of language to expand itself in Martin’s hands. She explodes any pretense at a world where words mean exactly what we want them to mean and never more nor less. The poems are neither gentle nor easy, but they make a powerful case that neither gentleness nor easiness is appropriate in the attempt to contend with the trauma and violence that are an inescapable part of human history and human experience. Martin’s book acknowledges the difficulty but not the impossibility of utterance in trauma’s wake, and it ventures into the unimaginable at many levels, from the personal to the cultural.

THE FIRE THIS TIME: YOUNG ACTIVISTS AND THE NEW FEMINISM (Anthology, 2004)

Young feminists today are becoming activists on behalf of many causes beyond the classic—and indispensable–feminist ones of reproductive rights and equal pay for equal work. In The Fire This Time, Dawn Martin, one of four founders of The Third Wave Foundation–a multiracial, multi-issue, and multicultural activist organization–and Vivien Labaton, its first executive director, offer an exciting cross section of feminist voices that express new directions in activism, identity, and thought. Ayana Bird dissects the role of black women in hip-hop; Joshua Breitbart and Ana Noguiera demonstrate how Indimedia can break the hold of the corporate media over the news; and Jennifer Bleyer reviews the exhilarating power unleashed by the GirlZine movement. Anna Kirkland’s analysis of transsexual and transgendered people and the law is deeply thoughtful, and Shireen Lee’s piece on women, technology, and feminism envisions empowering prospects for women. Ranging from media and culture to politics and globalization, The Fire This Time is a call to new frontiers of activism, and helps reinvent feminism for a new generation.

• Read from “The Laceration” – Academy of American Poets

–MY FORM AGAINST THOSE AT BORDER–

knocking among other refugees

—the islands
—no one to help
—thousands buried by water

A butchered animal at my feet.

The rescuers are never prepared.
And we, here, amid a failure of images.

Scrub a spot whiter than before.
Demarcate before there is nothing left.

Breach into white sand. The dead ache so.

• On the Black Avant Garde – LitHub

• Because I Distrust This Mode Interview – LA Review of Books

• An Interview with Dawn Lundy Martin — Library of Congress

• Review: Life in a Box is a Pretty Life — Constant Critic