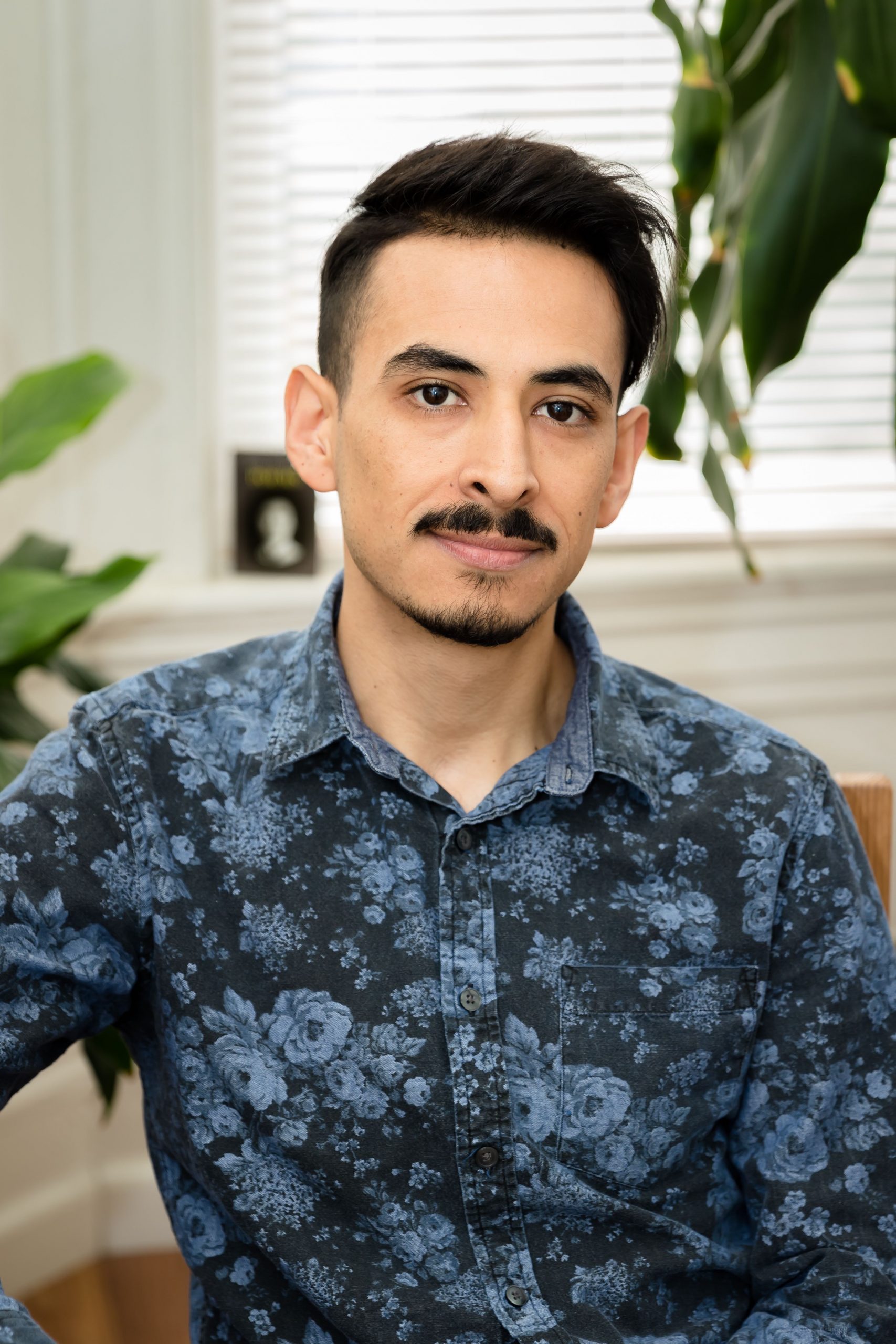 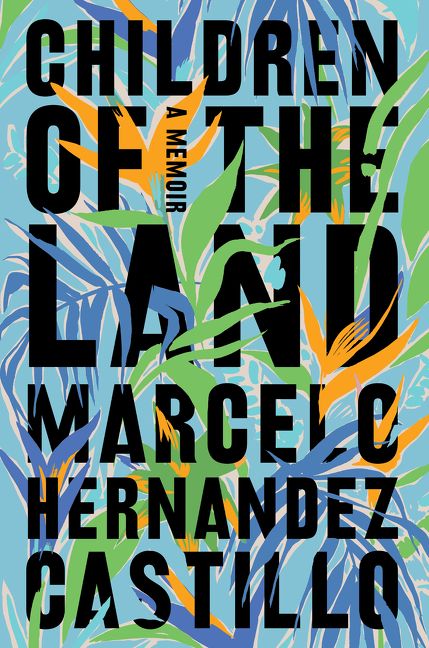 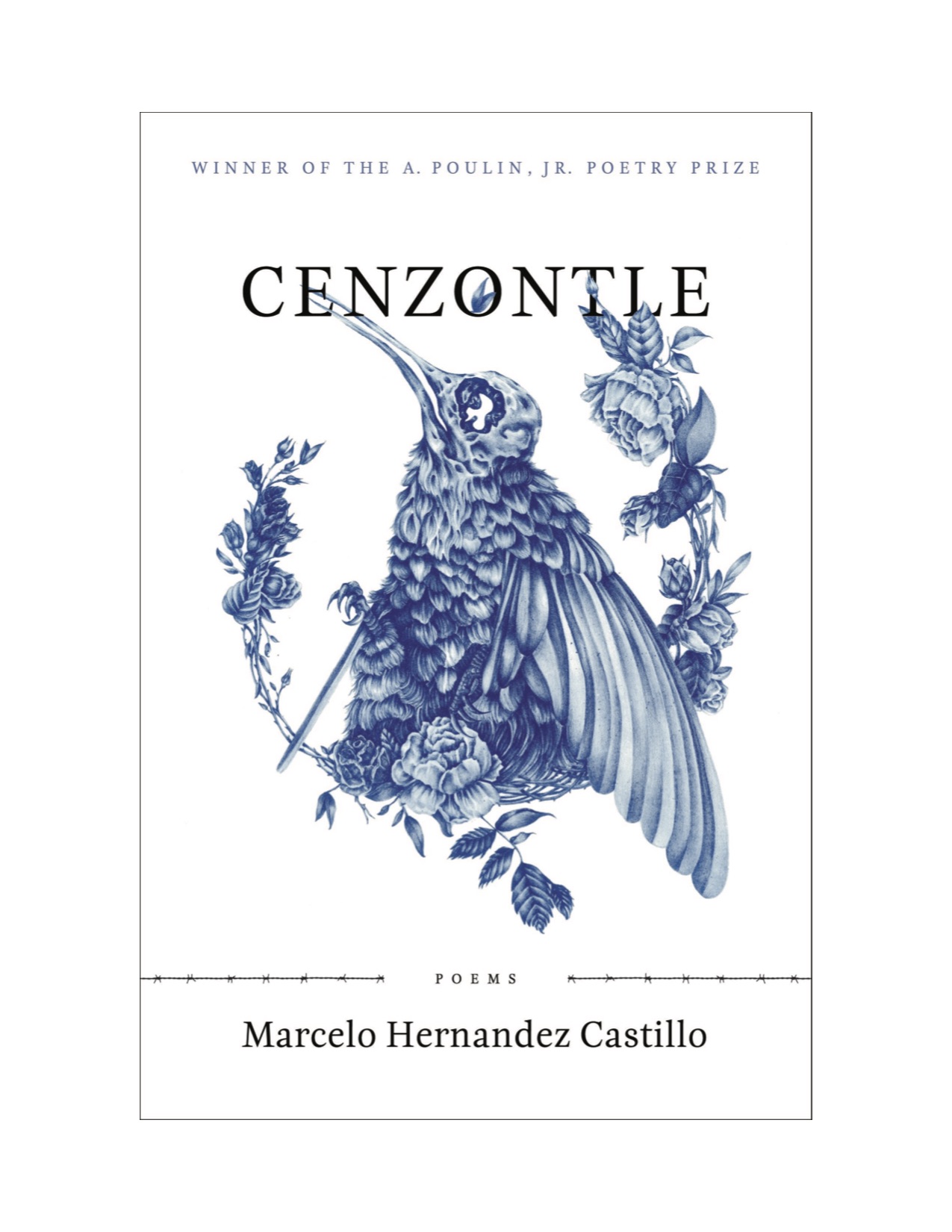 “Castillo compresses the emotional resonances of lived experience into poetic narratives of devotion, eroticism, family, labor, and migration. He make displays of fragility and power by turn, a duality drawn into relief by the precarious condition of the undocumented immigrant.” –Publisher’s Weekly

“In the spirit of Whitman, Marcelo Hernandez Castillo slips in silently to lie down between the bridegroom and the bride, to inhabit many bodies and many souls, between rapture and grief.” –DA Powell

“Castillo’s forms feel airy and fragile, but the strength of his revelations are unquestionable.” –Major Jackson

Marcelo Hernandez Castillo is a poet, essayist, translator, and immigration advocate. He is the author of Cenzontle (BOA editions, 2018), chosen by Brenda Shaughnessy as the winner of the 2017 A. Poulin Jr. prize and winner of the 2018 Northern California Book Award. Cenzontle maps a parallel between the landscape of the border and the landscape of sexuality through surreal and deeply imagistic poems. Castillo’s first chapbook, Dulce (Northwestern University Press, 2018), was chosen by Chris Abani, Ed Roberson, and Matthew Shenoda as the winner of the Drinking Gourd Poetry Prize. His memoir Children of the Land (Harper Collins, 2020) is his most recent publication and explores the ideas of separation from deportation, trauma, and mobility between borders.

Castillo was born in Zacatecas, Mexico and immigrated at the age of five with his family to the California central valley. As an AB540 student, he earned his B.A. from Sacramento State University and was the first undocumented student to graduate from the Helen Zell Writers Program at the University of Michigan. His immigration case was used by the Supreme Court to justify the Deferred Action for Childhood Arrivals (DACA) under president Obama. Castillo is a founding member of the Undocupoets campaign which successfully eliminated citizenship requirements from all major first poetry book prizes in the country and was recognized with the Barnes and Noble “Writers for Writers” award from Poets &Writers Magazine. Through a literary partnership with Amazon Publishing he has helped to establish The Undocupoet Fellowship which provides funding to help curb the cost of submissions to journals and contests.

He is the translator of the Argentinian modernist poet, Jacobo Fijman and is currently at work translating the poems of the contemporary Mexican Peruvian poet Yaxkin Melchy whose poems combine digital, environmental, and indigenous studies into a cosmopolitan melée specific to Mexico City. Castillo also co-translated the work of the Mexican poet Marcelo Uribe with C.D. Wright before her untimely passing.

Castillo’s work has been adopted to Opera through collaboration with the composer Reinaldo Moya and his work has appeared or been featured in The New York Times, PBS Newshour, People Magazine en Español, The Paris Review, Fusion TV, Buzzfeed, Gulf Coast: A Journal of Literature and Fine Arts, New England Review, and Indiana Review, among others. He currently teaches in the Low-Res MFA program at Ashland University. He lives in Marysville, California, with his wife and son.

Marcelo Hernandez Castillo is the author of Children of the Land: a Memoir; Cenzontle, which was the winner of the A. Poulin, Jr. prize; and Dulce, winner of the Drinking Gourd Prize. He is a founding member of the Undocupoets, which eliminated citizenship requirements from all major poetry book prizes in the U.S,  and was recognized with the Barnes and Noble Writers for Writers award. He was the first undocumented student to graduate from the Helen Zell Writers Program at the University of Michigan. He currently teaches in the creative writing program at St. Mary’s University, and the Ashland Low-Res MFA Program, as well as poetry workshops for incarcerated youth in Northern California as the Yuba and Sutter County poet laureate.

Children of the Land

When Marcelo Hernandez Castillo was five years old and his family was preparing to cross the border between Mexico and the United States, he suffered temporary, stress-induced blindness. Castillo regained his vision, but quickly understood that he had to move into a threshold of invisibility before settling in California with his parents and siblings. Thus began a new life of hiding in plain sight and of paying extraordinarily careful attention at all times for fear of being truly seen. Before Castillo was one of the most celebrated poets of a generation, he was a boy who perfected his English in the hopes that he might never seem extraordinary. With beauty, grace, and honesty, Castillo recounts his and his family’s encounters with a system that treats them as criminals for seeking safe, ordinary lives. He writes of the Sunday afternoon when he opened the door to an ICE officer who had one hand on his holster, of the hours he spent making a fake social security card so that he could work to support his family, of his father’s deportation and the decade that he spent waiting to return to his wife and children only to be denied reentry, and of his mother’s heartbreaking decision to leave her children and grandchildren so that she could be reunited with her estranged husband and retire from a life of hard labor. Children of the Land distills the trauma of displacement, illuminates the human lives behind the headlines and serves as a stunning meditation on what it means to be a man and a citizen.

In this highly lyrical, imagistic debut, Marcelo Hernandez Castillo creates a nuanced narrative of life before, during, and after crossing the US/Mexico border. These poems explore the emotional fallout of immigration, the illusion of the American dream via the fallacy of the nuclear family, the latent anxieties of living in a queer brown undocumented body within a heteronormative marriage, and the ongoing search for belonging. Finding solace in the resignation to sheer possibility, these poems challenge us to question the potential ways in which two people can interact, love, give birth, and mourn―sometimes all at once. 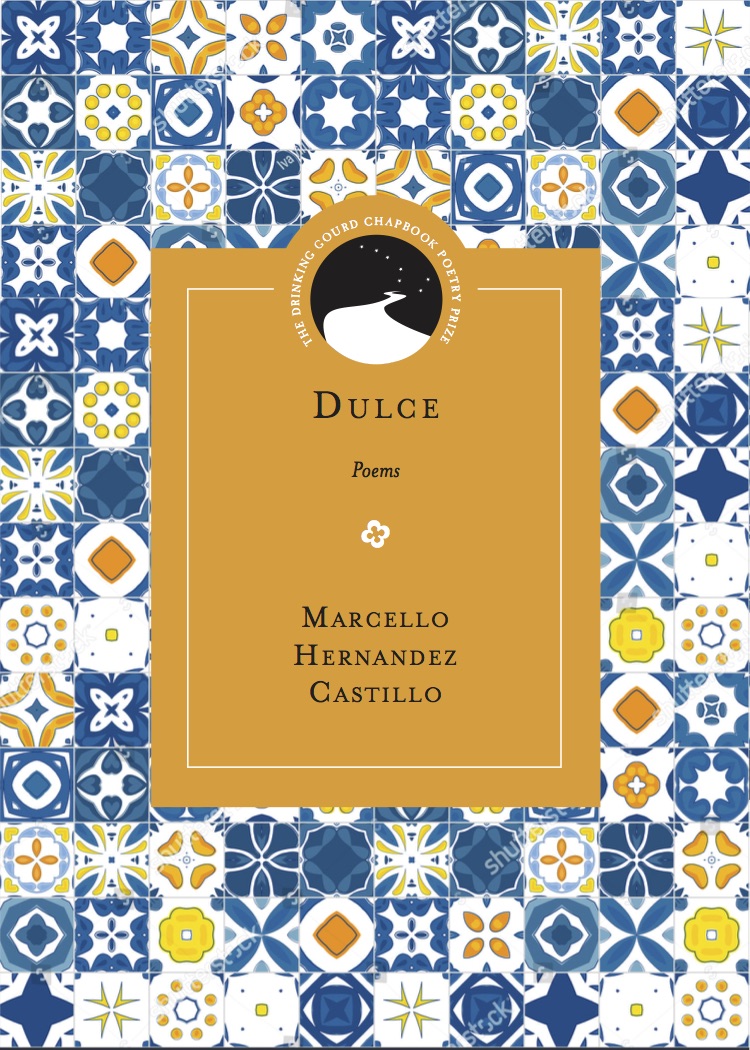 The poems in Dulce are at once confession and elegy that admit the speaker’s attempt and possible failure to reconcile intimacy toward another and toward the self. The collection asks: what’s the point in any of this?–meaning, what’s the use of longing beyond pleasure; what’s the use of looking for an origin if we already know the ending?

• Marcelo Hernandez Castillo on Children of the Land – NPR

FIELD GUIDE ENDING IN DEPORTATION
I confess to you my inadequacies. I want to tell you things I do not know about myself. I’ve made promises to people whom I will never see again. I’ve cried in an airport bathroom stall in El Paso, TX when immigration denied my father’s application. It felt like a mathematical equation—everything on one side needed to equal everything on the other. It almost made sense to be that sad. I am not compelled to complicate this metaphor. I’m selling this for two dollars. Years ago, on my birthday, I came out to my friends. I thought about the possibility of painting their portraits. What a stupid idea. I’ve started to cover up certain words with Barbie stickers in my journal. It occurs to me, sitting in my car, at a Dollar General parking lot, in search of cheap balloons for a party which I do not care about, that I am allowed my own joy. I pick the brightest balloons, pay, drive home and dress for the party. I mouth the words happy birthday to you in a dark room lit by everyone’s phone cameras. Afterwards, I enter all of my emails from five years into a cloud engine and the most used word is ok. I confess that I have had a good life. I spend many nights obsessing over the placement of my furniture. I give you my boredom. I give you my obligation. I give you the night I danced and danced and danced at a child’s birthday party, drunk and by myself. I’ve been someone else’s shame. It’s true, at its core, amá was deported because she was hit by a car. For years to come, this will be the ending of a sad joke she likes to tell. I laugh each time she tells the joke to strangers. Something about how there is more metal than bone in her arm. Something about a magnet. She says I thought I had died and death meant repeating a name forever. She says el jardin encierra la boca de mis pasos. But this is a bad translation. It’s more like I felt like a star, I felt like somebody famous. 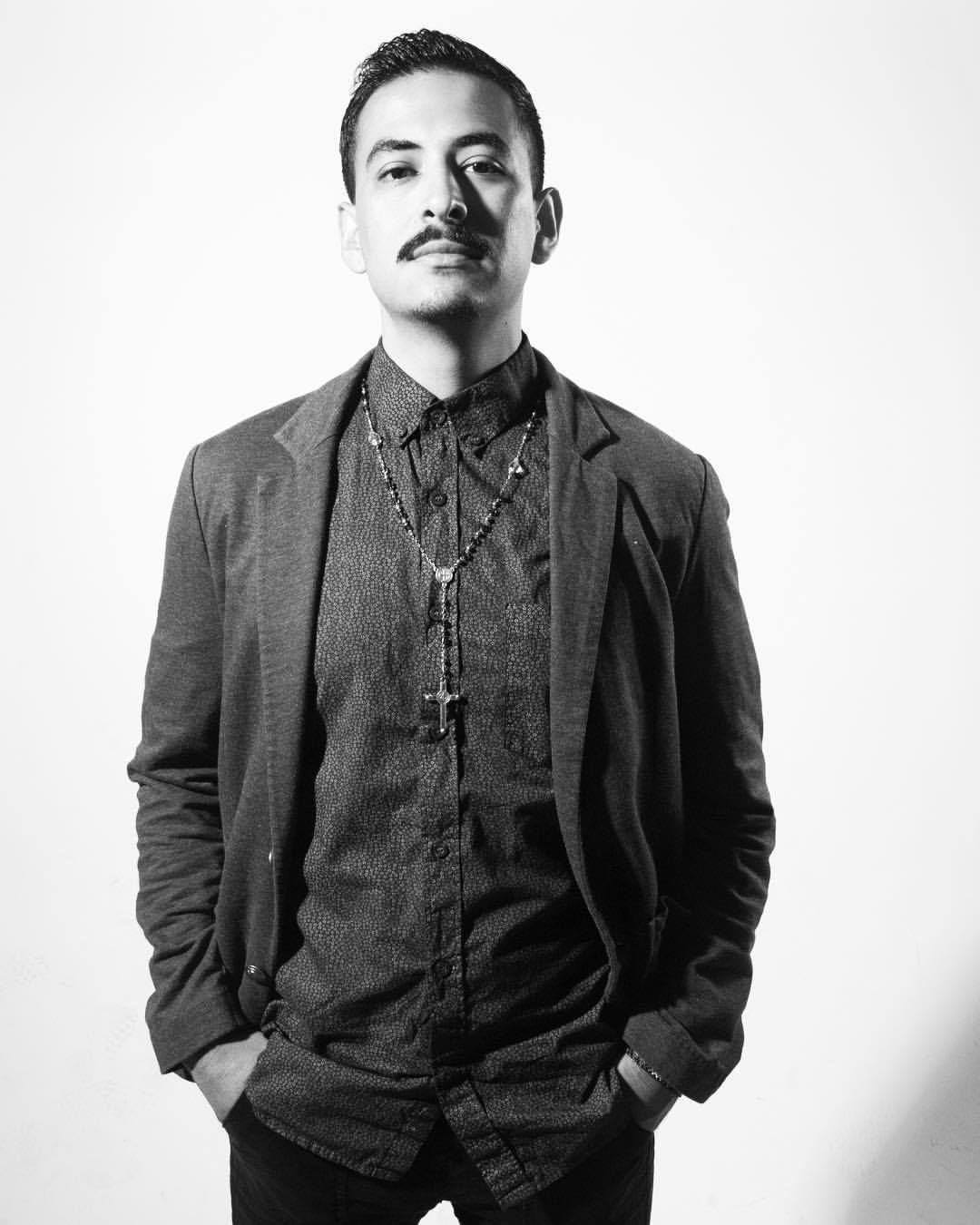