“Alberto Ríos is a poet of reverie and magical perception, and of the threshold between this world and the world just beyond. With humor, compassion, and intelligence, Ríos’s poems overlay a child’s observation and imagination onto our society of daily inequity, poverty, and violence. The light of memory shines on culture, language, family, neighbors, and friends saving them all in stories that become legends, a light so sensual and full it is ‘swallowed into the mouth of the eye, / into the throat of the people.'”—National Book Award Judges’ Comments on presenting the National Book Award finalist medal to Alberto Ríos

“Ríos’ poems follow a path of wonder and gently move us to emotional truths that grab our breath and link our inner and outer landscapes. His alchemy works a transformation in the inner vision, turning us toward the deeper mystery of life itself.”—American Book Review

“Ríos’s project, indebted to magic realism but rooted in naturalism, proves ambitious. He deftly uses the couple—members, he says, of his ‘extended family’—to explore liminal spaces: they live in a border town surrounded by invisible walls, a place where the divide between body and soul, and body and body, narrows” —The New Yorker

Alberto Ríos is the author of fourteen books and chapbooks of poetry, three collections of short stories, and a memoir. He has garnered acclaim as a writer who uses language in lyrical and unexpected ways, also containing elements of magical realism, to reflect on his Chicano heritage. The son of a Mexican father from Tapachula, Chiapas, and an English mother from Warrington, Lancashire, Ríos was raised on the American side of the city of Nogales, Arizona, on the Mexican border. Growing up in Spanish-speaking family in a community where he was forced to speak English in school, led Ríos to develop a third language: “Growing up on the cusp of two cultures…undoubtedly influenced and broadened my view of what is possible in the world. For example, Hispanics and a variety of other cultures believe that humans are partners to the world rather than rulers of it. In English, one might say, I dropped the glass, while in Spanish, that same moment might be articulated as, The glass, it fell from me. English assumes human responsibility for the dropped glass, whereas Spanish assumes the glass itself is something of a sentient participant in the action. For me, this allows the world and its ways to be an active and unpredictable part of my work.” Ríos artfully captures this dual awareness in his poetry and prose.

Ríos is the recipient of the Western Literature Association Distinguished Achievement Award, the Arizona Governors Arts Award, fellowships from the Guggenheim Foundation and the National Endowment for the Arts, the Walt Whitman Award, and his poems have been included in The Norton Anthology of Modern Poetry as well as in over 250 national and international literary anthologies. His work is regularly taught and translated, and has been adapted to dance and both classical and popular music. Ríos hosts the PBS show Art in the 48, which showcases artists and arts organizations in Arizona. He is the Regents Professor at Arizona State University, where he serves as the Katharine C. Turner Endowed Chair in English. In 2013, Ríos was named Arizona’s first poet laureate. He is a former chancellor of the Academy of American Poets.

Alberto Ríos, award-winning writer and Arizona’s first poet laureate, is the author of thirteen books of poetry, three collections of short stories, and a memoir. The son of a Mexican father from Tapachula, Chiapas, and an English mother from Warrington, Lancashire, Ríos was raised on the American side of the city of Nogales, Arizona, on the Mexican border. Ríos is the recipient of the Arizona Governors Arts Award, fellowships from the Guggenheim Foundation and the National Endowment for the Arts, the Walt Whitman Award, the Western States Book Award for Fiction, and his poems have been published in 250 other national and international literary anthologies. His work is regularly taught and translated, and has been adapted to dance and both classical and popular music. He is a chancellor of the Academy of American Poets and resides in Chandler, Arizona.

Not Go Away is My Name

Resistance and persistence collide in Alberto Rios’s sixteenth book, Not Go Away Is My Name, a book about past and present, changing and unchanging, letting go and holding on. The borderline between Mexico and the U.S. looms large, and Ríos sheds light on and challenges our sensory experiences of everyday objects. At the same time, family memories and stories of the Sonoron desert weave throughout as Ríos travels in duality: between places, between times, and between lives. In searching for and treasuring what ought to be remembered, Ríos creates an ode to family life, love and community, and realizes “All I can do is not go away. / Not go away is my name.”

A Small Story About the Sky

In his thirteenth book, Alberto Rios, Arizona’s first poet laureate, casts an intense desert light on rich stories unfolding along the Mexico-US border. Peppered with Spanish culture and touches of magical realism, the objects of ordinary life—showers, spilled birdseed, winter lemons—become explorations of mortality and humanity, and the many possibilities of how life might yet be lived.

“Wonderfully odd, sometimes sad, never predictable. Rios continually surprises us in the way he stretches the meaning of words, turning them this way and that.” —San Francisco Chronicle

Ríos’s new poems—magical wormholes through mundane reality—create an improbably true space where human bodies fall through floorboards, prickly feelings of limbs fallen asleep are stars buzzing under the skin, and ironed shirts hanging in a closet take on a foreboding sense of danger. Together they are a book of magical realism and cultural physics seeking the also-moment—the probable and imaginative directions a single moment might become. 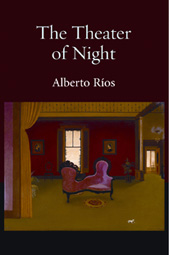 The Theater of Night

Ríos’s collection is filled with magic, marvel, and emotional truth. Set within a community along the border between the US and Mexico, his poems trace the lives and loves of an elderly couple, Clemente and Ventura, through their childhoods, their courtship and into marriage, maturity, old age, and death. Ríos’s narratives are both surreal and hyper-real, and from within the community of these two lives he creates a striking geography unlike any other in American poetry. 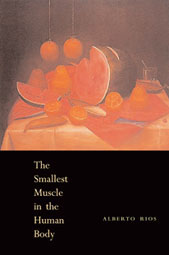 The Smallest Muscle in the Human Body

“Whether talking about the smell of food, the essence of a crow or a bear’s character or of hard-won human wisdom, Ríos writes in a serenely clear manner that enhances the drama in the quick scenes he summons up.”—The New York Times Book Review

Alberto Ríos explains the world not through reason but magic. These poems—set in a town that straddles Mexico and Arizona—are lyric adventures, crossing two and three boundaries as easily as one, between cultures, between languages, between senses. Drawing upon fable, parable, and family legend, Ríos utilizes the intense and supple imagination of childhood to find and preserve history beyond facts: plastic lemons turning into baseballs, a grandmother’s long hair reaching up to save her life, the painted faith jumpers leaping to the earth and crowd below.

Capirotada, Mexican bread pudding, is a mysterious mixture of prunes, peanuts, white bread, raisins, milk, quesadilla cheese, butter, cinnamon and cloves, Old World sugar—”all this,” writes Alberto Rios, “and things people will not tell you.” Capirotada’s uncommon offering is how it stops to address the quiet, the overlooked, the every day side of growing up in a series of vignettes. Like its Mexican namesake, this memoir stirs together Rios’s memories of family, neighbors, friends, and secrets from his youth in the two Nogaleses—in Arizona and through the open gate into Mexico.

THE CURTAIN OF TREES

The Curtain of Trees re-creates a time and place largely forgotten these days except by grandparents and elders. Set along the Arizona-Mexico border, these stories engage the gulf between Mexican and Chicano, aunt and nephew, sister and sister, sanity and madness. Sometimes the gulf cannot be spanned; sometimes it is non-existent. Reflecting on a land untouched by modernity, where the town crier dresses up as a bear to spread the news, where everybody takes care of the wandering boy named Gustavo, where family lineage means hospitable passage through a distant town. Like so many family stories told on long afternoons, the tales in The Curtain of Trees are authentic, touching, and fantastically unbelievable.

“If Laura (Like Water for Chocolate) Esquivel had written Winesburg, Ohio, the results would have been something like this remarkable collection of stories. Ríos has created a delightful universe centered in a tiny village in northern Mexico, weaving together the stories of several of its citizens over a period stretching roughly from the turn of the century to the mid-1950s. This is a delightful book for all discerning readers.” —Booklist

Set in a northern Mexican village over several decades of the 20th century, Pig Cookies traces the lives of its citizens throughout these volatile times. At the center of the stories is Lazaro Luna, a baker overcome by love, who one day mixes a “batter of surprise” from which comes a unique batch of pig cookies, treats to which children “gave… all the names they had previously held in trust for various dolls they had hoped to receive.” These poignant, funny tales of the rich, unsuspected inner lives of regular folk transcend time and place.

• Interview with Alberto Rios: Finding Inspiration in a Pandemic – KJZZ

• Rios on the Power Of Or – NPR All Things Considered

• Read “A Small Story about the Sky” — Poetry Foundation

• Read “The Cities Inside Us” — Academy of American Poets

I have crossed the border by going under the fence,
Crawling through one of its many tears.
This is no news:
People cross this way every day.
For us who lived there it was a game
But for those passing through, it was a life.
Once, I sat on the cement footing,
The fence pulled up enough for me to sit there,
Its wires in my hands, and — in that moment —
I felt the fence as an instrument.
My fingers strummed it, tried to play it
But no music came forth. No song.

The wires were too stiff, with no give.
It would not be a guitar, no mandolin.
It simply made the dull rasp of a fence
Bothered, rough on the fingers,
A little dry,
A little dangerous. 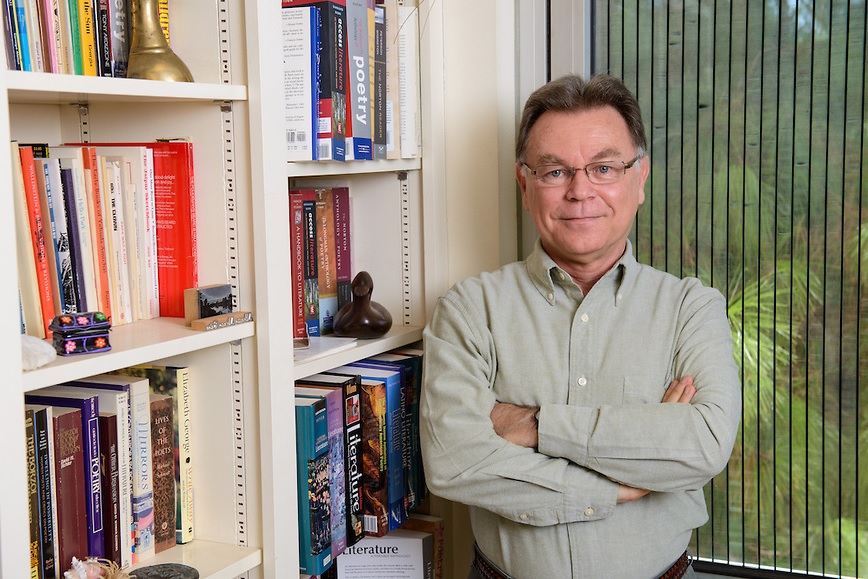 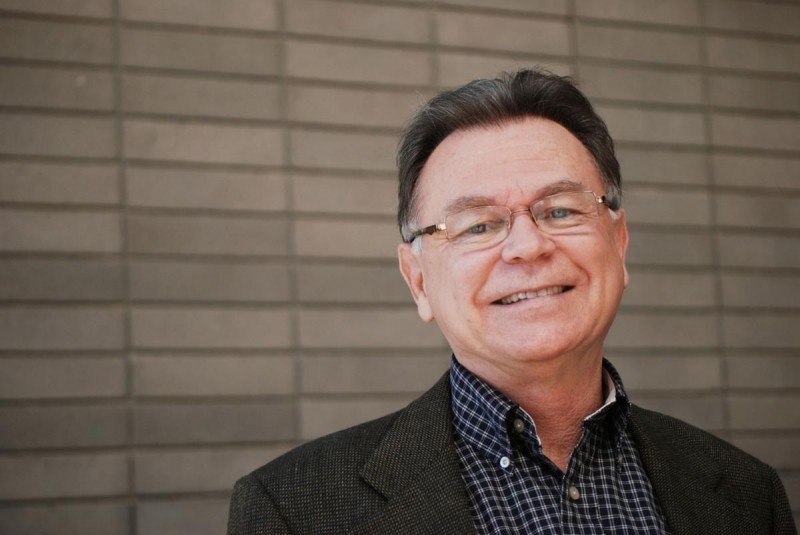 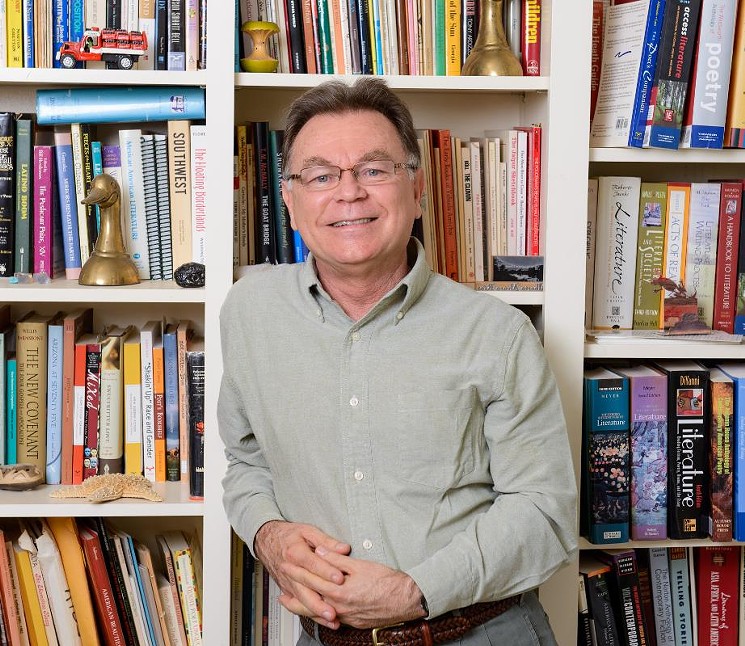