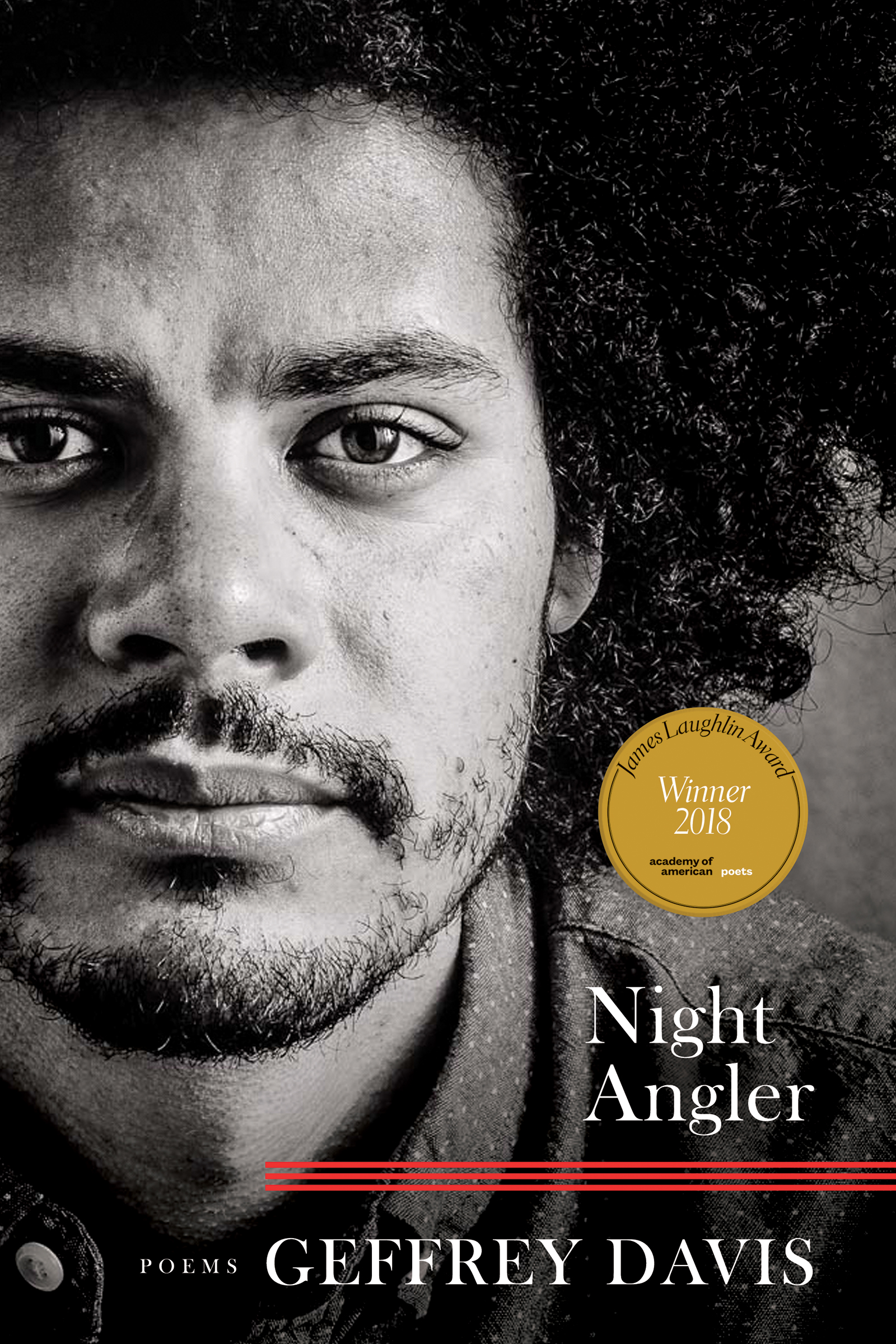 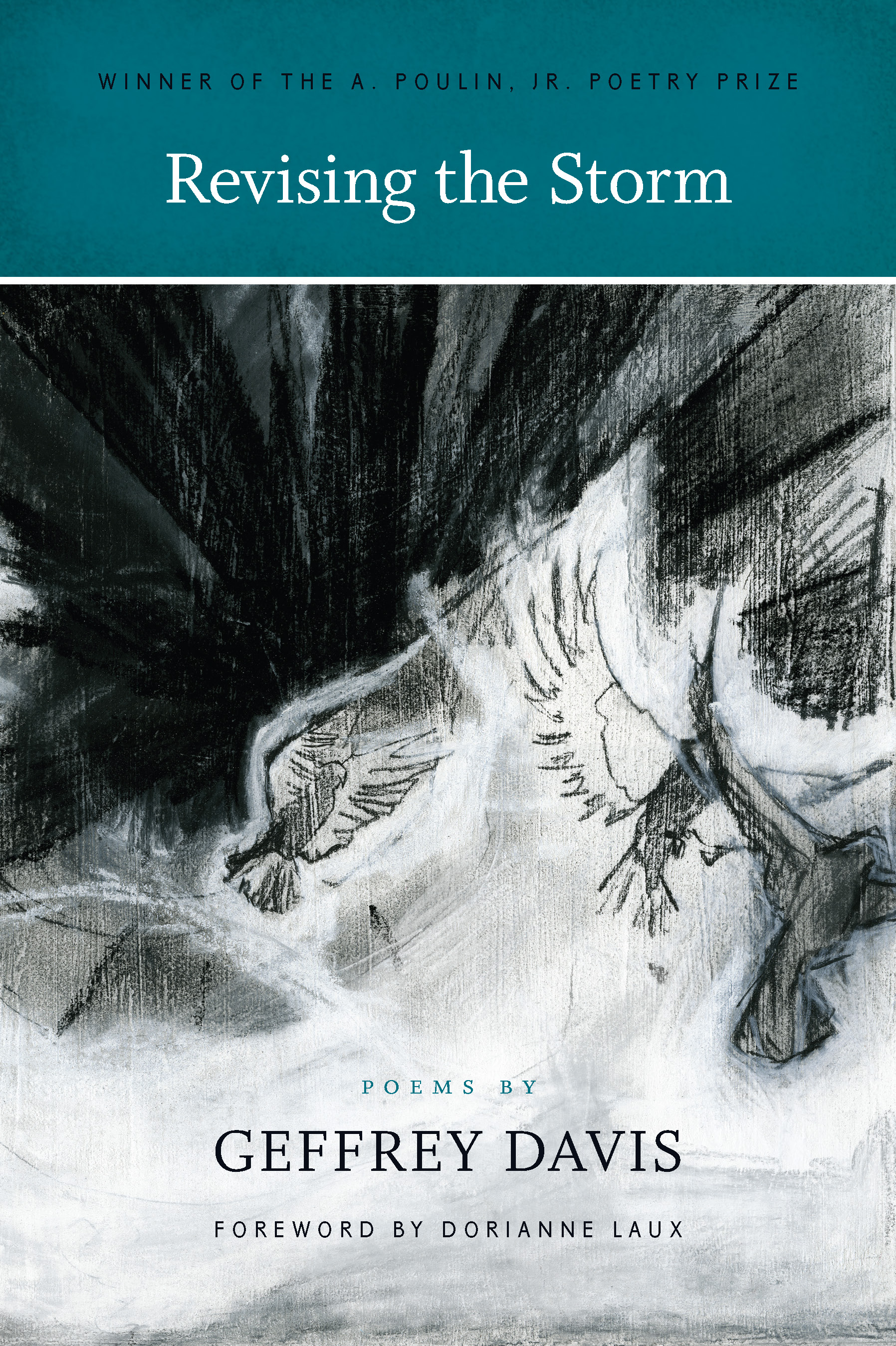 “All his subjects, even the loathsome ones, are beloved. All his speakers are filled with hope, always seeking a new definition for humane, constantly revising the storms inside themselves.” —The Rumpus

Geffrey Davis is the author of two full collections of poetry: Night Angler (BOA Editions, 2019) and Revising the Storm ​(BOA Editions, 2014), winner of the A. Poulin Jr. Poetry Prize and a Hurston/Wright Legacy Award Finalist. Oliver de la Paz reflects about Night Angler: “The poems in Geffrey Davis’s Night Angler sing in both ecstatic joy and tremendous lament. We partake in the rituals of fatherhood―both coming into and growing out of the spiritual bond. We witness the anguish of loss but also the possibilities of childhood. And in that threshold between life and death where all fathers and sons traverse, the brilliant harmonies of understanding arise in rainbowed arcs like epiphanic trout rising to kiss the sun. Poetry and prayer have never shared so close a breath.” He is also the author of the chapbook Begotten (URB Books, 2016), coauthored with F. Douglas Brown.

About Revising the Storm LA Review of books observes, “A mother crying alone in her kitchen, a hungry boy unable to sleep in his bed, the unbearable weight cast by an absent father—these quotidian and universal miseries are by no means exclusive to the world of poetry, but when rendered in verse by a talented poet such as Davis, readers bare witness with new eyes. Revising the Storm is a considerable collection replete with the dark troubles and misfortunes of life that only serve to make its moments of beauty that much brighter.”

His honors also include a 2019 NEA Grant for Creative Writing, the Anne Halley Poetry Prize, the Dogwood Prize in Poetry, the Wabash Prize for Poetry, an Academy of American Poets Prize, and fellowships from Bread Loaf, Cave Canem, and the Vermont Studio Center. His poems have been published or are forthcoming in Crazyhorse​, ​Mississippi Review, New England Review, ​New York Times Magazine, The New Yorker, PBS NewsHour, Ploughshares, and elsewhere.

​A native of the Pacific Northwest, Davis teaches for the University of Arkansas’s MFA in Creative Writing & Translation and for The Rainier Writing Workshop low-residency MFA program. He also serves as poetry editor for Iron Horse Literary Review.

Geffrey Davis is the author of two full collections of poetry: Night Angler (BOA Editions, 2019) and Revising the Storm ​(BOA Editions, 2014), winner of the A. Poulin Jr. Poetry Prize and a Hurston/Wright Legacy Award Finalist. He is also the author of the chapbook Begotten (URB Books, 2016), coauthored with F. Douglas Brown. His poems have been published or are forthcoming in Crazyhorse​, ​Mississippi Review, New England Review, ​New York Times Magazine, The New Yorker, PBS NewsHour, Ploughshares, and elsewhere. ​A native of the Pacific Northwest, Davis teaches for the University of Arkansas’s MFA in Creative Writing & Translation and for The Rainier Writing Workshop low-residency MFA program.

NIGHT ANGLER (2019)
Geffrey Davis’s second collection of poems reads as an evolving love letter and meditation on what it means to raise an American family. In poems that express a deep sense of gratitude and wonder, Davis delivers a heart-strong prayer that longs for home, for safety for black lives, and for the messy success of breaking through the trauma of growing up during the crack epidemic to create a new model of fatherhood. Filled with humor and tenderness, Night Angler sings its own version of a song called grace―sung with a heavy and hopeful mix of inherited notes and discovered chords.

FLOODGATE (2016)
Floodgate Poetry Series Vol. 3 collects three chapbooks in a single volume: brothers Anders and Kai Carlson-Wee’s Northern Corn invites us on a trip across an America of dust, trains, poverty, dignity, and dreams; Begotten, co-written by Cave Canem fellows F. Douglas Brown and Geffrey Davis, bravely and tenderly explores fatherhood in the era of Black Lives Matter; and Enid Shomer’s Driving through the Animal lovingly moves between unflinching witness of destruction and hope for the future.

REVISING THE STORM (2014)
This debut collection by Cave Canem fellow Geffrey Davis burrows under the surface of gender, addiction, recovery, clumsy love, bitterness, and faith. The tones explored—tender, comic, wry, tragic—interrogate male subjectivity and privilege, as they examine their “embarrassed desires” for familial connection, sexual love, compassion, and repair. Revising the Storm also speaks to the sons and daughters affected by the drug/crack epidemic of the ’80s and addresses issues of masculinity and its importance in family.

• poem-a-day: For the Child’s Mole — Academy of American Poets

The Epistemology of Rosemary

Together in the garden, a cigarette cradled
between her ﬁngers, she tells me of breeding

cockatiels—clutch after successful clutch, and what
she can’t forget: the time of one-too-many and

the smallest chick pushed from the nest.
How she thought mistake and put it back again,

only to see the same, simple denial.
And then, for days, trying to make her hands

avian, to syringe-feed the bird into flight.
One thin month lies between us and our miscarriage,

and I feel her grow silent under the new vastness
of this wreckage. I try to talk about my father

breaking blighted pigeon eggs: at twelve, I thought
patience and pressed him to wait, one week, then two,

until frustration set and he crushed the shells
before me, against the coop. I wanted to gather up

each shard, to will those gossamer embryos
into growth again— What do we rescue

now, at home, gleaning herbs in the evening,
as swallows swerve in the fallow air? I lean over

• The Pen Ten: An Interview with Geffrey Davis – PEN America

• Revising the Storm…and the Poems Inside: Interview with Geffrey Davis – National Public Radio