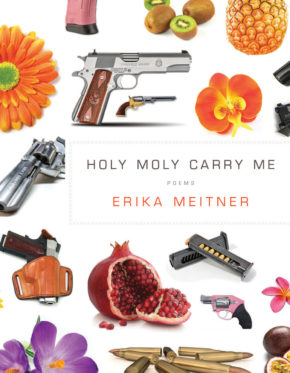 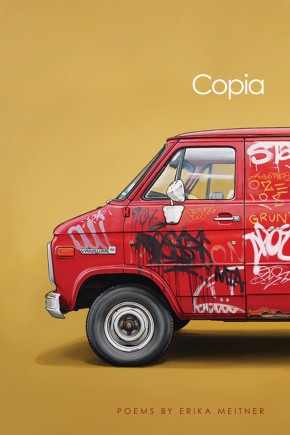 “Erika Meitner is the quintessential 21st century storyteller bearing witness from the vantage point of a social critic with heart, humor, and an incomparable voice.” ―Carmen Giménez Smith

“Erika Meitner is known for what’s called ‘documentary poetry,’ which combines some of the journalistic work of the reporter with the subjective renderings of the poet.” —NPR Books

“Erika Meitner…taps into national conversations on topics including motherhood, infertility, terrorism, Judaism, school shootings, the 2016 election, and race. The poems feel straightforward in a way that adds to their urgency. ” —Jewish Book Council

Poet and writer Erika Meitner is the author of five books of poems and winner of the 2018 National Jewish Book Award for Poetry. Born and raised in Queens and Long Island, NY, Meitner is a first-generation American: her father is from Haifa, Israel; her mother was born in a refugee camp in Stuttgart, Germany, which is where her maternal grandparents settled after surviving Auschwitz, Ravensbruck, and Mauthausen concentration camps. In a conversation with Rachel Zucker in Commonplace, Meitner explains that much of her work arises from a commitment to writing accurately and respectfully about the small town in which she lives, and the challenges of writing as an engaged member of her community while being an othered outsider, a poet, a Jew, and the white mother of a black son.

Her newest collection, Holy Moly Carry Me (BOA, 2018) transports readers into the heart of southern Appalachia—its highways and strip malls, its fragility and danger—as the speaker wrestles with racial tensions, religious identity, gun violence, raising children, and the anxieties of life in the 21st century. With a refusal to settle for easy answers, Meitner’s poems embrace life in an increasingly fractured society, and they never stop asking what it means to love our neighbor as ourselves. “In her graceful fifth collection, Meitner displays a sense of urgency informed by parenthood in this strange and particularly turbulent American moment. Hyper-aware of both suburban and rural landscapes, Meitner uncannily describes their features,” praises Publishers Weekly. While poet sam sax says, simply: “Holy Moly Carry Me is a triumph!”

Meitner’s first book, Inventory at the All-Night Drugstore (Anhinga Press, 2003), won the Robert Dana-Anhinga Prize for Poetry. Her second book, Ideal Cities (HarperCollins, 2010), was selected as a winner of the 2009 National Poetry Series competition. Her third collection, Makeshift Instructions for Vigilant Girls (2011) is “a sexy, funny, smart book full of crack-the-whip language’’, in the words of Beth Ann Fennelly. Meitner’s fourth collection of poems, Copia (2014), was published as part of BOA Editions’ American Poets Continuum Series. In a review of this collection, The Rumpus wrote: “When is it plenty? When is it enough? In Copia, Meitner gathers material from disparate places―big box stores, her grandmother, Yiddish speakers, her life in Blacksburg, VA, travel to Detroit―to consider these questions. The parts that she gathers, the fragments of language, the physical pieces of life, the things left behind, lost, abandoned are greater as a collection than any object individually. Things are more whole together, contained, bound. Meitner assembles plenitude only to ask, is plenty enough? That is the richness, the abundance of Copia.” Her sixth book of poems, Useful Junk, is forthcoming from BOA Editions in April 2022.

Her poetry and prose have been included in the anthologies Best American Poetry (2011), Starting Today: 100 Poems for Obama’s First 100 Days (2010), and Best African American Essays (2010), The Way We Work: Contemporary Writings from the American Workplace (2008), and Women Poets on Mentorship: Efforts and Affections (2008), as well as many journals, including The New York Times Magazine, The Southern Review, Slate, The Kenyon Review, Tin House, The New Republic, Ploughshares, and APR.

Meitner also creates larger-scale documentary photo/text projects on urban environments, including “This is Not a Requiem for Detroit” and “RNC CLE,” both commissioned by and published in Virginia Quarterly Review. She is currently working on a project on Miami and sea-level rise.

Meitner attended Dartmouth College, Hebrew University, and the University of Virginia, where she received her MFA in Creative Writing as a Henry Hoyns Fellow, and her MA in Religious Studies as a Morgenstern Fellow in Jewish Studies. Meitner was a US-UK Fulbright Distinguished Scholar in Creative Writing and the Diane Middlebrook Poetry Fellow at the University of Wisconsin Institute for Creative Writing and has received fellowships from The MacDowell Colony, the Virginia Center for Creative Arts, the Hermitage Artist Retreat, the Blue Mountain Center, and the Sewanee Writers’ Conference. She was also the recipient of the 2021 Poetry Society of America’s Cecil Hemley Memorial Award.

In addition to having taught creative writing at UVA, UW-Madison, and UC-Santa Cruz, Meitner has worked as a dating columnist, an office temp, a Hebrew school instructor, a computer programmer, a systems consultant, a lifeguard, a documentary film production assistant, and a middle school teacher in the New York City public school system.

Meitner is currently a Professor of English, and the Director of the MFA program in Creative Writing and the undergraduate Creative Writing Program at Virginia Tech. She lives in Blacksburg, Virginia.

Erika Meitner is the winner of the 2018 National Jewish Book Award for Poetry and author of six books of poems: Useful Junk; Holy Moly Carry Me; Inventory at the All-Night Drugstore; Makeshift Instructions for Vigilant Girls; and Ideal Cities, which was a 2009 National Poetry series winner; and Copia. Her poetry and prose have been widely anthologized. Born and raised in Queens and Long Island, NY, Meitner is a first-generation American: her father is from Israel; her mother was born in a refugee camp in Germany, which is where her maternal grandparents settled after surviving the Holocaust. Meitner is currently a professor of English at Virginia Tech, where she directs the MFA and undergraduate programs in Creative Writing.

“In the stunning, exact, and haunting book Holy Moly Carry Me, Meitner’s strong signature voice is on full display, but with a complex empathy for the violent, messed-up world. These are powerful poems that wonder, ache, fear, question, delve into history, and somehow never stop praising the human capacity for survival.” —Ada Limón

Erika Meitner’s fifth collection of poetry plumbs human resilience and grit in the face of disaster, loss, and uncertainty. These narrative poems take readers into the heart of southern Appalachia—its highways and strip malls and gun culture, its fragility and danger—as the speaker wrestles with what it means to be the only Jewish family in an Evangelical neighborhood and the anxieties of raising one white son and one black son amidst racial tensions and school lockdown drills. With a firm hand on the pulse of uncertainty at the heart of 21st century America and a refusal to settle for easy answers, Meitner’s poems embrace life in an increasingly fractured society and never stop asking what it means to love our neighbor as ourselves.

COPIA (2014)
Erika Meitner’s fourth collection grapples with the widespread implications of commercialism and overconsumption, particularly in exurban America. Documentary poems examine the now-bankrupt city of Detroit, once the thriving heart of the American Dream. Probing the human desires for love, sex, objects, and home, Copia exposes a vacuous world of decay and abandonment, while holding out hope for re-birth from the ashes.

Because it is an uninhabited place, because it
makes me hollow, I pried open the pages of
Detroit: the houses blanked out, factories
absorbed back into ghetto palms and scrub-
oak, piles of tires, heaps of cement block.
Vines knock and enter through shattered
drop-ceilings, glassless windows. Ragwort
cracks the street’s asphalt to unsolvable
puzzles.

MAKESHIFT INSTRUCTIONS FOR VIGILANT GIRLS (2011)
“These cool, hot poems about women and girls in danger and on the prowl, coming of age and being of age, are full ofstartling detail and vivid setting. Meitner’s range, wit, compassion and her alertness to the moments where domestic and collective experience intersect, make these poems memorable. This book is a seriously good read.” —Daisy Fried

Exploring themes of pregnancy, motherhood, ancestry, and life in the borderline slums of Washington, DC, the richly felt and adroit poetry of Erika Meitner’s Ideal Cities moves, mesmerizes, and delights. The work of an important emerging voice in contemporary American poetry—a winner of the 2009 National Poetry Series Prize as selected by Paul Guest. Denise Duhamel writes, “The poems in Erika Meitner’s Ideal Cities are road maps, blueprints, dollhouses, dioramas…..Meitner’s poetry isn’t afraid of history and personal histories. Her voice is smart, sassy, and savvy. Her ideal poems are built with mortar and quirkily astounding metaphors.”

INVENTORY AT THE ALL-NIGHT DRUGSTORE (2003)
“In Erika Meitner’s Inventory at the All-Night Drugstore, we enter worlds marvelously realized, our intrepid narrator an unerring guide. Whether we navigate the initiatory mysteries and indignities of adolescent urgencies, the perils and pleasures of the adult sexual quest, or the vital chaos of teaching in a Brooklyn public school, we are in the care of a poet who cares: feisty, funny, and ever alert to the telling details of a life lived in the rush and anguish of the post-modern world. These are poems like the tattoos she hymns and ponders—they mark our being with their delicate, indelible patterns, their swoops and utterances and wild surmises.”- Gregory Orr

• Read the photo essay: “This is Not a Requiem for Detroit” – VCR

I’ll Remember You As You Were, Not As What You’ll Become

If you are fearful, America,
I can tell you I am too. I worry
about my body—the way, lately,
it marches itself over curbs and
barriers, lingers in the streets
as a form of resistance.

The streets belong to no one
and everyone and are a guide
for motion, but we are so numerous
there is no pavement left on which to
release our bodies, like a river spilling
over a dam, so instead my body
thrums next to yours in place.

When we stop traffic or hold
hands to form a human chain,
we become a neon OPEN sign
singing into the night miles from
home when the only home left
is memory, your body, my body,
our scars, the dark punctuated
with the dying light of stars.

*note: the title comes from the work of video artist Sky Hopinka

Garden of rock.
Garden of brick and heather.
Garden of cranes with their hands raised
as if they know the yellow answer:
to gather together—safety in numbers.
Garden of drywall frames, holes for windows
punched out like teeth. Garden of bar fights.
Garden of rubble and gaps,
spectral for-sale signs knocked
from wooden posts, bleached down
to numbers ending in gardens of overgrown lots.
We are falling into ruin, garden
of scaffolding and shale and gravel—
give us back our peace: a half-built garden
of theft, treasures hidden in darkness,
newspapers crumpled on subfloors telling us
to hold fast to that which is good.
Garden of rebar and saplings with trunks
encased in corrugated piping
because many animals can girdle
a tree’s bark quickly: deer, stray cats, rabbits.
Garden of Tyvek wrap loosed
and flapping like a ship’s sail
in the gales, in the sheeting storms.
Hanging laundry left out in the garden
past darkness, fruit from the tree
of human-ness: socks, shirts, underpants.
Garden of long exposures, half-light, traces
that empty themselves in tire treads running
like ladders through red clay mud:
the dirt from which we are formed
and crushed and formed again.

• A Jewish Reading of Holy Moly Carry Me — The Bind

• Review of Copia — The Rumpus
Listen to Audio