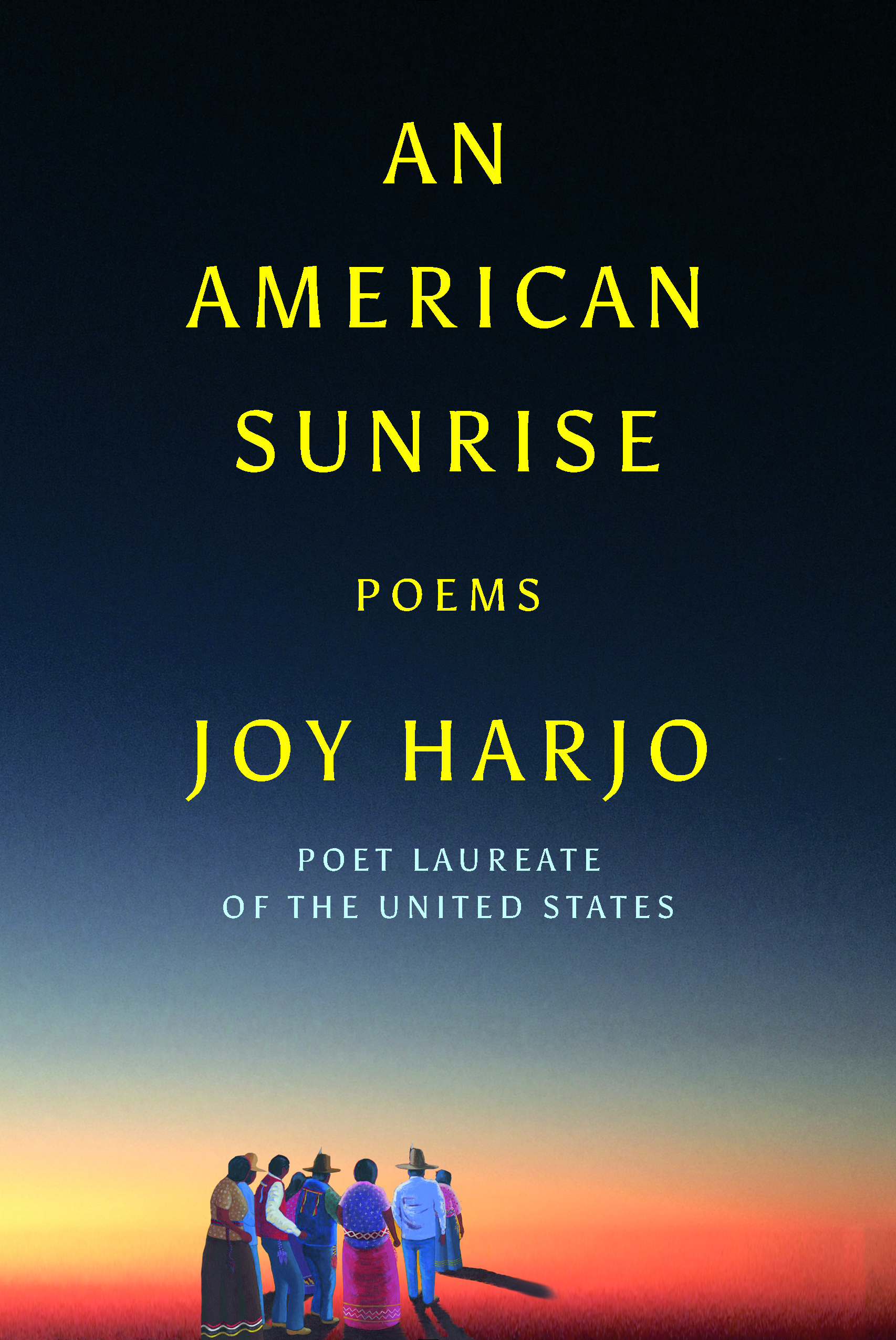 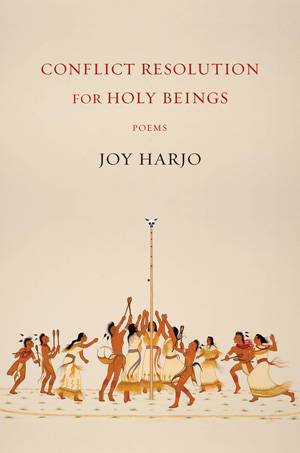 “I turn and return to Harjo’s poetry for her breathtaking complex witness and for her world-remaking language.” —Adrienne Rich

“Defining the poet’s role as a ‘journey for truth, for justice,’ Harjo explores the role of the artist in society, the quest for love, the links among the arts, what constitutes family, and what it means to be human.” —Library Journal

“Harjo’s poetry is celebrated for its insightful attention to the spiritual and natural worlds. In lines that can be deceptively simple or strikingly complex, she often explores the persistence of myth in contemporary experience.” —The Washington Post

In 2019, Joy Harjo was appointed the 23rd United States Poet Laureate, the first Native American to hold the position. Born in Tulsa, Oklahoma, Harjo is an internationally known award-winning poet, writer, performer, and saxophone player of the Mvskoke/Creek Nation. Grammy award winning saxophonist Paul Winter says, “Joy Harjo is a poet of music just as she is a poet of words.” She is the author of nine books of poetry and a memoir.

The Judges Citation of the Jackson Prize declares, “Harjo’s work speaks not only to the world we live in, but to the unseen world that moves through us, the thread that has connected us all from the start…. Harjo’s poems embody a rich physicality and movement; they begin in the ear and the eye, they go on to live and hum inside the body…. Throughout her luminous and substantial body of work, there is a sense of timelessness, of ongoingness, of history repeating; these are poems that hold us up to the truth and insist we pay attention.”

And on behalf of the judges of the Wallace Stevens Award, Alicia Ostriker said: “Throughout her extraordinary career as poet, storyteller, musician, memoirist, playwright and activist, Joy Harjo has worked to expand our American language, culture, and soul.”

Harjo’s poetry collections include An American Sunrise (W.W. Norton, 2019); Conflict Resolution for Holy Beings (2015)—shortlisted for the 2016 Griffin Poetry Prize and added to ALA’s 2016 Notable Books List, this book is hailed by Yusef Komunyakaa as “a marvelous instrument that veins through a dark lode of American history.“; How We Became Human: New and Selected Poems; and She Had Some Horses.

Her memoir Crazy Brave (W.W. Norton, 2012) won several awards including the PEN USA Literary Award for Creative Non-Fiction and the American Book Award. It was called “The best kind of memoir, an unself-conscious mix of autobiography, spiritual rumination, cultural evaluation, history and political analysis told in simple but authoritative and deeply poetic prose” by Ms Magazine. Harjo is currently working on her next memoir, and she has a commission from the Public Theater of NY to write We Were There When Jazz Was Invented—a musical play that will restore southeastern natives to the American story of blues and jazz.

Soul Talk, Song Language (2011, Wesleyan) is a collection of Harjo’s essays and interviews. She co-edited an anthology of contemporary Native women’s writing: Reinventing the Enemy’s Language: Native Women’s Writing of North America, one of the London Observer’s Best Books of 1997. She wrote the award-winning children’s book The Good Luck Cat (Harcourt), and in 2009 she published a young adult, coming-of-age-book, For A Girl Becoming, which won a Moonbeam Award and a Silver Medal from the Independent Publishers Awards.

A renowned musician, Harjo performs with her saxophone nationally and internationally, solo and with her band, The Arrow Dynamics. She has five CDs of music and poetry including her most recent award-winning album of traditional flute, Red Dreams, A Trail Beyond Tears and Winding Through the Milky Way, which won a Native American Music Award (NAMMY) for Best Female Artist of the Year in 2009. She also performs her one-woman show, “Wings of Night Sky, Wings of Morning Light,” which premiered at the Wells Fargo Theater in Los Angeles in 2009 with other performances at the Public Theater in NYC and LaJolla Playhouse as part of the Native Voices at the Autry.

Harjo is the recipient of a Guggenheim Fellowship, the New Mexico Governor’s Award for Excellence in the Arts, the Rasmuson United States Artist Fellowship. In 2014 she was inducted into the Oklahoma Writers Hall of Fame.

Joy Harjo’s nine books of poetry include An American Sunrise, Conflict Resolution for Holy Beings, How We Became Human: New and Selected Poems, and She Had Some Horses. Harjo’s memoir Crazy Brave won several awards, including the PEN USA Literary Award for Creative Non-Fiction and the American Book Award. She is the recipient of the Ruth Lilly Prize from the Poetry Foundation for Lifetime Achievement, the 2015 Wallace Stevens Award from the Academy of American Poets for proven mastery in the art of poetry, a Guggenheim Fellowship, the William Carlos Williams Award from the Poetry Society of America, and the United States Artist Fellowship. In 2014 she was inducted into the Oklahoma Writers Hall of Fame. A renowned musician, Harjo performs with her saxophone nationally and internationally, solo and with her band, the Arrow Dynamics. She has five award-winning CDs of music including the award-winning album Red Dreams, A Trail Beyond Tears and Winding Through the Milky Way, which won a Native American Music Award for Best Female Artist of the Year in 2009. Harjo’s latest is a book of poetry from Norton, An American Sunrise. She lives in Tulsa, Oklahoma.

AN AMERICAN SUNRISE (Poetry, 2019)
In this powerful and stirring collection, Joy Harjo reflects on moving to her tribe’s original lands for the first time, on the blessings and difficulties of remembering and re-experiencing her tribe’s forced removal, and on being innately and irrevocably connected to her ancestors. From the memory of her mother’s death to her beginnings in the Native rights movement, Harjo’s intimate life intertwines with tribal history in poems that sing of beauty and survival.

“A marvelous instrument that veins through a dark lode of American history. The poet’s finely tuned voice goes where ‘Midnight is a horn player,’ driven by tribute, prayer, and blues, excavating names, places, and dreams. And at the end of this epic voyage the reader surfaces at sunrise.” —Yusef Komunyakaa

In these poems, the joys and struggles of the everyday are played against the grinding politics of being human. Beginning in a hotel room in the dark of a distant city, we travel through history and follow the memory of the Trail of Tears from the bend in the Tallapoosa River to a place near the Arkansas River. Stomp dance songs, blues, and jazz ballads echo throughout. Lost ancestors are recalled. Resilient songs are born, even as they grieve the loss of their country. Called a “magician and a master” by the San Francisco Chronicle, Joy Harjo is at the top of her form in Conflict Resolution for Holy Beings.

“A spiritual coming-of-age memoir from a poet praised for her ‘breathtaking complex witness and world-remaking language.'” —Adrienne Rich

In this transcendent memoir, grounded in tribal myth and ancestry, music and poetry, Joy Harjo, one of our leading Native American voices, details her journey to becoming a poet. Born in Oklahoma, the end place of the Trail of Tears, Harjo grew up learning to dodge an abusive stepfather by finding shelter in her imagination, a deep spiritual life, and connection with the natural world. She attended an Indian arts boarding school, where she nourished an appreciation for painting, music, and poetry; gave birth while still a teenager; and struggled on her own as a single mother, eventually finding her poetic voice. Narrating the complexities of betrayal and love, Crazy Brave is a memoir about family and the breaking apart necessary in finding a voice. Harjo’s tale of a hardscrabble youth, young adulthood, and transformation into an award-winning poet and musician is haunting, unique, and visionary.

“In Soul Talk Joy Harjo provides a rare and treasurable acoustic: the sound of an artist and woman thinking for herself, and for us. Never afraid of large questions of purpose and identity. But never remiss either in providing beautiful, small details of craft and commitment. This is an essential book.” —Eavan Boland

Joy Harjo is a “poet-healer-philosopher-saxophonist,” and one of the most powerful Native American voices of her generation. She has spent the past two decades exploring her place in poetry, music, dance/performance, and art. Soul Talk, Soul Language gathers together in one complete collection many of these explorations and conversations. Through an eclectic assortment of media, including personal essays, interviews, and newspaper columns, Harjo reflects upon the nuances and development of her art, the importance of her origins, and the arduous reconstructions of the tribal past, as well as the dramatic confrontation between Native American and Anglo civilizations. Harjo takes us on a journey into her identity as a woman and an artist, poised between poetry and music, encompassing tribal heritage and reassessments and comparisons with the American cultural patrimony. She presents herself in an exquisitely literary context that is rooted in ritual and ceremony and veers over the edge where language becomes music.

“She Had Some Horses is a literary event of importance. The poetry here is of mythic and timeless character, native and lyrical in its expression, profound in its reflection of a worldview that is at once precise and comprehensive. There is much of the oral tradition here, much that is worthy of our closest attention and deepest respect.” —N. Scott Momaday

First published in 1983 and now considered a classic, She Had Some Horses is a powerful exploration of womanhood’s most intimate moments. Joy Harjo’s poems speak of women’s despair, of their imprisonment and ruin at the hands of men and society, but also of their awakenings, power, and love.

Once I was so small I could barely see over the top of the back seat of the black Cadillac my father bought with his Indian oil money. He polished and tuned his car daily. I wanted to see everything.

This was around the time I acquired language, when something happened that changed my relationship to the spin of the world. It changed even the way I looked at the sun.

…My rite of passage into the world of humanity occurred then, through jazz. The music was a startling bridge between familiar and strange lands. I heard stomp-dance shells, singing. I saw suits, satin, fine hats. I heard workers singing in the fields. It was a way to speak beyond the confines of ordinary language.

I still hear it.

The world begins at a kitchen table. No matter what,
we must eat to live.
The gifts of earth are brought and prepared, set on the
table so it has been since creation, and it will go on.
We chase chickens or dogs away from it. Babies teethe
at the corners. They scrape their knees under it.
It is here that children are given instructions on what
it means to be human. We make men at it,
we make women.
At this table we gossip, recall enemies and the ghosts
of lovers.
Our dreams drink coffee with us as they put their arms
around our children. They laugh with us at our poor
falling-down selves and as we put ourselves back
together once again at the table.
This table has been a house in the rain, an umbrella
in the sun.
Wars have begun and ended at this table. It is a place
to hide in the shadow of terror. A place to celebrate
the terrible victory.
We have given birth on this table, and have prepared
our parents for burial here.
At this table we sing with joy, with sorrow.
We pray of suffering and remorse.
We give thanks.
Perhaps the world will end at the kitchen table,
while we are laughing and crying,
eating of the last sweet bite.

—from The Woman Who Fell From the Sky

• Interview with Joy Harjo — The Rumpus

• “Having to Fight for It”: An Interview with Joy Harjo — Sampsonia Way

• ‘We were there’: Joy Harjo on the forgotten origins of jazz  —MPR News

• Joy Harjo Reads “She Had Some Horses” — Poems Out Loud