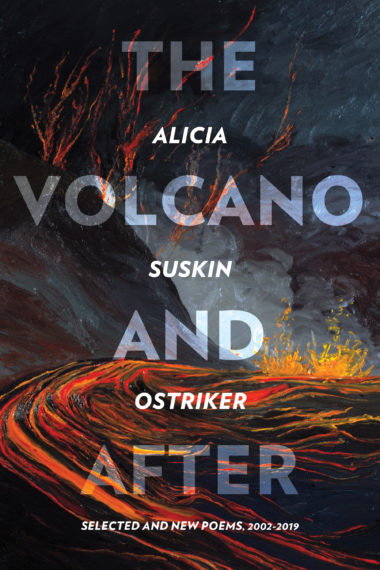 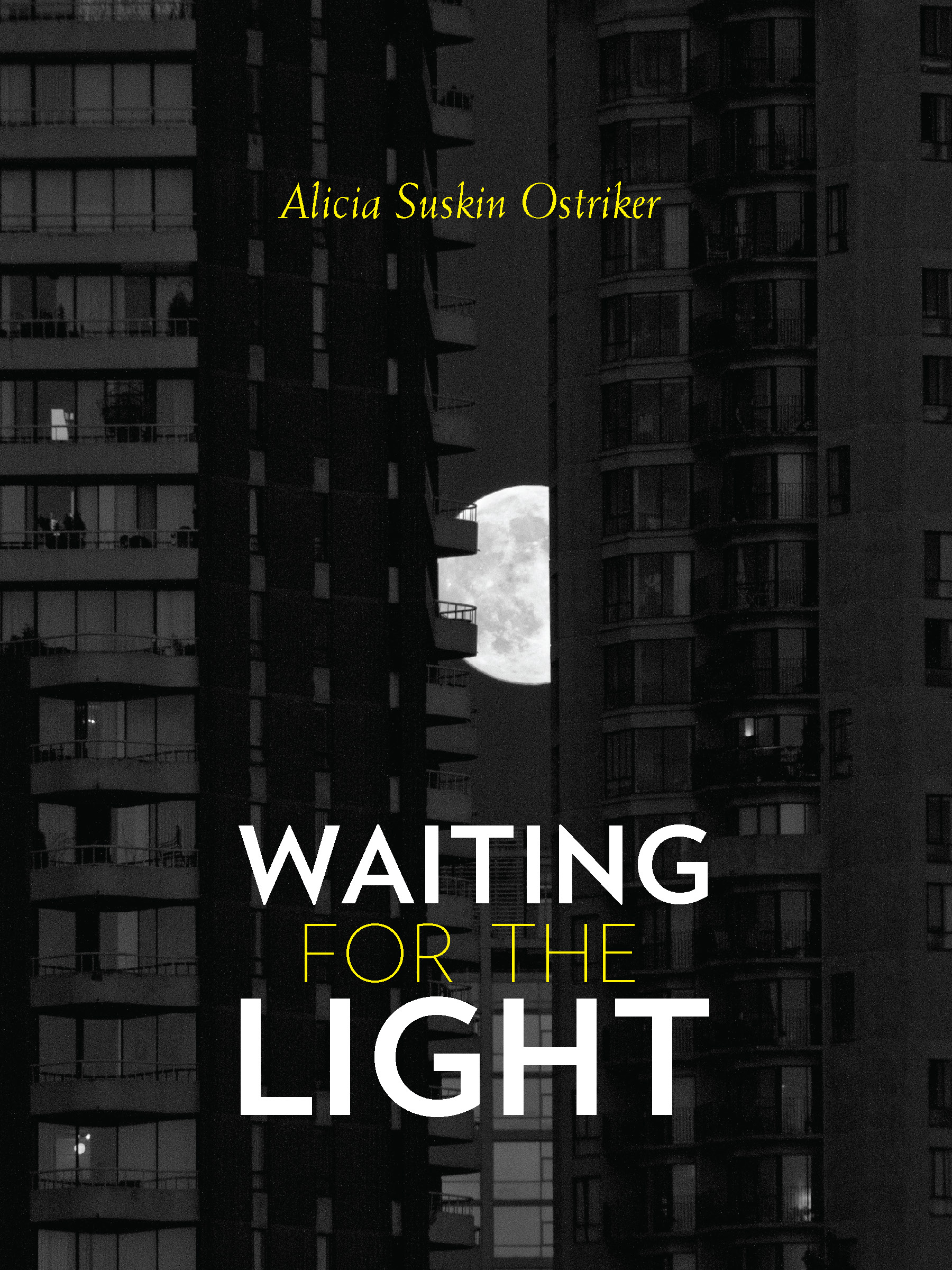 “Alicia Ostriker has become one of those brilliantly provocative and imaginatively gifted contemporaries whose iconoclastic expression, whether in prose or poetry, is essential to understanding our American selves.” —Joyce Carol Oates

“Ostriker leaps into her subjects with bristling intelligence, fierce humanity, and wit.” —Poetry

Alicia Ostriker, a poet and critic, has published seventeen volumes of poetry, including The Volcano and After (2020), Waiting for the Light (2017), which received the National Jewish Book Award, The Book of Seventy, which received that award in 2009, The Old Woman, the Tulip, and the Dog (2014), The Book of Life: Selected Jewish Poems 1979-2011; and No Heaven (2005). Her 1980 feminist classic and anti-war poem sequence, The Mother/Child Papers, was recently reprinted by the University of Pittsburgh Press. The Volcano Sequence, a volume of spiritual quest and questioning, wrestles with Jewish traditions. Twice a National Book Award Finalist, for The Little Space (1998) and The Crack in Everything (1996), and winner of the William Carlos Williams Award for The Imaginary Lover, Ostriker is known for her intelligence and passionate appraisal of women’s place in literature, and for investigating themes of family and sexuality, politics, religion, Jewish identity, and celebration of city life. Ostriker’s poetry is at once moving and new, because it touches old and deep knowledge, and also opens the heart and mind again. Or, as Joan Larkin puts it, “In a voice absolutely her own—wild, earthy, irreverent, full of humor and surprise—Ostriker takes on nothing less than what it feels like to be alive.”

Ostriker’s critical work includes the now-classic Stealing the Language: the Emergence of Women’s Poetry in America, and other books on American poetry from Walt Whitman to the present. She is also the author of critical books on the Bible, including the controversial The Nakedness of the Fathers: Biblical Visions and Revisions, a combination of midrash and autobiography. Her newest prose work is For The Love of God: the Bible as an Open Book, of which Elaine Pagels writes, “No one who reads this amazing, brilliantly written book will ever read the Bible the same way again.”

Her poetry has appeared in The New Yorker, American Poetry Review, The Atlantic, Paris Review, Yale Review, Ontario Review, The Nation, The New Republic, Best American Poetry, The Pushcart Anthology, and many other journals and anthologies, and has been translated into numerous languages including Hebrew and Arabic. Ostriker has performed her work widely in the USA, and has performed, lectured, and led workshops in England, France, Italy, Israel, Japan, and China. In 2015, Ostriker was appointed a Chancellor of the Academy of American Poets. In 2018, Everywoman Her Own Theology, a volume of essays on Ostriker’s poetry, is forthcoming from the University of Michigan Press.

Ostriker lives in New York City, is Professor Emerita of English at Rutgers University, and teaches in the low-residency Poetry MFA program of Drew University. She says, “If I did not have teaching to do, I would not recognize myself.”

Alicia Ostriker has published seventeen volumes of poetry, including The Volcano and After; Waiting for the Light; The Old Woman, the Tulip, and the Dog; The Book of Life: Selected Jewish Poems 1979-2011; No Heaven; The Volcano Sequence; and The Imaginary Lover, winner of the William Carlos Williams Award. She was twice a National Book Award Finalist, for The Little Space (1998) and The Crack in Everything (1996), and twice a National Jewish Book Award winner. Her poetry has appeared in The New Yorker, American Poetry Review, The Atlantic, Paris Review, Yale Review, Ontario Review, The Nation, The New Republic, Best American Poetry, The Pushcart Anthology, and many other journals and anthologies, and has been translated into numerous languages including Hebrew and Arabic. Ostriker’s critical work includes the now-classic Stealing the Language: the Emergence of Women’s Poetry in America, and other books on American poetry and on the Bible.

THE VOLCANO AND AFTER (Poetry, 2020)
Alicia Suskin Ostriker’s passionate voice has long been acknowledged as a vital force in American poetry. From urgent spiritual quest to biting political satire, from elegy to comedy, from celebration of the city street and the world “as a paradise might be / if we had eyes to see,” to the “crack in earth . . . crack in her mind,” from brilliant evocations of art and music to mother-daughter wrestlings, Ostriker’s poetry rings with insistence on beauty and truth. Drawing from six of her previous books, and highlighting a sequence of bold new poems exploring the challenges and absurdities of aging, The Volcano and After is a masterpiece for our time.

WAITING FOR THE LIGHT (Poetry, 2017)
What is it like living today in the chaos of a city that is at once brutal and beautiful, heir to immigrant ancestors “who supposed their children’s children would be rich and free?” What is it to live in the chaos of a world driven by “intolerable, unquenchable human desire?” How do we cope with all the wars? In the midst of the dark matter and dark energy of the universe, do we know what train we’re on? In this cornucopia of a book, Ostriker finds herself immersed in phenomena ranging from a first snowfall in New York City to the Tibetan diaspora, asking questions that have no reply, writing poems in which “the arrow may be blown off course by storm and returned by miracle.”

“The informal mastery of these poems is marvelous. Ostriker has devised a style that is offhand-seeming, a voice that is effortlessly concise, and a subject matter that has leapt far past the personal. Bawdy, ruthless, insightful, and compassionate, these poems feel like play, even as they take you through configuration after configuration of the mortal condition. Reading them, I feel like I’m encountering poetry translated from Eastern Europe, or written by some unknown brilliance in Argentina. Everyone should read them; they’re beautiful, and universal.” —Tony Hoagland

This book by a major American poet is a sequence of poems that will surprise and delight readers—in the voices of an old woman full of memories, a glamorous tulip, and an earthy dog who always has the last word. The Coal Hill Review writes, “These three characters weave a multicolored tapestry of memory, philosophy, and desire to remind us that our perceptions of life are what define experience.”

THE BOOK OF LIFE: SELECTED JEWISH POEMS 1979-2011 (Poetry, 2012)
Ostriker’s latest book gathers poems from over three decades that explore different facets of Jewish history, passion, and Ostriker’s own experience as a female Jewish poet. She prefaces the collection with an introduction that reads as both a meditation on the work and a generous invitation to the reader: “I ponder the Shoah as an illustration of how sick and sickening human beings can become, but also as a window onto acts of extraordinary heroism and empathy.” This contradiction is part of what makes The Book of Life so compelling—beauty and struggle are so often intertwined. The poems in this volume illuminate lived experience, as Ilya Kaminsky writes, “with gusto, with passion, with clarity, with eros, with grief. If there is God, it is the mourner’s or the mystic’s God. If there is faith, it is the faith in our future. This is gorgeous poetry, as Jewish as it universal.”

THE BOOK OF SEVENTY (Poetry, 2009)
Alicia Ostriker seizes the opportunity to take us where too few poets have been able to take us: into a domain of what our fabulists like to call the “golden years.” As we live longer, we become inevitably curious about the actual texture of these late years, curious about what happens in the soul. Out of that curiosity is a new kind of poetry born, an elder-style that has passion and irony, wisdom, folly, clarity and tenderness. In her keen engagement with the self and the world, Ostriker offers us a voice and a perspective that explore the territory of seventy and beyond.

FOR THE LOVE OF GOD: THE BIBLE AS AN OPEN BOOK (Prose, 2007)
Quoting King Solomon’s famous prayer to God at the Temple in Jerusalem, “Behold, the heaven of heavens cannot contain thee; how much less this house that I have builded,” Alicia Suskin Ostriker posits a God who cannot be contained by dogma and doctrine. Troubled by the way the Bible has become identified in our culture with a monolithic authoritarianism, Ostriker focuses instead on the extraordinary variability of Biblical writing. For the Love of God is a provocative and inspiring re-interpretation of six essential Biblical texts: The Song of Songs, the Book of Ruth, Psalms, Ecclesiastes, Jonah, and Job.  In prose that is personal and probing, analytically acute and compellingly readable, Ostriker sees these writings as “counter-texts,” deviating from convention yet deepening and enriching the Bible, our images of God, and our own potential spiritual lives. Attempting to understand “some of the wildest, strangest, most splendid writing in Western tradition,” she shows how the Bible embraces sexuality and skepticism, boundary crossing and challenges to authority, how it illuminates the human psyche and mirrors our own violent times, and how it asks us to make difficult choices in the quest for justice. For better or worse, our society is wedded to the Bible.  But according to Talmud, “There is always another interpretation.” Ostriker demonstrates that the Bible, unlike its reputation, offers a plenitude of surprises.

—from The Old Woman, The Tulip, and the Dog

It used to be
I would fall to the floor and press my forehead to it
in moments of despair
I would say help me
help me
but listen
I am ok
though I just now found myself pressing my forehead
to the carpet of my stairs
about the waters in the flooded cities
poisoned by oil spills, chemicals, the dead
about the survivors forever traumatized
dear god
I am alive I am alive
help them

THEY SPEAK OF RACE

• Alicia Ostriker on Her Poem “Daffodils” — How A Poem Happens

• Review of The Old Woman, the Tulip, and the Dog — Jewish Book Council

• Review of The Old Woman, the Tulip, and the Dog — Coal Hill

• “My Dead Friend” with Commentary from Ostriker — Prairie Schooner