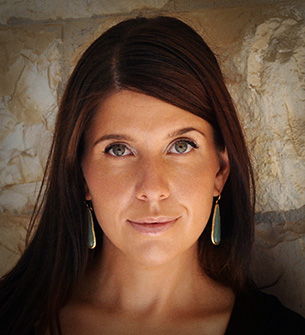 “It’s clear we’re in the hands of a master storyteller.” —Jesmyn Ward

“Not since Robert Stone has a writer so examined the nature of disillusionment and the ways in which newfound hope can crack the cement of failed dreams.” —Adam Johnson

“Antopol has an uncanny ability to get under her characters’ skins in the most intimate possible ways.” —Peter Orner

Molly Antopol is a recent Wallace Stegner Fellow and current Jones Lecturer at Stanford University. She’s a recipient of the 5 Under 35 award from the National Book Foundation. Her debut story collection, The UnAmericans, was published by W.W. Norton in February 2014, and won the New York Public Library’s Young Lions Fiction Award. The book was longlisted for the National Book Award in fiction and was a finalist for the PEN Robert W. Bingham Prize for Debut Fiction, the Barnes & Noble Discover Award, the National Jewish Book Award, and the California Book Award, among others. One story from the collection, “My Grandmother Tells Me This Story,” won The O. Henry Prize for best short fiction of the year.

About The UnAmericans, The New York Times writes, “It’s one of the achievements of Antopol’s stories that her men and women seem to be questioning everything, all the time. Political awareness is a birthright for Antopol’s characters.” The book is an Indies Introduce Debut Authors and Indie Next pick. “[The UnAmericans] isn’t simply powerful and important,” writes novelist Jesmyn Ward says that, “it’s necessary.”

Chosen by Meg Wolizter as an NPR Best Book of 2014, Wolitzer praises The UnAmericans saying: “These stories reminded me of another era in short fiction, a time when Bernard Malamud and Isaac Bashevis Singer and Grace Paley were writing. The settings include Tel Aviv, Prague and Ukraine, and the characters are sometimes Israeli or Russian. Molly Antopol’s decision to spread out geographically allows her a way to take stock of the delicate connections between people in and out of couples and families. Sometimes the stories resemble miniature novels, rich and eventful and populated, and Antopol has an appealing, surprising tendency to keep going past the spot where you thought she was going to wrap the whole thing up.”

Antopol received her M.F.A. from Columbia University, and her writing has appeared or is forthcoming on NPR’s This American Life, online at The New Yorker, and in One Story, Ecotone, The Oxford American, American Short Fiction, Mississippi Review Prize Stories, The Wall Street Journal, San Francisco Chronicle, The Rumpus and elsewhere. She is also a writer-in-residence at the Summer Literary Seminars in Lithuania. Recently, she has been the 2019 visiting fellow at the American Library in Paris. In 2017 she was the recipient the Berlin Prize at the American Academy in Berlin. And in 2016 she received the Radcliffe Institute Fellowship at Harvard University.

She lives in San Francisco, and is at work on a novel, The After Party, which will also be published by Norton.

Molly Antopol’s debut story collection, The UnAmericans, won the New York Public Library’s Young Lions Fiction Award and was a National Book Foundation 5 Under 35 honoree. The book was longlisted for the National Book Award and a finalist the PEN/Robert W. Bingham Prize for Debut Fiction, the Barnes & Noble Discover Award, the National Jewish Book Award and the California Book Award, among others. She’s the recipient of a Radcliffe Institute Fellowship at Harvard and a Stegner Fellowship at Stanford, where she currently teaches. She lives in San Francisco, and is at work on a novel, The After Party, which will also be published by Norton.

“The UnAmericans is that rare thing, an exceptional collection of wide-ranging, powerful and nuanced stories. Antopol has an uncanny ability to get under her characters’ skins in the most intimate possible ways. You come away from these stories with an ache in your soul for all her people and what they were up against, how they triumphed, how they failed, and how they managed, somehow, to endure.” —Peter Orner

An absentee father, a former dissident from communist-era Prague, needles his adult daughter for details about her newly commissioned play when he fears it will cast him in an unflattering light. An actor, imprisoned during the Red Scare for playing up his communist leanings to get a part with a leftist film director, is shamed by his act when he reunites with his precocious young son. An Israeli soldier, forced to defend a settlement filled with American religious families, still pines for a chance to discover the United States for himself. A young Israeli journalist, left unemployed after America’s most recent economic crash, questions her life path when she begins dating a middle-aged widower still in mourning for his wife. And in the book’s final story, a tour de force spanning three continents and three generations of women, a young American and her Israeli husband are forced to reconsider their marriage after the death of her dissident art-collecting grandmother. Again and again, Molly Antopol’s deeply sympathetic characters struggle for footing in an uncertain world, hounded by forces beyond their control. Their voices are intimate and powerful and they resonate with searing beauty. Antopol is a superb young talent, and The UnAmericans will long be remembered for its wit, humanity, and heart.

• Interview with Molly Antopol — The Rumpus

• Interview with Molly Antopol — The Millions

• Review of The UnAmericans — NPR’s All Things Considered


“The Old World” (excerpt from story)

No one wants to listen to a man lament his solitary nights-myself included. Which is why, on an early fall morning four months after Gail left, when a woman breezed into my shop with a pinstriped skirt in her arms and said, “On what day this can be ready?” I didn’t write a receipt, tell her Tuesday and move on to the next customer. Instead I said, “Your accent. Russian?”

“The Jewel of the Baltic! I’ve read a lot about it,” I said. “The art, the food, those ancient fishing villages!” On and on I went -though I had not, in fact, read about it. I had, however, caught a television special once, but I remembered little more than twisted spires, dreary accordions, plates of pink fish, pocked and shiny.

“Ukraine,” she said slowly, “is not on the Baltic.” She had a wide pale face, full lips and short blond hair dyed the color of curry.