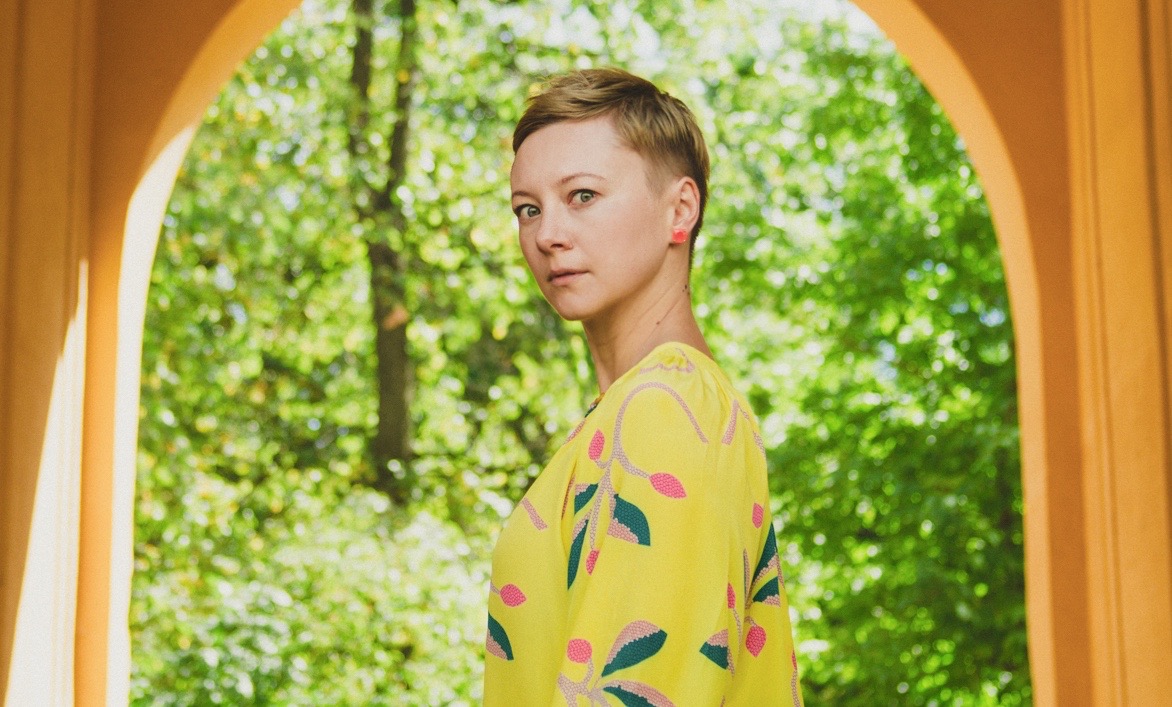 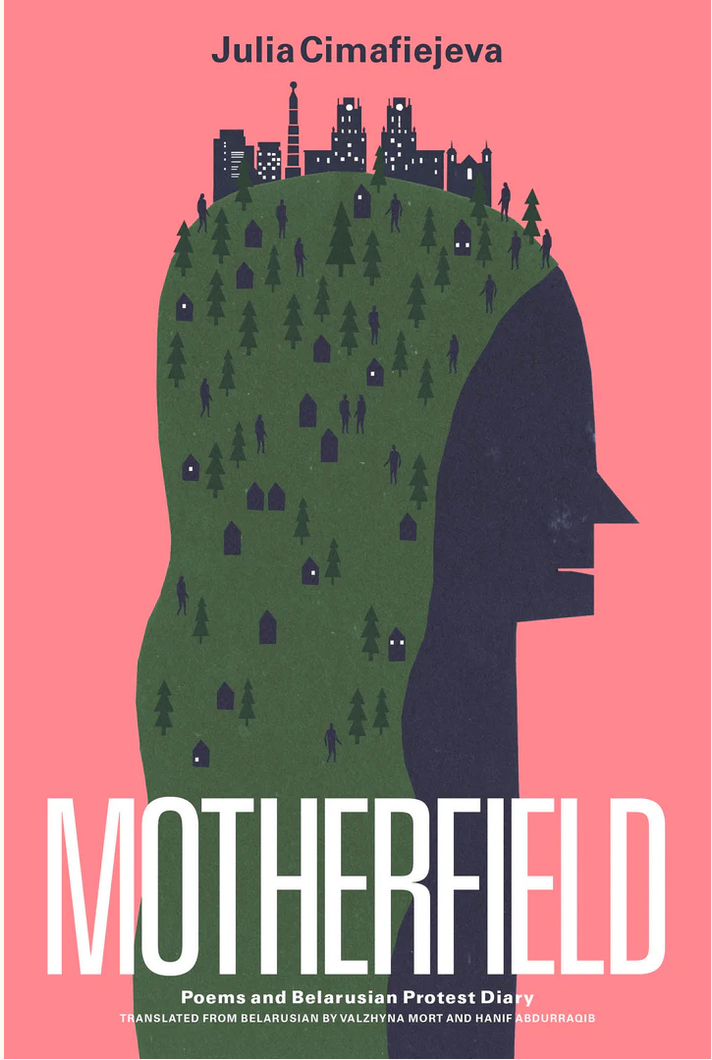 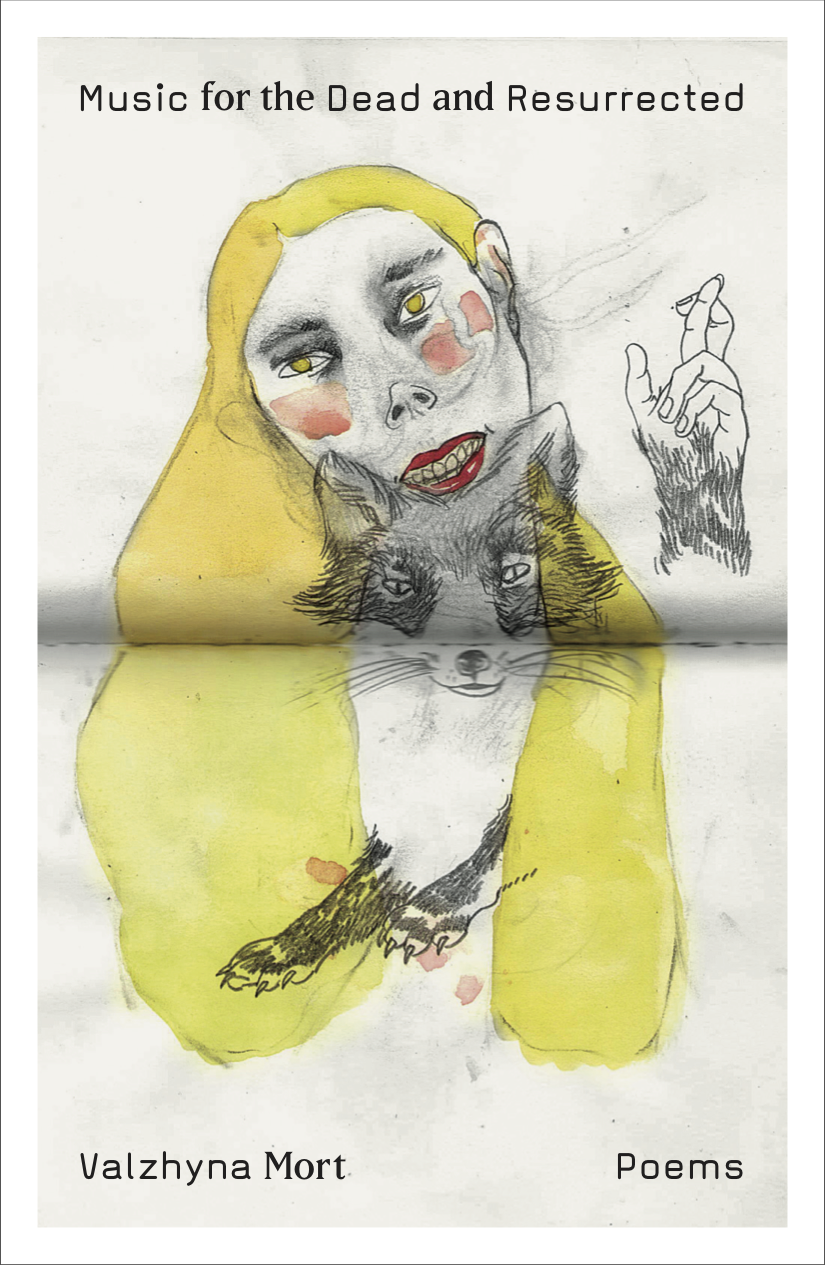 “Mort is most characterized by an obstinate resistance and rebellion against the devaluation of life. One of the best young poets in the world today.” —World Literature Today

“Through her tightly constructed and original language, and her inspired recreation of familiar mythology, Mort attempts to resist the scourge of forgetting and to achieve immortality for her characters as well as for herself.” —The California Journal of Poetics

Valzhyna Mort, born in Minsk, Belarus, made her American debut in 2008 with the poetry collection Factory of Tears (Copper Canyon Press), co-translated by the husband-and-wife team of Elizabeth Oehlkers Wright and Pulitzer Prize-winning poet Franz Wright. She is also the author of Collected Body (Copper Canyon Press, 2012) and Music for the Dead and Resurrected (FSG, 2020). Most recently, Mort co-translated Julia Cimafiejeva’s Motherfield (Deep Vellum, 2022) alongside Hanif Abdurraqib.

Mort received the Crystal of Vilenica Award in Slovenia in 2005 and the Burda Poetry Prize in Germany in 2008. In 2010, she received the Lannan Foundation Literary Fellowship and the Bess Hokin Prize from Poetry magazine. Her poems have appeared in Best American Poetry 2014, New European Poets, and The Ecco Anthology of International Poetry, as well as such literary magazines as The Common, Guernica, New Letters, Poetry, Poetry International, VQR and others.

There is an urgency and vitality to Mort’s poems; the narrative moves within universal themes—lust, loneliness, the strangeness of god and familial love—while many poems question what language is and challenge the authority that delegates who has the right to speak and how. The New Yorker writes, “Mort strives to be an envoy for her native country, writing with almost alarming vociferousness about the struggle to establish a clear identity for Belarus and its language.” Library Journal described Mort’s vision as “visceral, wistful, bittersweet, and dark.”

Mort is the editor of Something Indecent: Poems Recommended by Eastern European Poets (Red Hen Press, 2013), a poetic anthology that offers a conversation about how Eastern European poets view themselves, their contemporaries, their century, and the place of their region in the millennia. Together with Ilya Kaminsky and Katie Farris, Valzhyna Mort has edited Gossip and Metaphysics: Prose and Poetry of Russain Modernist Poets (Tupelo Press, 2014), an anthology dedicated to the poetics of the great generation of Russian modernists.

When asked in an interview, “How does the Belarusian landscape factor into your poetic thinking?” She replied, “The village where I spent my childhood summers, away from the city and school, is the landscape that has become my tabula rasa, the primary point of any departure. If I were to strip myself off everything, one onion layer after another, what’s going to be left of me in the end is that village. It’s unbreakable, an atom. Also, it’s the only place where freedom is possible for me. The space is open, endless, and empty, and it demands nothing of you. There is no ocean to bathe in, no mountains to climb. There is flat land, covered by wild grass, and the flat sky above it, and you can walk west, east, south, and north. That’s the greatest freedom I know and want.”

Mort writes in Belarusian and English.

Valzhyna Mort is the author of Factory of Tears and Collected Body (Copper Canyon Press). She is a recipient of the Lannan Foundation Fellowship, the Bess Hokin Prize from Poetry, Amy Clampitt fellowship, the Gulf Coast translation prize and the Glenna Luschei Prairie Schooner Award. Born in Minsk, Belarus, she teaches at Cornell University and writes in English and Belarusian. Mort is also the author of her most recent book, Music for the Dead and Resurrected.

Julia Cimafiejeva was born in an area of rural Belarus that became a Chernobyl zone when she was a child. The book opens with a poet’s diary that records the course of violence unfolding in Belarus since the 2020 presidential election. It paints an intimate portrait of the poet’s struggle with fear, despair, and guilt as she goes to protests, escapes police, longs for readership, learns about the detention of family and friends, and ultimately chooses life in exile.

Music for the Dead and Resurrected

In Music for the Dead and Resurrected, Valzhyna Mort asks how we mourn after a century of silence and propaganda. How do we remember our history and sing after being silenced? Mort draws on intimate and paradoxical first-hand accounts of a past grandparent generation of the Soviet labor camps, redistribution of land, and massacres of World War II in Belarus. As her country is being run by a long-time dictator, the poet creates a ceremony of myth making for the erased history and family. Music for the Dead and Resurrected is a space where the living and the dead can coexist sharing stories, where the Belarusian woods can act as witnesses of forgotten lives, and where musical form can create a new lyric mythology and an uncompromised language of remembrance. Mort, born in Belarus and now living in America, teaches us that the remembrance of private histories has a power to confront collective, violent American myths.

“A one-of-a-kind work of passion and insight.” —Midwest Book Review

Collected Body‘s voyages begin in the rural landscapes of childhood and move through grim fairy tales toward idiosyncratic images of the sea, “this polonaise in gray-flat minor.” In her first collection of poems composed entirely in English, Valzhyna Mort writes as effortlessly about the Caribbean or the United States as she does about her native Belarus. Whether writing about sex, relatives, violence, or fish markets as opera, Mort insists on vibrant, dark truths. “Death hands you every new day like a golden coin,” she writes, then warns that as the bribe grows “it gets harder to turn down.” 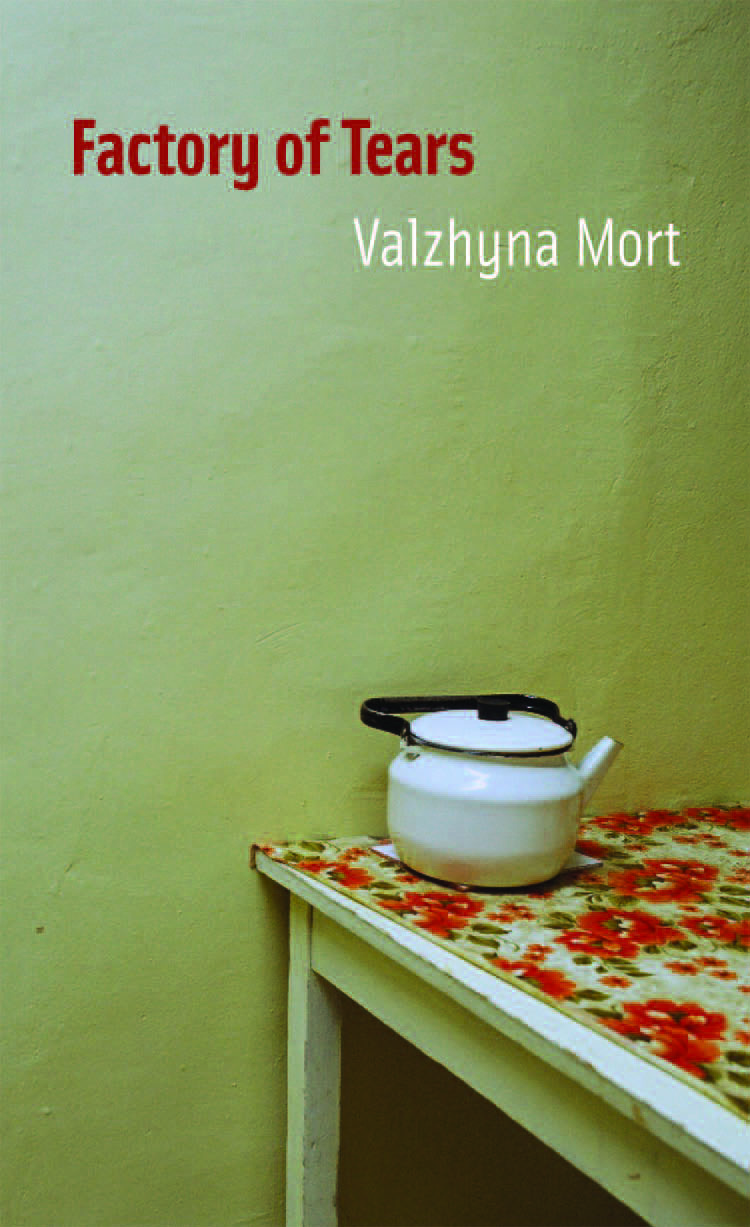 Factory of Tears is the American debut of Valzhyna Mort—and the first bilingual Belarusian-English poetry book ever published in the US. Set in a land haunted by the specter of a post-Soviet Eastern Europe, and marked by the violence of the recent past, intense moments of joy leaven the darkness. “Grandmother”—as person and idea—is a recurring presence in poems, and their startlingly fresh images—desire as the approaching bus that immediately pulls away, or pain as the embrace of a very strong god “with an unshaven cheek that scratches when he kisses you—occupy and haunt the mind. The music of her lines and litanies of phrases mesmerize the reader; then sudden discord reminds us that Mort’s world is not entirely harmonious. “I’m a recipient of workers’ comp from the heroic Factory of Tears,” she writes in the final stanza. “I have calluses on my eyes…And I’m Happy with what I have.” Engaged, voracious, and memorable, Factory of Tears is a remarkable American debut of a rising international poetry star. The translation was a collaboration between Mort, Pulitzer Prize-winning poet Franz Wright, and Elizabeth Oehlkers Wright.

• In Minsk with Valzhyna Mort — Words Without Borders

• Belarus Across the Barricades – BBC

• Read “Nocturne for a Moving Train” – The Poetry Society

The wind that makes your hair grow faster
opens a child’s mouth full of strawberry and sand.
Slow and sure
on the scales of the ocean
the child’s head outweighs the sun.

Inside of the wind—
a blister of a church,
its walls thicker than the space from wall to wall
where the wind shifts shade and light
like two rival chess pieces
or two unmatched pieces of furniture.
Inside of the church—such a stillness
that when a feather floats down in a fist of dust
it becomes a rock by the time it hits the ground.

Organ pipes glint like a cold radiator,
contained in a case of a carved tree, its branches
tied up with a snake.
Organ pedals, golden and plump, are the tree’s only fruit.

It is all about the release of weight:
the player crushes the pedals like grapes underneath his feet.
My body, like an inaccurate cashier, adds your weight to itself.
Your name, called into the wind,
slows the wind down.

When a body is ripe, it falls and rots from the softest spot.

Only when a child slips and drops off a tree,
the tree suddenly learns that it is barren.

A yoke of honey in a glass of cooling milk.
Bats playful like butterflies on power lines.
In all your stories blood hangs like braids

of drying onions. Our village is so small,
it doesn’t have its own graveyard. Our souls,
are sapped in sour water of the bogs.

Men die in wars, their bodies their graves.
And women burn in fire. When midsummer
brings thunderstorms, we cannot sleep

because our house is a wooden sieve,
and crescent lightning cut off our hair.
The bogs ablaze, we sit all night in fear.

I always thought that your old trophy Singer
would hurry us away on its arched back.
I thought we’d hold on to its mane of threads

from loosened spools along Arabic spine,
same threads that were sown into my skirts,
my underthings, first bras. What smell

came from those threads you had so long,
sown in, pulled out, sown back into the clothes
that held together men who’d fall apart

undressed. Same threads between my legs!
I lash them, and the Singer gallops!

And sky hangs only the lightning’s thread.
Like in that poem: on Berlin’s Jaegerstrasse
Arian whores are wearing shirts ripped off
sliced chests of our girls. My Singer-Horsey,

—from Factory of Tears 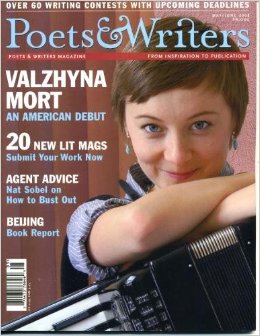 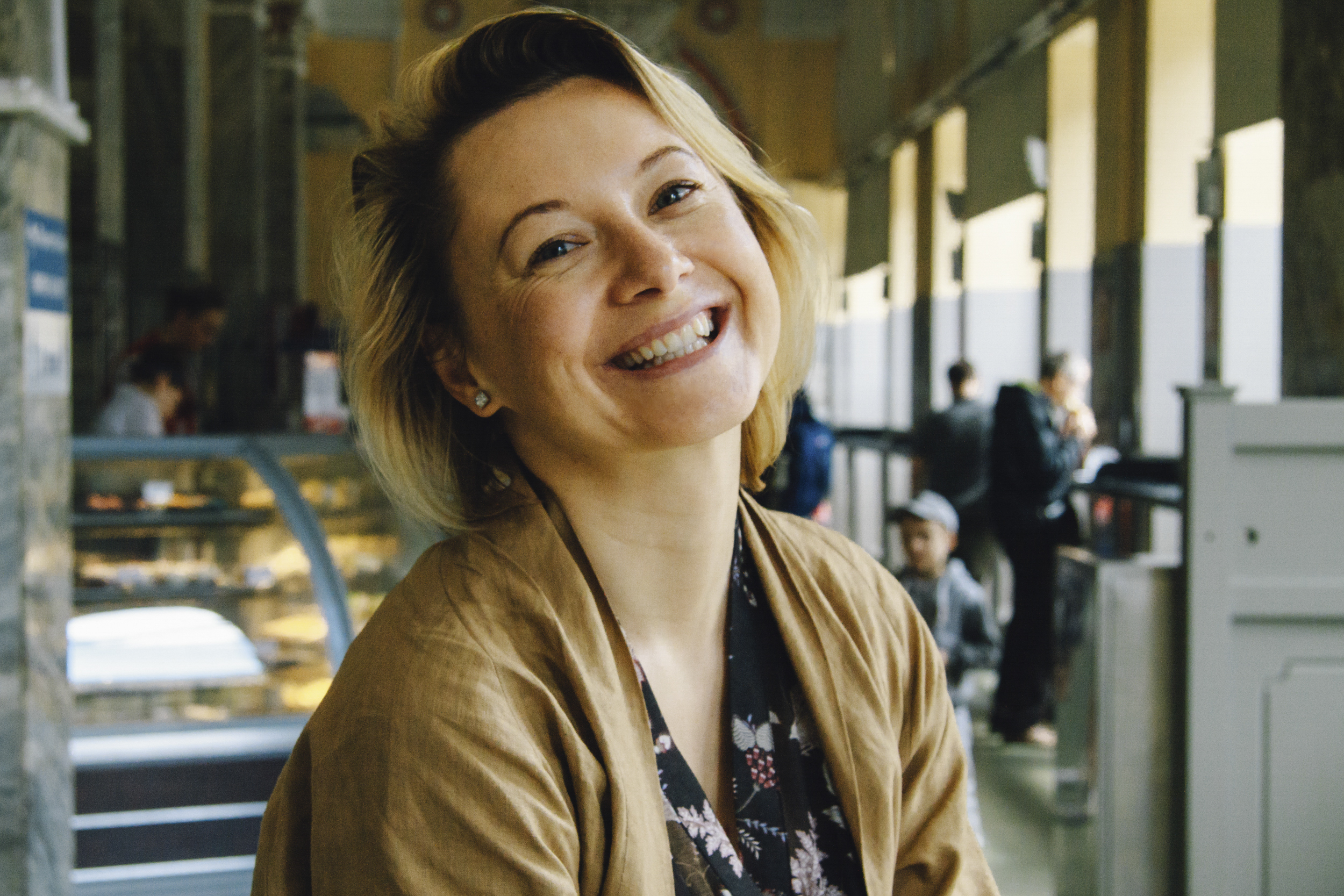