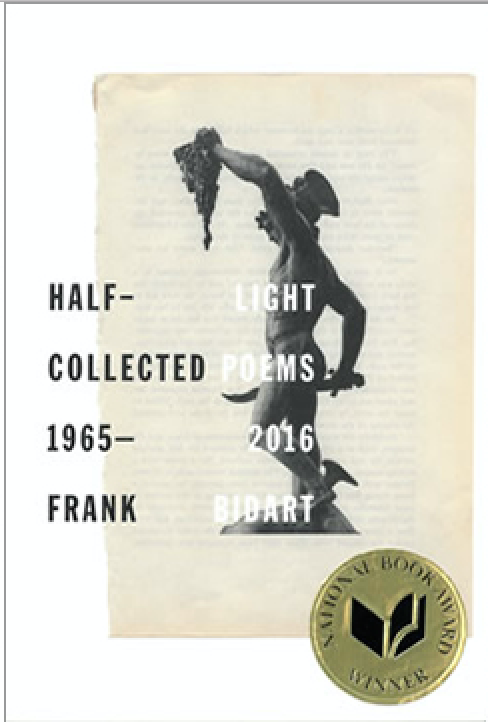 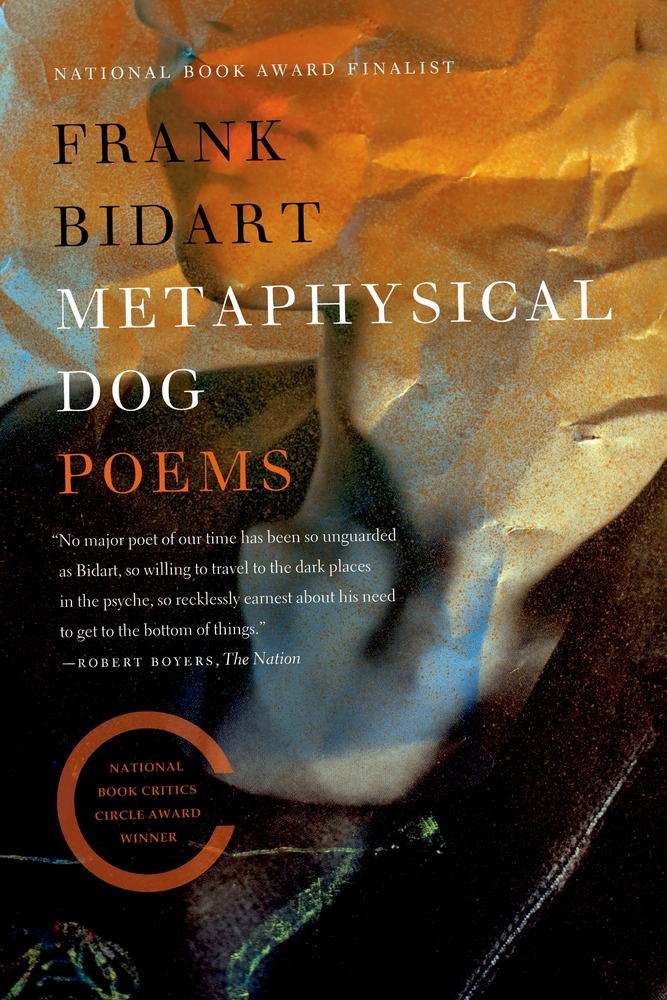 “What Bidart proposes, to balance the moral and aesthetic risks that he takes, is the largest possible conception of poetry’s powers.” —The New York Times Book Review

“The forceful starkness in Bidart’s style fits characters who try to test, or reject, or escape, the limits of the merely physical, describable world.” —Stephanie Burt

Widely acclaimed by both critics and readers as one of the most bracing and intense poets working today, Frank Bidart is the author of numerous collections of poetry, including, most recently, Half-Light: Collected Poems (2017) an anthology of his collected works for which Frank won the 2017 the National Book Award for Poetry and the 2018 Pulitzer Prize for Poetry. His other works include Metaphysical Dog (FSG, 2013), which won the 2013 National Book Critics Circle Award, the 2014 PEN/Voelcker Award, and was a finalist for the National Book Award, Watching the Spring Festival (FSG, 2008), Star Dust (FSG, 2005), Desire (FSG, 1997), a finalist for the Pulitzer Prize, and In the Western Night: Collected Poems 1965—90 (FSG, 1991). His many awards and honors include the Wallace Stevens Award, the Bollingen Prize, the Shelley Award from the Poetry Society of America, and The Paris Review’s first Bernard F. Conners Prize for “The War of Vaslav Nijinsky” in 1981. From 2003 to 2009, Bidart served as a chancellor of The Academy of American Poets.

About Bidart’s work, former U.S. Poet Laureate Louise Glück has said, “More fiercely, more obsessively, more profoundly than any poet since Berryman, Bidart explores individual guilt, the insoluble dilemma.” And The New York Times notes that Bidart “writes through passion, leaving out all but the statements that seem essential to the soul, the desire, the wisdom or the memory at hand.”

A friend of both Elizabeth Bishop and Robert Lowell, Bidart’s first books, Golden State and The Book of the Body, both published in the 1970s, gained critical attention and praise, but his reputation as a poet of uncompromising originality was made with The Sacrifice, published in 1983. Essential to that originality are Bidart’s trademark dramatic monologues—including poems written in the voices dancers, victims of bulimia, and murderers—as well as his long, episodic “Hour of the Night” poems, of which he has published three so far in his lifetime.

Raised in California, Bidart attended the University of California—Riverside and Harvard University. In 2007, Bidart’s work was the subject of Fastening the Voice to the Page, a book-length discussion of Bidart’s work that features contributions from Elizabeth Bishop, Seamus Heaney, Donald Hall, Robert Lowell, Robert Pinksy, Louise Glück, and many others.

Frank Bidart is the author of numerous collections of poetry, including Half-Light: Collected Poems (2017), for which Frank won the 2017 National Book Award for Poetry and the 2018 Pulitzer Prize for Poetry, Metaphysical Dog, which won the 2013 National Book Critics Circle Award and was a finalist for the National Book Award. His other books include include Watching the Spring Festival, Star Dust, Desire, a finalist for the Pulitzer Prize, and In the Western Night: Collected Poems 1965—90. He is also the co-editor of the Collected Poems of Robert Lowell. His many awards and honors include the Wallace Stevens Award, the Bollingen Prize, the Shelley Award from the Poetry Society of America, and The Paris Review’s first Bernard F. Conners Prize for “The War of Vaslav Nijinsky” in 1981. From 2003 to 2009, Bidart served as a chancellor of The Academy of American Poets. He lives in Cambridge, Massachusetts, where he has taught at Wellesley College since 1972.

Winner of the 2017 National Book Award for Poetry, these poems of Frank Bidart’s perform one of the most remarkable transmutations of the body into language in contemporary literature. His pages represent the human voice in all its extreme registers, whether it’s that of the child-murderer Herbert White, the obsessive anorexic Ellen West, the tormented genius Vaslav Nijinsky, or the poet’s own. And in that embodiment is a transgressive empathy, one that recognizes our wild appetites, the monsters, the misfits, the misunderstood among us and inside us. Few writers have so willingly ventured to the dark places of the human psyche and allowed themselves to be stripped bare on the page with such candor and vulnerability. Over the past half century, Bidart has done nothing less than invent a poetics commensurate with the chaos and appetites of our experience. Half-light encompasses all of Bidart’s previous books, and also includes a new collection, Thirst, in which the poet austerely surveys his life, laying it plain for us before venturing into something new and unknown. Here Bidart finds himself a “Creature coterminous with thirst,” still longing, still searching in himself, one of the “queers of the universe.” Visionary and revelatory, intimate and unguarded, Bidart’s Half-light: Collected Poems 1965-2017are a radical confrontation with human nature, a conflict eternally renewed and reframed, restless line by restless line.

Words and sex, art and flesh: In Metaphysical Dog, Bidart explores their nexus. The result stands among this deeply adventurous poet’s most powerful and achieved work, an emotionally naked, fearlessly candid journey through many of the central axes, the central conflicts, of his life, and ours. Bidart explores what he sees as fundamental in human feeling, what psychologists and mystics have called the “hunger for the Absolute”—a hunger as fundamental as any physical hunger. This hunger must confront the elusiveness of the Absolute, our self-deluding, failed glimpses of it.

WATCHING THE SPRING FESTIVAL (2008)
Less embattled than his earlier work, less actively violent, these poems, by conceding time’s finalities and triumphs, acquire a dark radiance unlike anything seen before in Bidart’s long career. Mortality forces the self to question the relation between the actual life lived and what was once the promise of transformation. At the center of the book is an ambitious meditation on the Russian ballerina Ulanova, Giselle, and the nature of tragedy. All this gives new dimension and poignance to Bidart’s recurring preoccupation with the human need to leave behind some record or emblem, a made thing that stands, in the face of death, for the possibilities of art.

STAR DUST (2002)
In this profound and unforgettable book, the dream beyond desire is rooted in the drive to create, a drive tormented at every stage by failure, as the temporal being fights for its survival by making an eternal life. Bidart is a poet of passionate originality, and Star Dust shows that the forms of this originality continue to deepen and change as he constantly renews his contract with the idea of truth.

DESIRE (1997)
Desire contains some of Bidart’s most luminous and intimate work—poems about the art of writing, Eros, and the desolations and mirror of history. The book’s second half pushes the overt lyricism of the opening section into even more ambitious territory. “The Second Hour of the Night” may be Bidart’s most profound and complex meditation on the illusion of will, his most seductive dramatic poem to date.

IN THE WESTERN NIGHT: COLLECTED POEMS 1965-90 (Poetry, 1991)
In the Western Night brings together in one volume twenty-five years of the earliest poems, including many previously unpublished poems, by one of the most exciting and gifted poets writing today. To read them is to be both discomforted and fascinated by Bidart’s subject matter: the lives of a bulimic and an amputee, Nijinsky’s insanity, the loss of friends and lovers, and the poet’s own childhood, blighted by parental alcoholism and neglect.

Coachella—I’d never seen a sky
so full of stars, as if the dirt of our lives

still were sprinkled with glistening
white shells from the ancient seabed

beneath us that receded long ago.
Parallel. We lay in parallel furrows.

—That suffocated, fearful
look on your face.

Jim, yesterday I heard your wife on the phone
tell me you died almost nine months ago.

the conversation that in
nature and alive we never had. Now not ever.

We have not spoken in years. I thought
perhaps at ninety or a hundred, two

broken-down old men, we wouldn’t
give a damn, and find speech.

you say you
knew. I say I knew you

knew. You say
There was no place in nature we could meet.

You say this as if you need me to
admit something. No place

in nature, given our natures. Or is this
warning? I say what is happening now is

happening only because one of us is
dead. You laugh and say, Or both of us!

Our words
will be weirdly jolly.

That light I now envy
exists only on this page.