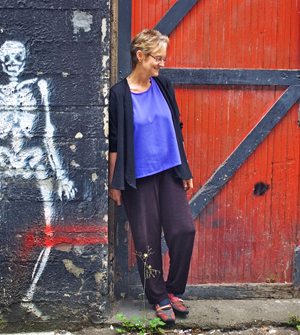 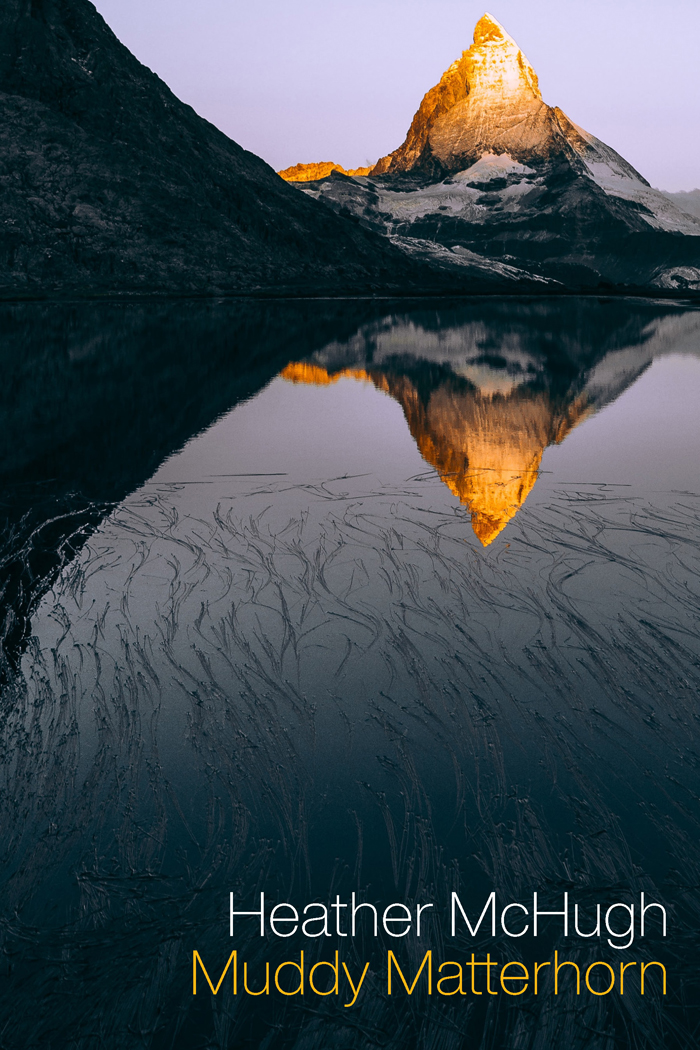 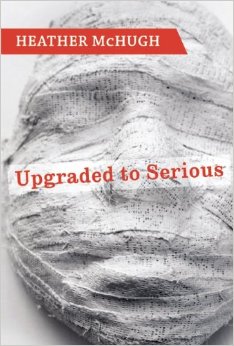 “Her writing is so alert to itself, so alert to language, it’s like watching a dancer on a mirrored floor, stepping on her steps. She’s practically playing with her words as she writes them down.” —Robert Hass

“All of her lines are demanding, especially her last lines—puzzling yet provocative, they’re like little switches that flip at the end, sending the reader back into the poet’s maze of words.” —New York Times Book Review

Heather McHugh is the author of nine volumes of poetry including Muddy Matterhorn (2020), Eyeshot (2004), which was shortlisted for the Pulitzer Prize and a New York Times Notable book, Hinge and Sign (1994), which was a finalist for the National Book Award and named a Notable Book of the Year by the New York Times. Her most recent collection, Upgraded to Serious (2009), was described by the New Yorker as “animated but serious…meaning and humor can be found in a single word.” Her other titles include The Father of Predicaments (2001), Shades (1988), To the Quick (1987), A World of Difference (1981), and Dangers: Poems (1977). McHugh served as the editor of The Best American Poetry in 2007.

An acclaimed translator, McHugh has done versions of poems by Jean Follain and Horace. She worked alongside translator Nikolai Popov on Glottal Stop: Poems of Paul Celan, which was called “dazzlingly creative” by J.M.Coetzee and won the Griffin International Poetry Prize in 2001. The New York Times Book Review wrote “In Glottal Stop, the translators take risks, but the poetic rewards are at times breathtaking.” The same team of McHugh and Popov translated the poems of Blaga Dimitrova, who served for a while as vice president of Bulgaria after the political changes of 1989.

Her honors include two grants from the National Endowment for the Arts, PEN, a Lila Wallace/Reader’s Digest Award, and a Guggenheim Fellowship. In 2009 she was awarded a MacArthur Foundation “Genius Grant”—the judges citation described her as “a poet whose intricately patterned compositions explore various aspects of the human condition and inspire wonder in the unexpected associations that language can evoke;” and her work as combining “a range of literary traditions in poems that focus on our struggle to mediate the world and our place in it through the filter of sensory perceptions. She mines words for contradictions and double-meanings, offering the reader an expansive, fresh perspective on such themes as love and mortality.”

A dedicated scholar and teacher, McHugh published a collection of criticism, Broken English: Poetry and Partiality and, for 30 years, held a chair at the University of Washington in Seattle. She has also served as a visiting faculty member at the Warren Wilson MFA Program for Writers for over 30 years.

McHugh’s current project is CAREGIFTED, a nonprofit organization that grants respite to long-term family caregivers—“full-time caregivers of the most severely disabled have sacrificed their own leisure, resources and ambitions to serve those unable to serve themselves; such acts of love go largely unnoticed because these caregivers are generally confined to their homes, mired in unpaid labors”—by offering weeks away in inspiring locations—scenic vacation spots where caregivers can refresh their perspectives and record their views in words and images, returning home better rested and represented. www.caregifted.org

Heather McHugh is the author of nine volumes of poetry, including Muddy Matterhorn, Eyeshot, which was shortlisted for the Pulitzer Prize, and Hinge and Sign, which was a finalist for the National Book Award. She is the recipient of the prestigious MacArthur “Genius” Grant, and her work has been recognized by the National Endowment for the Arts, PEN, and the Guggenheim Foundation. She has been a fellow of the American Academy of Arts and Sciences since 2006. For 30 years she held a chair at the University of Washington in Seattle.

Heather McHugh’s first book in a decade, Muddy Matterhorn, reclaims the mix of high and low that is her sensibility’s signature, in matters practical and philosophical, semantic and stylistic, mortal and transitory, amorous and political, hilarious and heartbreaking. With fierce attacks on technology and social structures, McHugh finds a way to enjoy and empathize with humanity on her own terms. Ever the outsider, McHugh combines a strong sense of self with a determination to love people and the worlds they build without losing her biting criticism or witty rejection of societal norms and expectations. She is both pragmatic and theorizing, esoteric and identifiable. The joy and anger in these poems join to form an empowered and impassioned declaration of self in a chaotic time.

“McHugh’s short, jerky lines, odd rhymes, bemused gravity and slant perspective on the world at hand bring Emily Dickinson to mind…. McHugh remains one of our most important and unusual poets…” —Publishers Weekly

National Book Award finalist and 2009 MacArthur Fellow Heather McHugh presents a fast-paced, verbally dexterous, and brilliantly humorous book. Utilizing medical terminology and iconography to work through loss and detachment, McHugh’s startling rhymes and rhythms—along with her sarcastic self-reflection and infectious laughter—serve as antidotes to the sufferings of the world. Being “upgraded to serious” from critical condition is a nod to the healing powers of poetry. 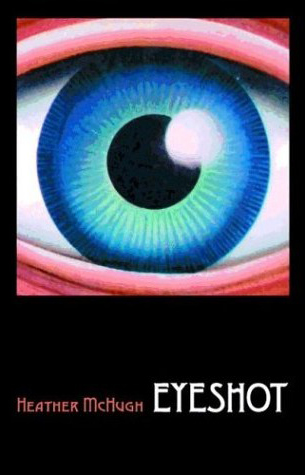 A brooding, visionary work that takes aim at the big questions—those of love and death. The poems suggest that such immensities balance on the smallest details, and that a range of human blindness is inescapable. The power of this new work comes from its delicate yet tenacious fidelity to the ever-unfolding senses of sense. The poems invite the reader to follow careening words and insights through passages both playful and profound. Her “Fido, Jolted by Jove” reveals the tension endemic to both language and living: “the world itself is worried.” Yet the same poem remarks on the high price of any reductive fix: “a brain this insecure may need another bolt be driven in it.” This movement between anxiety and the human compulsion for order informs Eyeshot‘s darkly comic, 20/20 acuity. 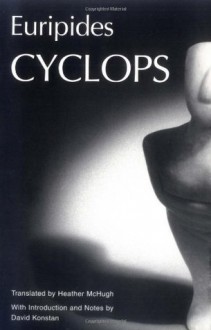 CYCLOPS (THE GREEK TRAGEDY IN NEW TRANSLATION) BY EURIPIDES 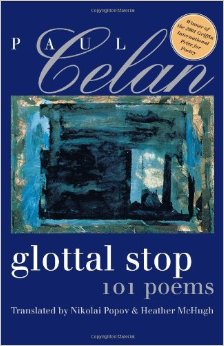 This collection of poetry by the legendary German poet whose parents were murdered in Nazi concentration camps and who eventually committed suicide features essays on Jewish heritage and alienation. 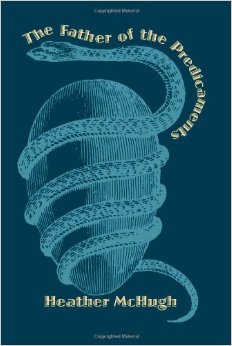 THE FATHER OF THE PREDICAMENT

“McHugh’s best poems are both comic and profound: their depth comes from the belly laugh of the Medusa.” —Publishers Weekly

In this witty and deeply felt collection, McHugh takes her cue from Aristotle, who wrote that “the father of the predicaments is being.” For McHugh, being is intimately, though perhaps not ultimately, bound to language, and these poems cut to the quick, delivering their revelations with awesome precision. 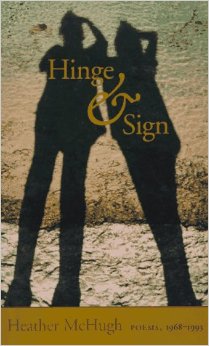 “McHugh brings poems from four previous volumes together with a significant amount of new work. In a brief introduction, she writes that to be a writer with a reader ‘is rather like being, oneself, of two minds, at every turn: hinge and sign.’ Not only are there hinges of lyrical words keeping together the signs in her poems; they also contain a woman with one glass eye, a waddling seal, Fido the Uberpooch, and a martyr in an iron mask. McHugh artfully entwines the prosaic with the empyrean, twisting mundane images into verbal feasts, letting language flow through her hands rather than shaping it to her will. Often she makes wry, witty observations as though she were a kind of contemporary Greek chorus chiming in from the stage’s dark recesses. This collection allows one to appreciate the development of her poetry over 25 years and to witness the increasing strength and maturity of her voice.” —Booklist 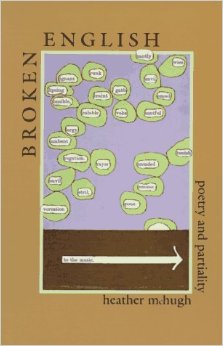 “When I call poetry a form of partiality,” writes Heather McHugh, “I mean its economies operate by powers of intimation: glimmering and glints, rather than exhaustible sums. It is a broken language from the beginning, brimming with non-words: all that white welled up to keep the line from surrendering to the margin; all that quiet, to keep the musics marked.” In Broken English, McHugh applies her poetic sensibility and formidable critical insight to topics ranging from the poetry of Valéry and Rilke to ancient Greek drama and Yoruba folk songs, offering intense, passionate, highly personal readings that are informed and unified by her concern for the relationships among language, culture, and poetry.

In Praise of Pain

A brilliance takes up residence in flaws—
a brilliance all the unchipped faces of design
refuse. The wine collects its starlets
at a lip’s fault, sunlight where the nicked
glass angles, and affection where the eye
is least correctable, where arrows of
unquivered light are lodged, where someone
else’s eyes have come to be concerned.
For beauty’s sake, assault and drive and burn
the devil from the simply perfect sun.
Demand a birthmark on the skin of love,
a tremble in the touch, in come a cry,
and let the silverware of nights be flecked,
the moon pocked to distribute more or less
indwelling alloys of its dim and shine
by nip and tuck, by chance’s dance of laws.
The brightness drawn and quartered on a sheet,
the moment cracked upon a bed, will last
as if you soldered them with moon and flux.
And break the bottle of the eye to see
what lights are spun of accident and glass.

Everything obeyed our laws and
we just went on self-improving
till a window gave us pause and
there the outside world was, moving.
Five apartment blocks swept by,
the trees and ironwork and headstones
of the next town’s cemetery.
Auto lots. Golf courses. Rest homes.
Blue-green fields and perishable vistas
wars had underscored in red
were sweeping past,
with cloudscapes, just
as if the living room were dead.
Which way to look? Nonnegative?
Nonplussed? (Unkilled? Unkissed?)
Look out, you said; the sight’s on us:
If we don’t move, we can’t be missed.

—from Upgraded to Serious 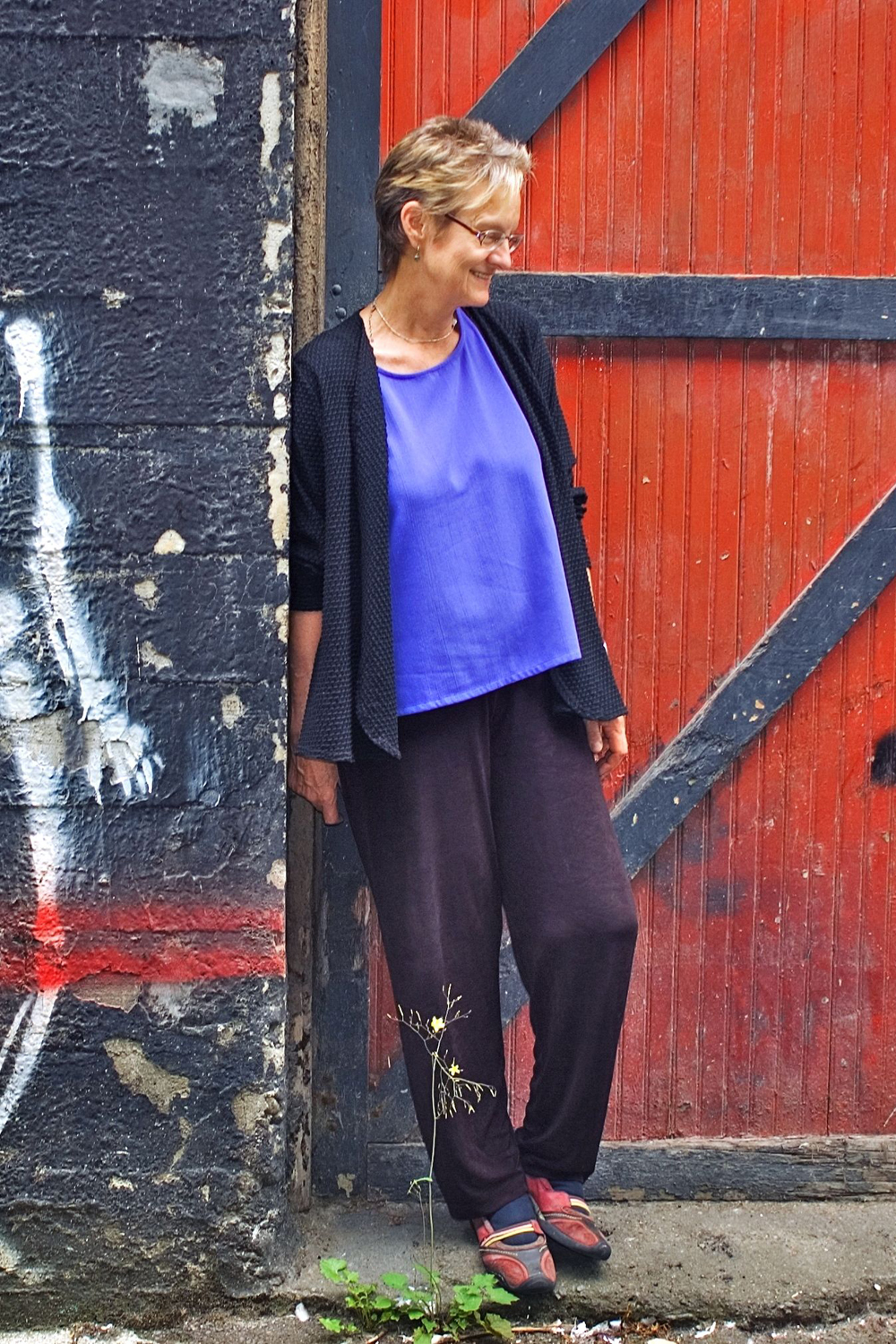 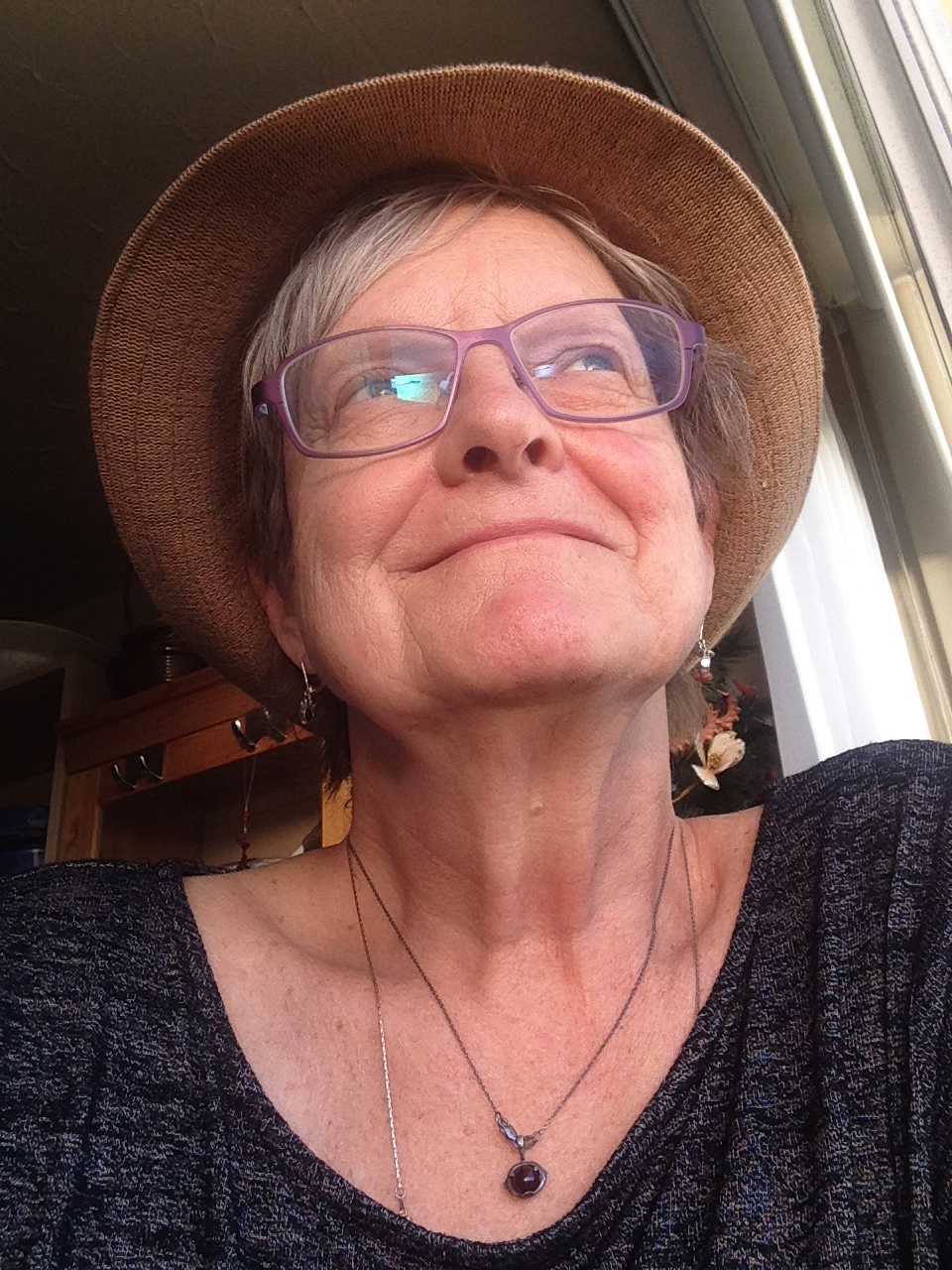