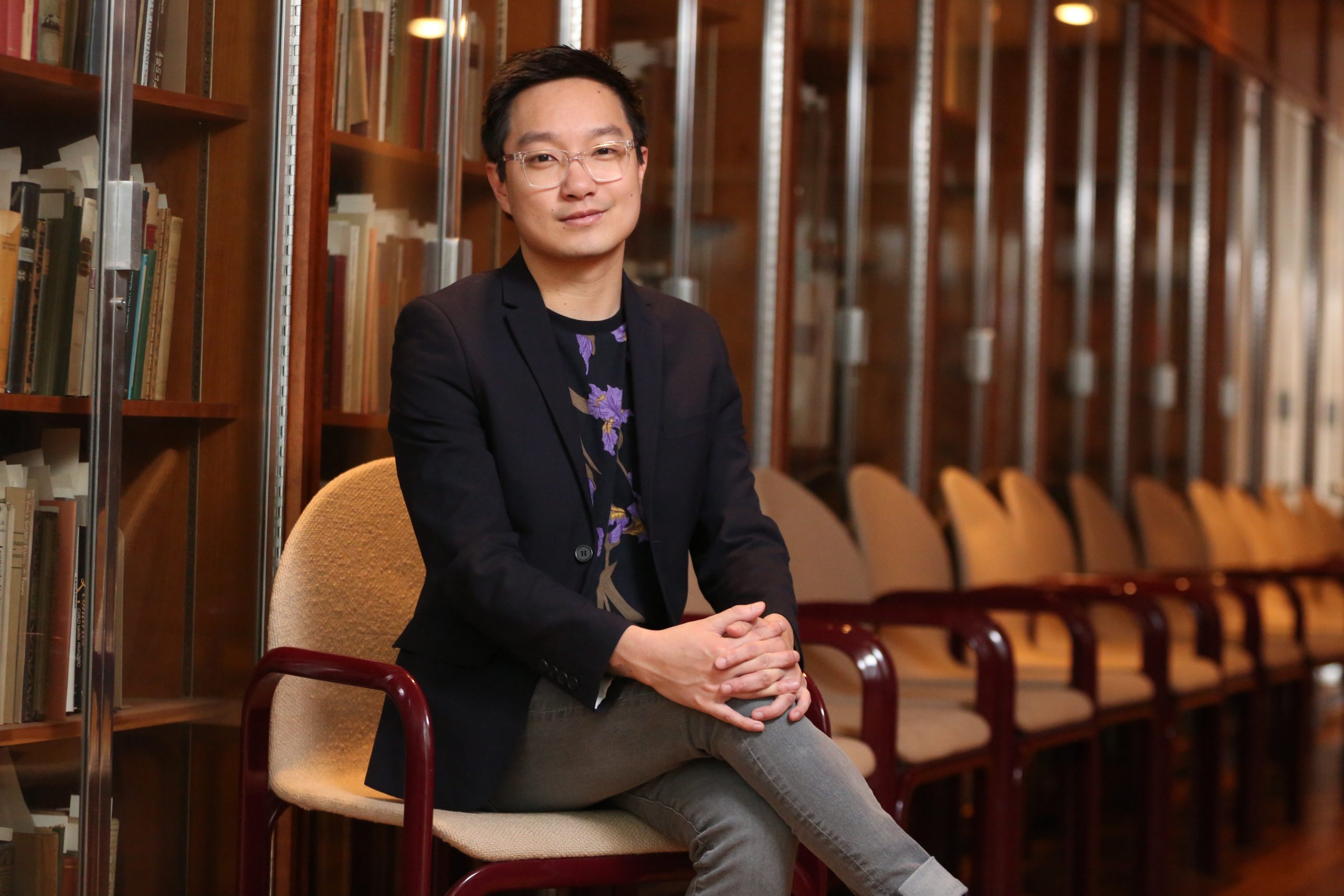 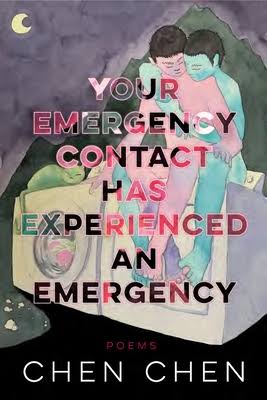 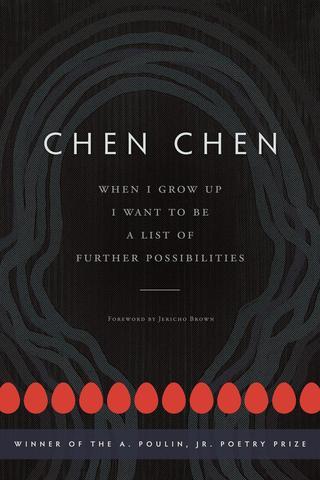 “Chen Chen is a poet of Whitman’s multitudes and of Langston Hughes’ blues, of Dickinson’s ‘so cold no fire can warm me’ and of Michael Palmer’s comic interrogation. What unifies the brilliance is a voice desperate to believe that within every one of life’s sadnesses there is also hope, meaning, and—if we are willing to laugh at ourselves—humor. Chen is a poet I’ll be reading for the rest of my life.” —Jericho Brown

“Chen Chen muses his way through the idea of inheritance (specifically, what it means to inherit things like love and family), a concept that is central to his identity as a queer Chinese-American immigrant.“ —Literary Hub

Chen Chen is the author of When I Grow Up I Want to Be a List of Further Possibilities (BOA Editions, 2017), which won the A. Poulin Jr. Poetry Prize, Thom Gunn Award for Gay Poetry, and the GLCA New Writers Award. Chen is also the author of Your Emergency Contact Is Experiencing An Emergency (BOA Editions, 2022). In this highly anticipated second collection, Chen continues his investigation of family, both blood and chosen, examining what one inherits and what one invents, as a queer Asian American living through an era of Trump, mass shootings and the COVID-19 pandemic. Hybrid in form and set in New England, West Texas and a landlocked province of China, among other places, Your Emergency Contact Has Experienced an Emergency offers an insatiable curiosity about how it is we keep finding ways to hold onto one another.

Longlisted for the National Book Award, When I Grow Up I Want to Be a List of Further Possibilities was also a finalist for the Lambda Literary Award for Gay Poetry, and was named one of the best of 2017 by The Brooklyn Rail, Entropy, Library Journal, and others. About the collection, Stephanie Burt says,“As Chen’s younger self had to escape from constricting familial expectations (become a lawyer, marry a woman, buy a house), the adult writer has to escape from the constrictions of autobiography, into hyperbole, stand-up comedy, fairy tale, twisted pastoral. It’s easy to imagine a young reader seeing himself here as he had not seen himself in poems before.” He is  the author of two chapbooks, Set the Garden on Fire (Porkbelly Press, 2015) and Kissing the Sphinx (Two of Cups Press, 2016).

In an interview with NPR, Chen explained, “‘I felt like I couldn’t be Chinese and American and gay all at the same time. I felt like the world I was in was telling me that these had to be very separate things.’ As someone who was struggling with his sexuality and thinking about identity— with immigrant parents and wondering how to come out, ‘Poems were a way for those different experiences to come together, for them to be in the same room.'”

His work has appeared in many publications, including Poetry, Tin House, Poem-a-Day, The Best American Poetry, Bettering American Poetry, and The Best American Nonrequired Reading. Recently, his work has been translated into French, Greek, Spanish, and Russian. Poets & Writers Magazine featured him in their Inspiration Issue as one of “Ten Poets Who Will Change the World.” He has received fellowships from Kundiman, Lambda Literary, and the Saltonstall Foundation.

He holds an MFA from Syracuse University, where he was a University Fellow, and a PhD in English and Creative Writing from Texas Tech University, where he received a J.T. and Margaret Talkington Fellowship and won the Warren S. Walker Award for Best Critical Writing. He was the 2018-2022 Jacob Ziskind Poet-in-Residence at Brandeis University and currently teaches for the low-residency MFA programs at New England College and Stonecoast.

Chen Chen is the author of two books of poetry, Your Emergency Contact Has Experienced an Emergency (BOA Editions, 2022) and When I Grow Up I Want to Be a List of Further Possibilities (BOA Editions, 2017), which was longlisted for the National Book Award and won the Thom Gunn Award, among other honors. His work appears in many publications, including Poetry and three editions of The Best American Poetry. He has received two Pushcart Prizes and fellowships from Kundiman, the National Endowment for the Arts, and United States Artists. He was the 2018-2022 Jacob Ziskind Poet-in-Residence at Brandeis University and currently teaches for the low-residency MFA programs at New England College and Stonecoast. He lives with his partner, Jeff Gilbert, and their pug, Mr. Rupert Giles.

What happens when everything falls away, when those you call on in times of need are themselves calling out for rescue? In his highly anticipated second collection, Chen Chen continues his investigation of family, both blood and chosen, examining what one inherits and what one invents, as a queer Asian American living through an era of Trump, mass shootings and the COVID-19 pandemic. Working, always working in the wrecked heart of this new collection is a switchboard operator, picking up and connecting calls. Raucous 2 a.m. prank calls. Whispered-in-a-classroom emergency calls. And sometimes, its pages record the dropping of a call, a failure or refusal to pick up. With irrepressible humor and play, these anarchic poems celebrate life, despite all that would crush aliveness. Hybrid in form and set in New England, West Texas and a landlocked province of China, among other places, Your Emergency Contact Has Experienced an Emergency refuses neat categorizations and pat answers. Instead, the book offers an insatiable curiosity about how it is we keep finding ways to hold onto one another.

“An ecstatic capitalized blessing, GESUNDHEIT! examines what we can’t suppress — ‘head to wall collisions. Stuttering, pre-thought words’ — and so must celebrate, interrogate and bring to light. This co-authored chapbook is a tour de force of radiant interconnectivity, (trust me on this) entire-body laugh out loud confession, and incisive social critique. Most of all, these gorgeous poems hold high the cherished intimacy that is activated in deep friendship. ‘We are busy listening to friendship in the softest part of our pelvises.’ Don’t miss this jewel of a book.” — Sarah Gambito

In this ferocious and tender debut, Chen Chen investigates inherited forms of love and family–the strained relationship between a mother and son, the cost of necessary goodbyes–all from Asian American, immigrant, and queer perspectives. Holding all accountable, this collection fully embraces the loss, grief, and abundant joy that come with charting one’s own path in identity, life, and love.

• 10 Books to Read Aloud With Your Boo (or Bestie) – Shondaland

• The Books Briefing: The Coming-of-Age of Queer Literature in America — The Atlantic

• I Invite My Parents to a Dinner Party – Slow Down Show

IF I SHOULD DIE TOMORROW, PLEASE NOTE I THAT I WILL MISS THE PARTICULAR

music of the word “callipygian,”
which means the having of well-shaped buttocks.
I will miss the particular cruelty

I will miss the particularly high volume
YES of correctly completing this tongue twister,
even once. & the deadpan ditty

of the English translation: “Mr. Shi, the poet
from a stone den, likes to eat lions. He pledges
solemnly to eat ten lions. Regularly

he goes to the market to look at the lions.”
I will miss the roar of those lions,
hungering for freedom

while Mr. Shi hungers for them. & outside
the market, on a nearby street, the bright
ding-ding of a bicycle bell. & the messenger

singing, A telegram, a telegram
from overseas . . .
& the sound of the sea.

The sound the sea makes at night,
delivering its own telegrams—
a sort of sensual

moo. I will miss the particular quiet
of my body, your body, opening
a window to listen. 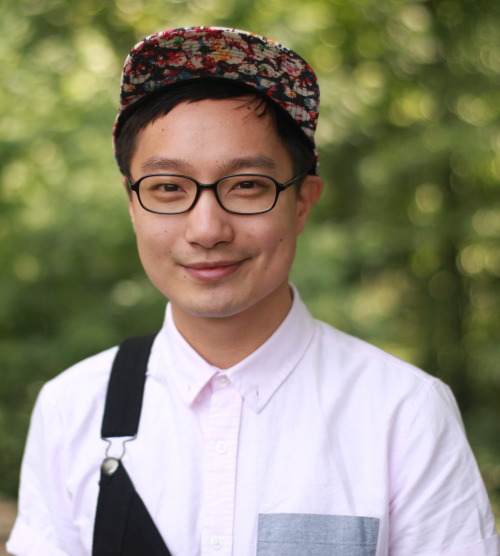 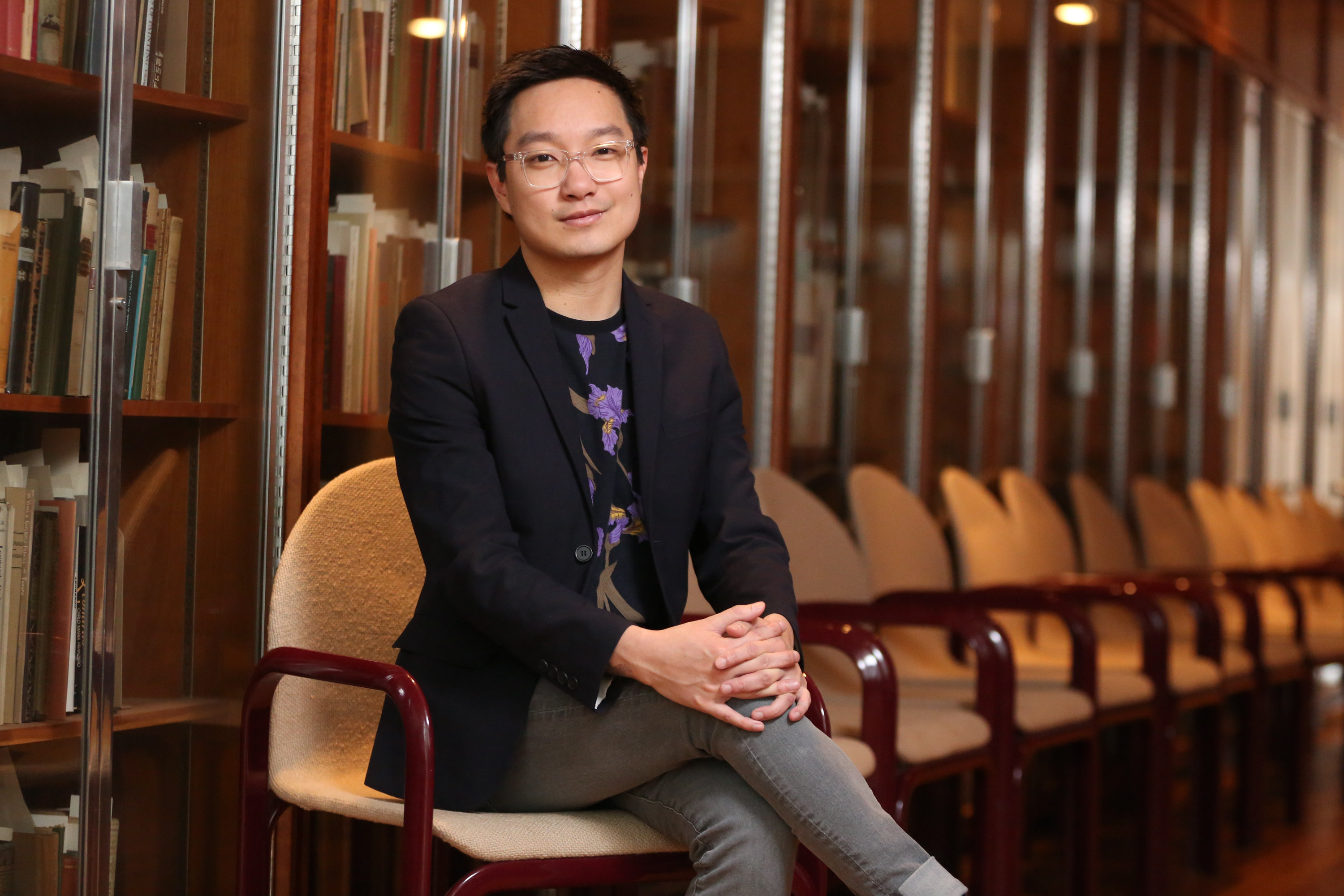 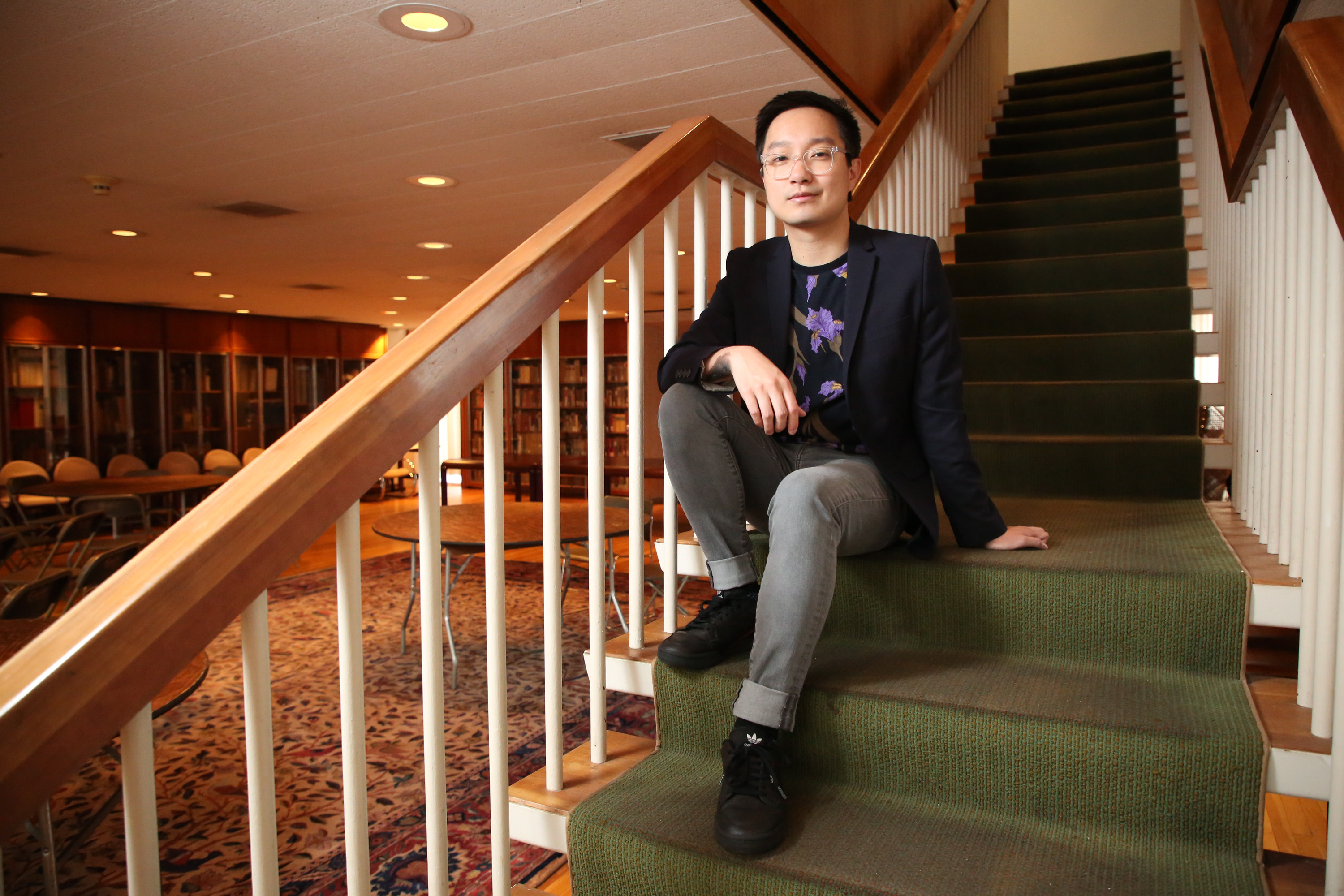 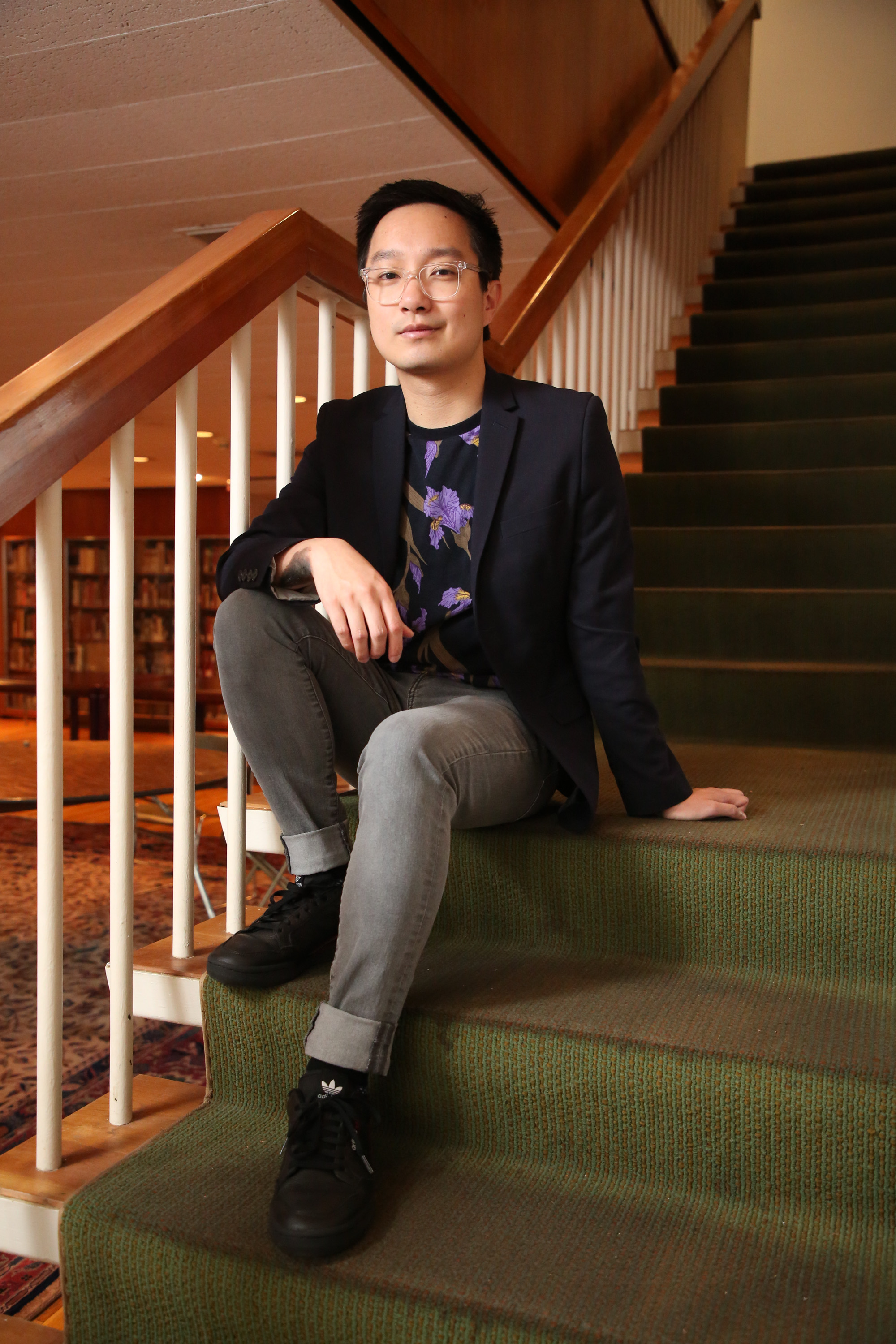