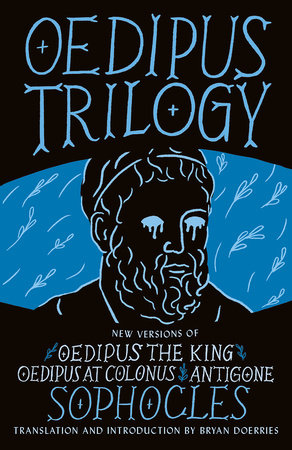 Here are Oedipus the King, Oedipus at Colonus, and Antigone, in fresh new versions for contemporary readers and audiences. Each has been the basis for groundbreaking theatrical performances by Theater of War Productions, in which actors present dramatic readings, followed by town hall-style discussions designed to confront social issues by drawing out raw and personal reactions to themes highlighted in the plays.

The Oedipus Project is an innovative digital initiative that presents scenes from Oedipus the King as a catalyst for frank and restorative online conversations about the impact of the COVID-19 pandemic upon diverse communities. First performed in 429 BC during the time of a plague that killed one-third of the Athenian population, it is a story of arrogant leadership, ignored prophecy, and a pestilence that ravages the city of Thebes–a story that is as relevant now as it was in its own time.

Oedipus at Colonus will be the basis for a forthcoming Theater of War project to engage with the efforts, ordeals, and sacrifices of frontline medical providers.

Antigone in Ferguson is a pioneering project that fuses dramatic readings from Antigone with live choral music, culminating in powerful, healing discussions about race and social justice. Antigone in Ferguson was conceived in the wake of Michael Brown’s death in 2014, through a collaboration between Theater of War Productions and community members from Ferguson, Missouri, and premiered at Normandy High School, Michael Brown’s alma mater.