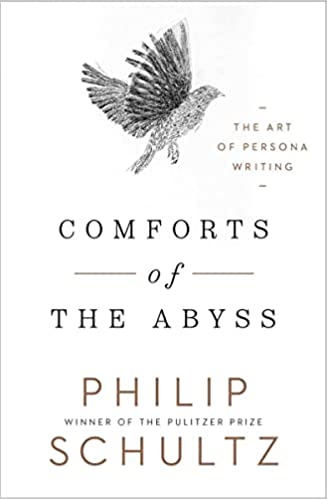 “In this tour de force on the artist’s life, Philip Schultz takes us deeply and intimately into the many perils of the writer’s perpetually hovering shadow of self-doubt, of fear and anger and shame and the astonishing truths that can be discovered if only the artist can find a way through―perhaps simply in the voice of another. Erudite, emotionally naked, and profoundly moving, Comforts of the Abyss is an essential and unforgettable work.” ―Andre Dubus III

Throughout his growth as a writer, acclaimed poet Philip Schultz has battled with the dark voice in his head―the “shitbird,” as his late friend the poet Ralph Dickey termed it―that whispers his insecurities and questions his ability to create. Persona writing, a method of borrowing the voice and temperament of accomplished writers, offers him imaginative distance and perspective on his own negative inclinations. In this candid and generous book, Schultz reflects on his early life in an immigrant neighborhood of upstate New York, his first writing experiments inspired by Ernest Hemingway and John Keats, his struggles with dyslexia, and the failures he witnessed in his father’s life and his own. Through surprising, sometimes humorous, and encouraging encounters with the writers who influence him―including Elizabeth Bishop, Joan Didion, and Norman Mailer―as well as moving experiences of loss, Schultz learns how to fashion personas out of pain. Perceptive, enlightening, and profound, Comforts of the Abyss reveals how persona writing can be used as a tool for unlocking a writer’s own story, the philosophy on which Schultz founded The Writers Studio in 1987.