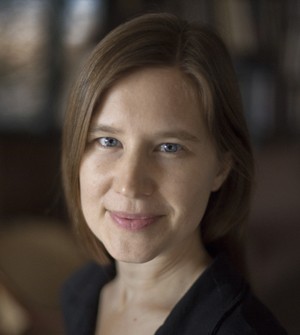 “The essayist Eula Biss is something of a specialist at handling our twitchiest, most combustible metaphors.” —New York Times

“Biss may be the most relevant essayist going.” —Barnes and Noble Review

“Our fears are informed by history and economics, by social power and stigma, by myths and nightmares.” —Eula Biss

A frank and fascinating exploration of race and racial identity, Salon called Notes From No Man’s Land, “the most accomplished book of essays anyone has written or published so far in the 21st century…. It provokes, troubles, charms, challenges, and occasionally hectors the reader, and it raises more questions than it answers. It is strident and brave in its unwillingness to offer comfort, and, unlike all but a handful of the best books I have ever read, it is unimpeachably great.”

Eula Biss is the author of three books: On Immunity: An Inoculation, a finalist for the National Book Critic Circle Award for nonfiction;  Notes from No Man’s Land: American Essays, winner of the National Book Critic Circle Award for criticism, and a collection of poetry, The Balloonists. Her work has been supported by a Guggenheim Fellowship, a Howard Foundation Fellowship, an NEA Literature Fellowship, and a Jaffe Writers’ Award. She holds a B.A. in nonfiction writing from Hampshire College and a M.F.A. in nonfiction writing from the University of Iowa. Her essays have recently appeared in The Best American Nonrequired Reading and the Touchstone Anthology of Contemporary Nonfiction as well as in The Believer, Gulf Coast, Denver Quarterly, Third Coast, and Harper’s. Eula Biss and John Bresland are the Chicago-based band STET Everything.

“A thoughtful and probing analysis of the cultural myths surrounding vaccination. Biss mines within herself and within her community to understand how and why such myths gain traction in society.” —Danielle Ofri, MD

Why do we fear vaccines? A provocative examination by Eula Biss, the author of Notes from No Man’s Land, winner of the National Book Critics Circle Award. Upon becoming a new mother, Eula Biss addresses a chronic condition of fear—fear of the government, the medical establishment, and what is in your child’s air, food, mattress, medicine, and vaccines. She finds that you cannot immunize your child, or yourself, from the world. In this bold, fascinating book, Biss investigates the metaphors and myths surrounding our conception of immunity and its implications for the individual and the social body. As she hears more and more fears about vaccines, Biss researches what they mean for her own child, her immediate community, America, and the world, both historically and in the present moment. She extends a conversation with other mothers to meditations on Voltaire’s Candide, Bram Stoker’s Dracula, Rachel Carson’s Silent Spring, Susan Sontag’s AIDS and Its Metaphors, and beyond. On Immunity is a moving account of how we are all interconnected—our bodies and our fates.

In their starred review, Kirkus Review writes, “Biss ably tracks the progress of immunization. . . . Biss also administers a thoughtful, withering critique to more recent fears of vaccines—the toxins they carry, from mercury to formaldehyde, and accusations of their role in causing autism. The author keeps the debate lively and surprising, touching on Rachel Carson here and ‘Dr. Bob’ there. She also includes her father’s wise counsel, which accommodates the many sides of the topic but arrives at a clear point of view: Vaccinate. Brightly informative, giving readers a sturdy platform from which to conduct their own research and take personal responsibility.”

“I fought with this book. I shouted, ‘Amen!’ I cursed at it for being so wildly wrong and right. It’s so smart, combative, surprising, and sometimes shocking that it kept me twisting and turning in my seat like I was on some kind of sociopolitical roller coaster ride. Eula Biss writes with equal parts beauty and terror. I love it.” —Sherman Alexie

In a book that begins with a series of lynchings and ends with a series of apologies, Eula Biss explores race in America.  Her response to the topic is informed by the experiences chronicled in these essays — teaching in a Harlem school on the morning of 9/11, reporting for an African American newspaper in San Diego, watching the aftermath of Katrina from a college town in Iowa, and settling in Chicago’s most diverse neighborhood.  As Biss moves across the country from New York to California to the Midwest, her essays move across time from biblical Babylon to the freedman’s schools of Reconstruction to a Jim Crow mining town to post-war white flight.  She brings an eclectic education to the page, drawing variously on the Eagles, Laura Ingalls Wilder, James Baldwin, Alexander Graham Bell, Joan Didion, religious pamphlets, and reality television shows. These spare, sometimes lyric essays explore the legacy of race in America, artfully revealing in intimate detail how families, schools, and neighborhoods participate in preserving racial privilege.  Faced with a disturbing past and an unsettling present, Biss still remains hopeful about the possibilities of American diversity, “not the sun-shininess of it, or the quota-making politics of it, but the real complexity of it.”

“Eula Biss writes in spare brushstrokes that evoke an emotional universe, by turns funny, scary, dreamlike, haunting. These prose poems are shards of gleaming observation, fragments of intimacy and illusion. Here we find our families and ourselves, our words and our silences” —Martin Espada.

“With deceptively quiet, unflinching compassion, Eula Biss records the perceptual wedges that cleave the self from its origins. The family history refracted here is mutable, notable, more gravid than grave. The Balloonists holds a fresh line on confession, biography, and the formal uses of information in poetry” —Rebecca Wolff.

FEAR, RACISM, AND THE HISTORICALLY TROUBLING ATTITUDE OF AMERICAN PIONEERS

“What is it about water that always affects a person?” Laura Ingalls Wilder wrote in her 1894 diary. “I never see a great river or lake but I think how I would like to see a world made and watch it through all its changes.”

Forty years later, she would reflect that she had “seen the whole frontier, the woods, the Indian country of the great plains, the frontier towns, the building of the railroads in wild unsettled country, homesteading and farmers coming in to take possession.” She realized, she said, that she “had seen and lived it all….”

It was a world made and unmade. And it was not without some ambivalence, not without some sense of loss, that the writer watched the Indians, as many as she could see in either direction, ride out of the Kansas of her imagination. Her fictional self, the Laura of Little House on the Prairie, sobbed as they left.

Like my sister, like my cousin, like so many other girls, I was captivated, in my childhood, by that Laura. I was given a bonnet, and I wore it earnestly for quite some time. But when I return to Little House on the Prairie now as an adult, I find that it is not the book I thought it was. It is not the gauzy frontier fantasy I made of it as a child. It is not a naïve celebration of the American pioneer. It is the document of a woman interrogating her legacy. It is, as the scholar Ann Romines has called it, “one of our most disturbing and ambitious narratives about failures and experiments of acculturation in the American West.”

In that place and time where one world was ending and another was beginning, in that borderland between conflicting claims, the fictional Laura, the child of the frontier, struggles through her story. She hides, she cowers, she rages, she cries. She asks, “Will the government make these Indians go west?” and she asks, “Won’t it make the Indians mad to have to—” but then she is cut off and told to go to sleep. She falls ill and wakes from a fever to find a black doctor attending her. She picks up beads at an abandoned Indian camp and strings them for her sister. The real Laura grows up riding back and forth in covered wagons across the Middle West, passing through immigrant towns and towns where she notes in her diary seeing “a great many colored people.” She marries a farmer named Almanzo and settles, finally, in the Ozarks.

Laura Ingalls Wilder loved the land enough to know exactly what had been stolen to make her world. “If I had been the Indians,” she wrote in her 1894 diary, as she looked out over a river and some bluffs in South Dakota, “I would have scalped more white folks before I ever would have left it.” Read more…

• Where Do Vaccination Fears Come From? Bill Gates praises On Immunity  — GatesNotes

• Interview about On Immunity: An Inoculation — Harper’s

• A Talk with Eula Biss about On Immunity — Bookforum

• Read an Excerpt from Notes on No Man’s Land: An American Essay — The Believer

• Interview about On Immunity — The Rumpus

• Eula Biss on the Myth and Medicine of Immunity — MPR News