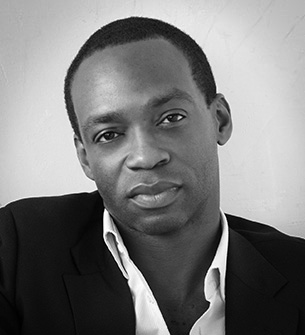 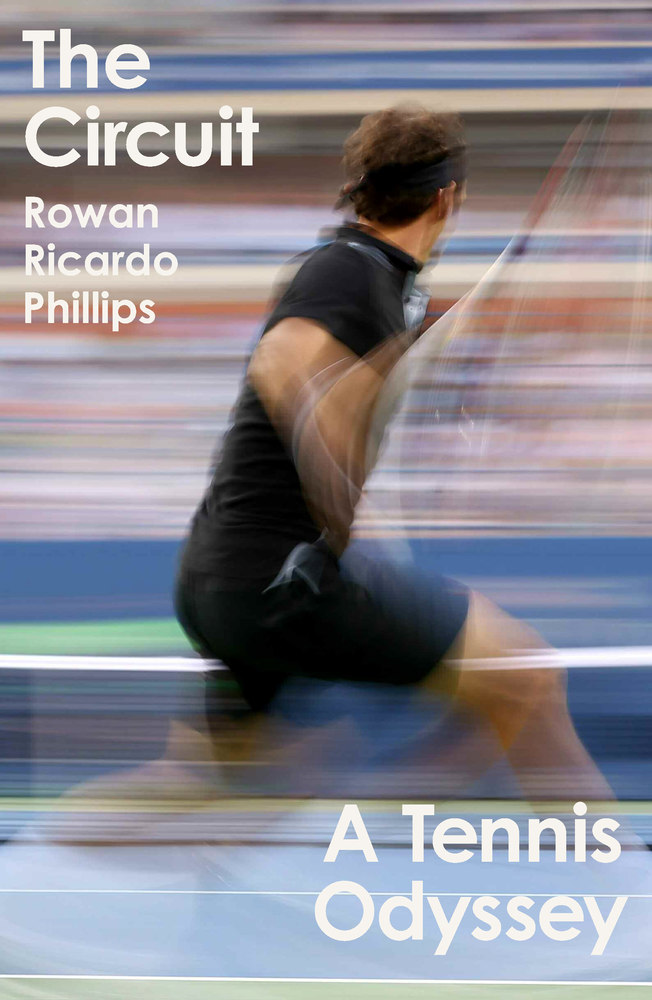 “No matter where he goes, Phillips’ language is hauntingly astute, and the reality he conjures is multi-layered.” ―The Washington Post

“The ground Phillips treads is a middle ground—between spirit and flesh, heaven and earth, here and gone. His images are evanescent, twilit, smoke-obscured.” —New York Times

Rowan Ricardo Phillips is a multi-award-winning poet, author, screenwriter, academic, translator, and journalist. His writing appears in The New York Times, The New Yorker, The Paris Review, and other national and international publications.

The author of three books of poetry, a book of literary criticism, a non-fiction book on tennis, and a book-length translation of fiction, Rowan Ricardo Phillips has been awarded the Nicolás Guillén Outstanding Book Award, the Anisfield-Wolf Book Award, a Guggenheim Fellowship, the PEN/ESPN Award for Literary Sportswriting, the PEN/Joyce Osterweil Award for Poetry, a Whiting Award, and the GLCA New Writers Award. He has also been a finalist for the Griffin International Poetry Prize, the National Book Award, and the Los Angeles Times Book Prize.

Also an acclaimed sportswriter, Rowan’s writing on basketball has been collected by The Library of America, his soccer writing has been acclaimed by BBC commentary and English soccer legend Gary Lineker, and his award-winning writing on tennis has achieved widespread international recognition.

Rowan has written the screenplay for Legendary’s biopic on baseball icon Roberto Clemente adapted from Pulitzer Prize winner David Maraniss’ biography Clemente: The Passion and PRide of Baseball’s Last Hero, which will be directed by O. J.: Made in America creator Ezra Edelman and produced by John Lesher, Fuego Films’ Ben Silverman and Jay Weisleder, with Giselle Fernandez and Sandra Condito as executive producers. His work has also been heard on the small screen: his poetry has been adapted for music and subsequently appeared on Spike Lee’s Netflix series She’s Gotta Have It.

Rowan Ricardo Phillips is a graduate of Swarthmore College and has a doctorate in English Literature from Brown University. He is a Professor of English at Stony Brook University, a member of the faculty of Creative Writing at Princeton University, and has recently been named the W. Ford Schumann Distinguished Visiting Professor in Democratic Studies at Williams College and divides his time between there, New York City, and Barcelona with his wife and two daughters.

Rowan Ricardo Phillips is a multi-award winning poet, nonfiction writer, scholar, screenwriter, and translator. He is the author of The Ground, Heaven, Living Weapon, When Blackness Rhymes with Blackness, and The Circuit: A Tennis Odyssey. Phillips has been the recipient of a Whiting Writers’ Award, a Guggenheim Fellowship, the Nicolás Guillén Outstanding Book Award, the PEN/Osterweil Prize for Poetry, the Anisfield-Wolf Book Award, and the GLCA New Writers Award, and the PEN/ESPN Award for Literary Sportswriting. He lives in New York City and Barcelona.

A revelation, a shoring up, a transposition: Rowan Ricardo Phillips’s Living Weapon is a love song to the imagination, a new blade of light honed in on our political moment. A winged man plummets from the troposphere; four NYPD officers enter a cellphone store; concrete sidewalks hang overhead. Here, in his third collection of poems, Phillips offers us ruminations on violins and violence, on hatred, on turning forty-three, even on the end of existence itself. Living Weapon reveals to us the limitations of our vocabulary, that our platitudes are not enough for the brutal times in which we find ourselves. But still, our lives go on, and these are poems of survival as much as they are an indictment. Couched in language both wry and ample, Living Weapon is a piercing addition from a “virtuoso poetic voice”.

“As sports writing goes, The Circuit is unusual in the very best way. Rowan Ricardo Phillips writes with such fluidity, and packs the book with bursts of brilliance. This is a compulsively readable guide to one truly Homeric year of professional tennis.” —John Green

An energetic, lyrical, genre-defying account of the 2017 tennis season. In The Circuit: A Tennis Odyssey, the award-winning poet—and Paris Review sports columnist—Rowan Ricardo Phillips chronicles 2017 as seen through the unique prism of its pivotal, revelatory, and historic tennis season. The annual tennis schedule is a rarity in professional sports in that it encapsulates the calendar year. And like the year, it’s divided into four seasons, each marked by a final tournament: the Grand Slams. Phillips charts the year from winter’s Australian Open, where Roger Federer and Rafael Nadal renewed their rivalry in a match for the ages, to fall’s U.S. Open. Along the way, Phillips paints a new, vibrant portrait of tennis, one that captures not only the emotions, nerves, and ruthless tactics of the point-by-point game but also the quicksilver movement of victory and defeat on the tour, placing that sense of upheaval within a broader cultural and social context. Tennis has long been thought of as an escapist spectacle: a bucolic, separate bauble of life. The Circuit will convince you that you don’t leave the world behind as you watch tennis—you bring it with you. 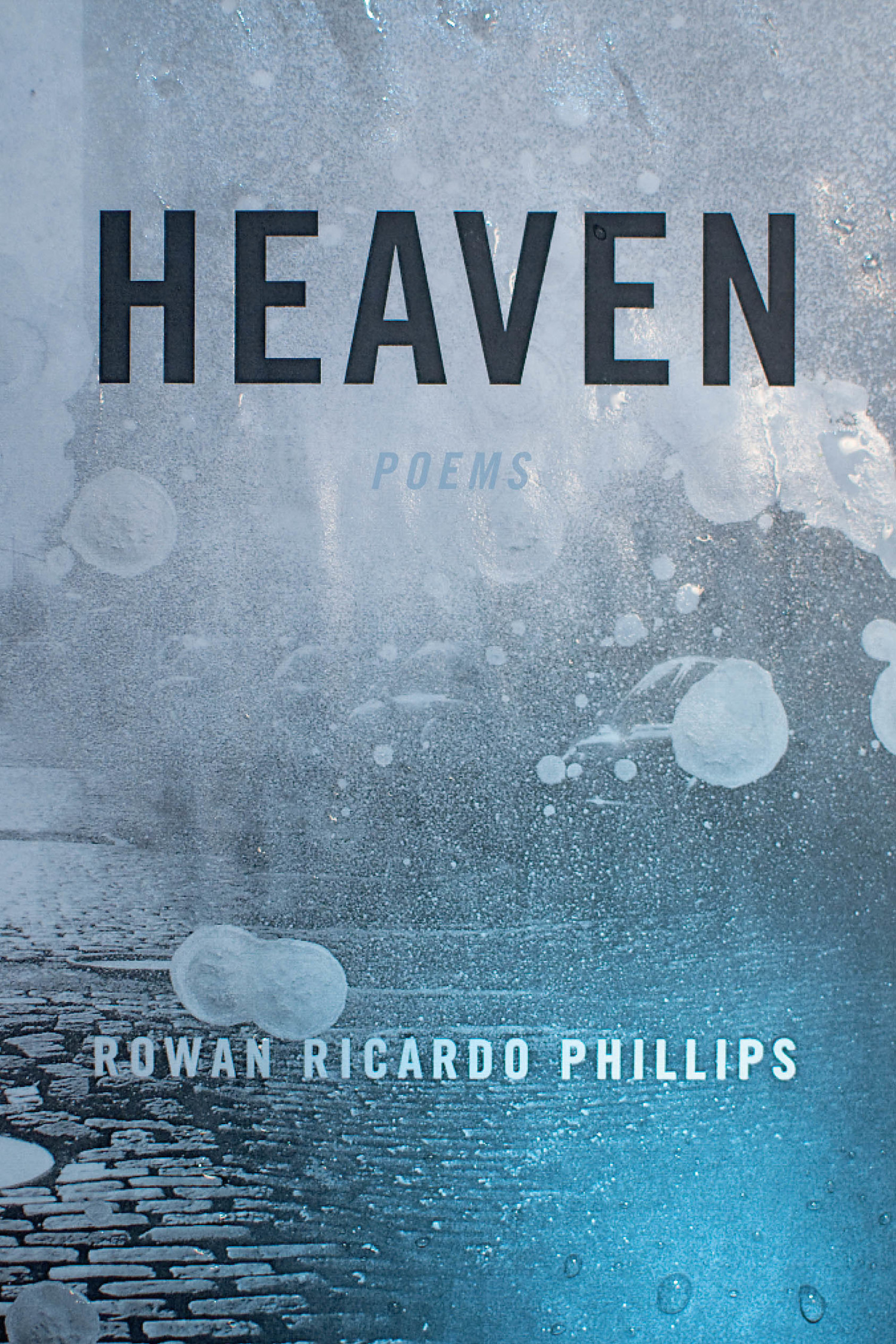 “Who the hell’s heaven is this?” Rowan Ricardo Phillips offers many answers, and none at all, in Heaven, the piercing and revelatory encore to his award-winning debut, The Ground. Swerving elegantly from humor to heartbreak, from Colorado to Florida, from Dante’s Paradise to Homer’s Illiad, from knowledge to ignorance to awe, Phillips turns his gaze upward and outward, probing and upending notions of the beyond. “Feeling, real feeling / with all its faulty / Architecture, is / Beyond a god’s touché”—but it does not elude Phillips. Meditating on feverish boyhood, on two paintings by Chuck Close, on Shakespeare’s Measure for Measure, on a dead rooster by the side of the road in Ohio, on an elk grazing outside his window, his language remains eternally intoxicating, full of play, pathos, and surprise. “The end,” he writes, “like / All I’ve ever told you, is uncertain.” Or, elsewhere: “The only way then to know a truth / Is to squint in its direction and poke.” Phillips—who received a 2013 Whiting Writers’ Award as well as the PEN / Joyce Osterweil Award—may not be certain, but as he squints and pokes in the direction of truth, his power of perception and elegance of expression create a place where beauty and truth come together and drift apart like a planet orbiting its star. The result is a book whose lush and wounding beauty will leave its mark on readers long after they’ve turned the last page. 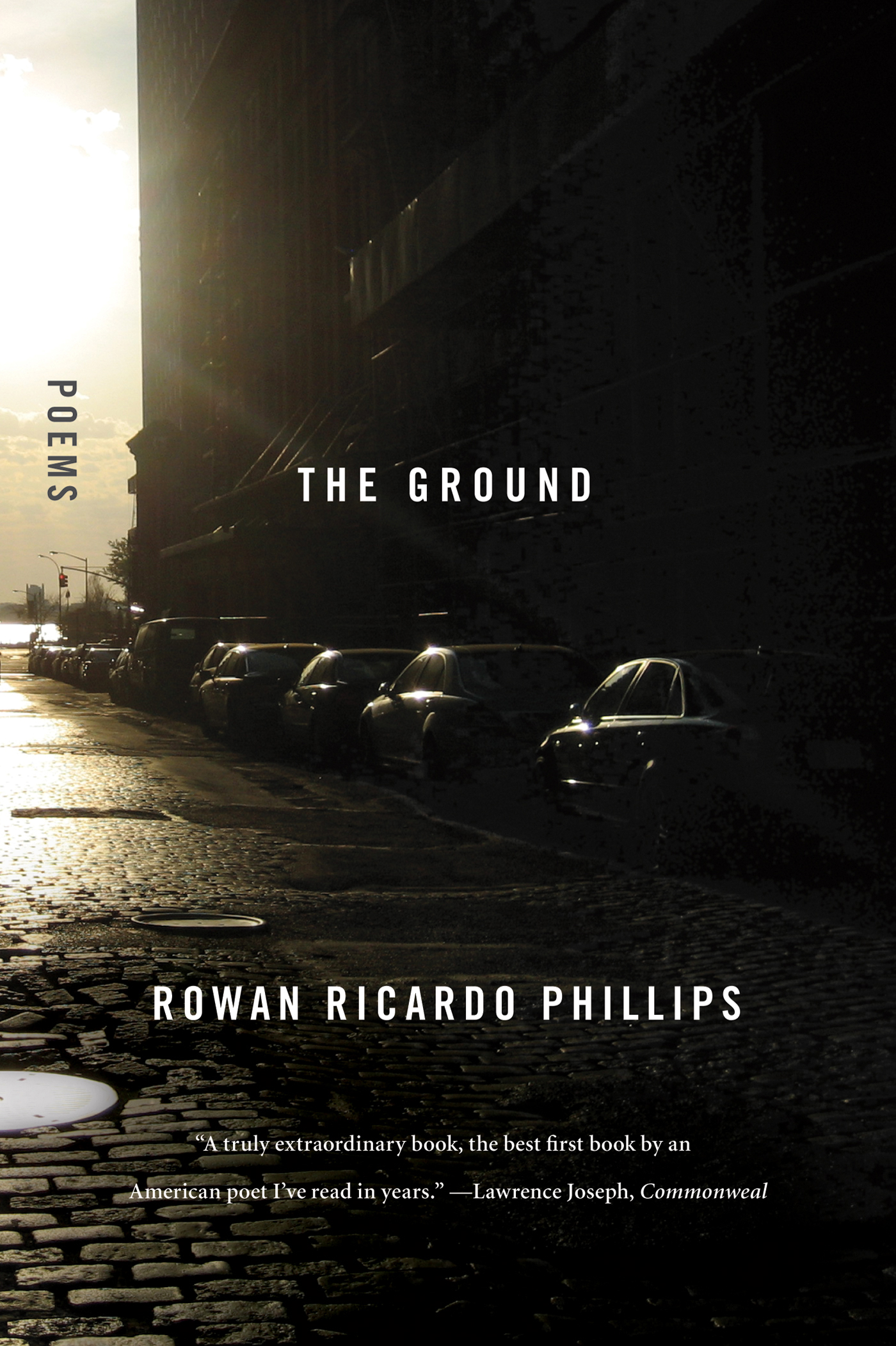 “From New York in the often surreal aftermath of 9/11, to the deep underworlds of ancient mythology, to the trans-continental heritage and childhood of Phillips himself, these are poems with a restless agility that make the terrain beneath your feet more mysterious.” — Granta

A poignant and terse vision of New York City unfolds in Rowan Ricardo Phillips’s debut book of poetry. A work of rare beauty and grace, The Ground is an entire world, drawn and revealed through contemplation of the post-9/11 landscape. With musicality and precision of thought, Phillips’s poems limn the troubadour’s journey in an increasingly surreal modern world (“I plugged my poem into a manhole cover / That flamed into the first guitar”). The origin of mankind, the origin of the self, the self’s development in the sensuous world, and—in both a literal and a figurative sense—the end of all things sing through Phillips’s supple and idiosyncratic poems. The poet’s subtle formal sophistication—somewhere between flair and restraint—and sense of lyric possibility bring together the hard glint of the contemporary world and the eroded permanence of the archaic one through remixes, underground sessions, Spenserian stanzas, myths, and revamped translations. These are poems of fiery intelligence, inescapable music, and metaphysical splendor that concern themselves with lived life and the life of the imagination—both equally vivid and true—as they lay the framework for Phillips’s meditations on our connection to and estrangement from the natural world. 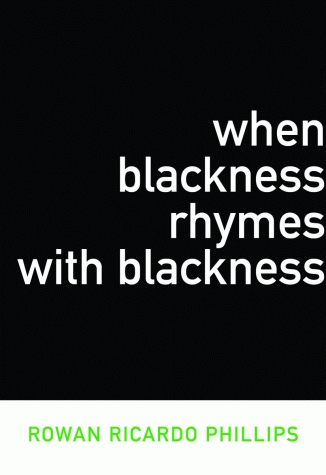 When Blackness Rhymes with Blackness

• The Best Recent Poetry – The Guardian

• A Poet With His Eyes on Politics – New York Times

• A Book That Honors an Underrated Sport — The Atlantic

• Black Male Writers for Our Time — The New York Times

• Review of The Ground — Commonweal

• Read an excerpt from The Circuit – The Paris Review

Right at the part where the Duke delivers

His Old Testament decision of haste

Paying for haste, and leisure answering

Measure for measure. I saw it performed

Once, in Stratford; I was maybe twenty.

I only remembered the “measure still

For measure” part, until now. It stuck

With me. But the rest of it was wiped clean

From my memory; all of Stratford, too.

Still, the way the actor leaned on that half

Line, “measure still for measure,” as though it

Were the measure of his self, measure still

For measure, all these years, I remembered

Being the heart of the play, its great gist;

But I forgot it was a death sentence.

Whether Angelo deserved such a fate,

Or Isabella’s ability to

Rise above the mire doesn’t matter:

Death, not beauty, woke me.

All of Shakespeare feels like lead on my chest,

Not for death, let’s face it, death awaits us,

But death measures us with a noun’s contempt

For our imagination, being death

Turn from the Bard, look outside and behold

A herd of a hundred elk, surviving

The snow as they know how—being elk.

An hour ago they were in the hills,

But now they graze a mere five feet away,

Their world othered by these austere windows;

To prevent his thick neck from crashing down,

Hoofs the snow and starts towards me, but then turns

To compass the valley between his horns.

We’d cut school like knives through butter, the three

Just about all the music we knew,

Which meant that from nine in the morning till

Would get home from work, I played guitar,

Up becoming a guitarist by trade

When we went separate ways, to separate

Schools, in separate states) Steve at this point

Played the drums. We dreamed of power trios

And powered our way through song after song,

Including ones Steve and I wrote­­—like

“Hey, Regina” and the lamentably-

Titled “String Her Up.” Sometimes we tried out

Some Yes, a long “Hey Joe,” the stereo phaser

Was my signature sound, and I’d bend in

And out of notes, imply arpeggios

Only to solo over them, tapped, frowned

Through anything in a major key, felt

My way home on Steve’s map of snares, Pete’s rope.

Usually the first or second, then stray

By chance into the longer, later songs

Like bees that float down and drown in a pool.

We’d break for lunch and then get back at it

As though we had a gig to get ready for,

Or a demo to cut, the cassette deck

Rolling its eyes as it whirred round and round.

Peter, as is the nature of bassists,

Held the tunes together and kept things light.

Years later, I assumed he was dead.

My telecaster glares at me at night now

From inside the hard case by my bed—

And the calluses on my fingertips

Have long since softened. The six-minute solos

At some point became poems it took two months

In the meantime thrived in the Triangle,

Cheerfully about the Light, the Great Light

That glows in all of us, sends the occasional

A sun resting on a cloud like a pearl

Me. I’m nearing forty, we were boys—

And I should let us be. But nostalgia

Spreads quickly through the ashes of our youth,

When the dark would come, we’d show each other 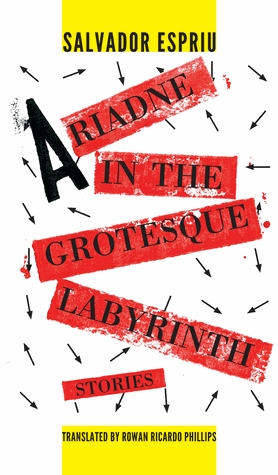 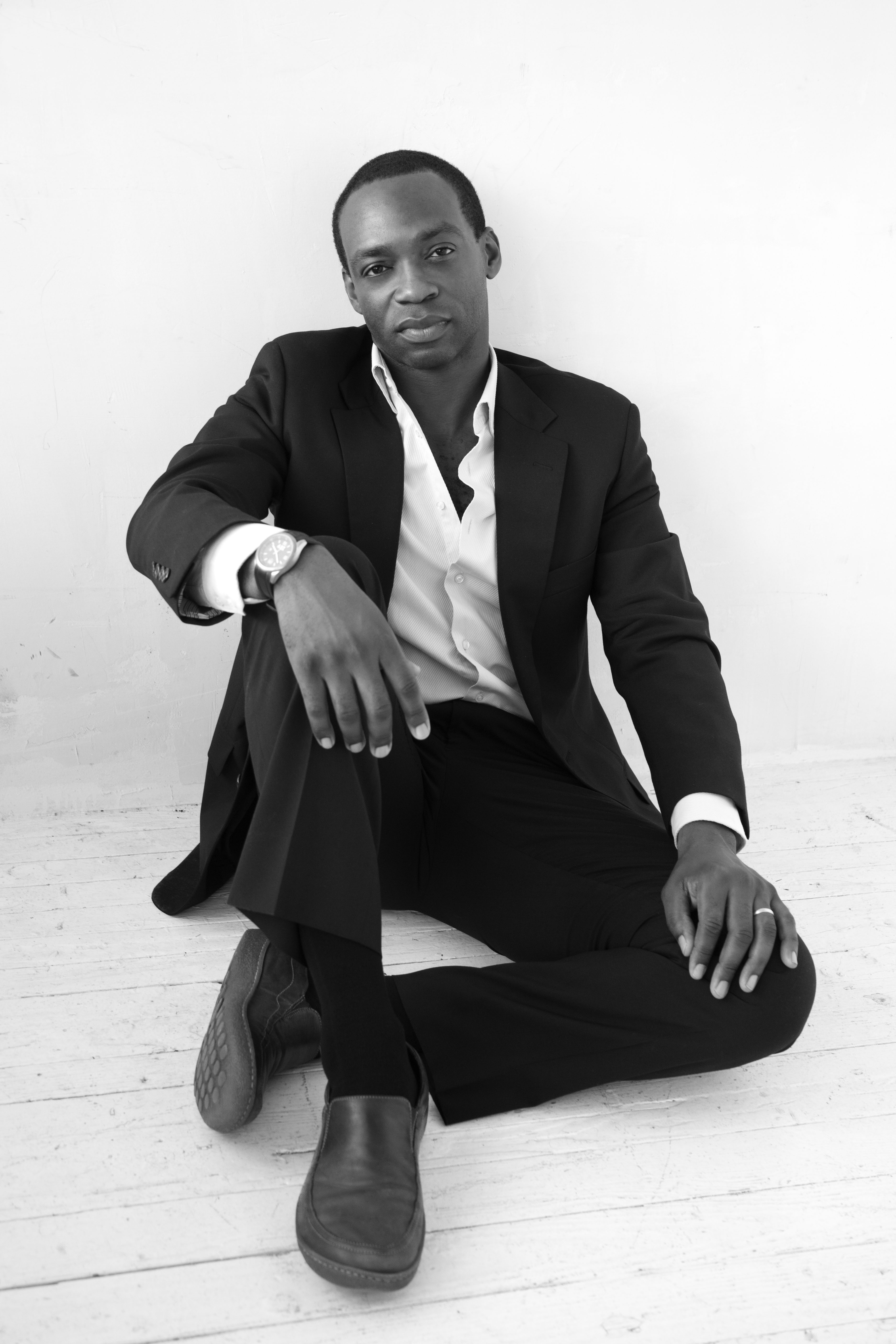