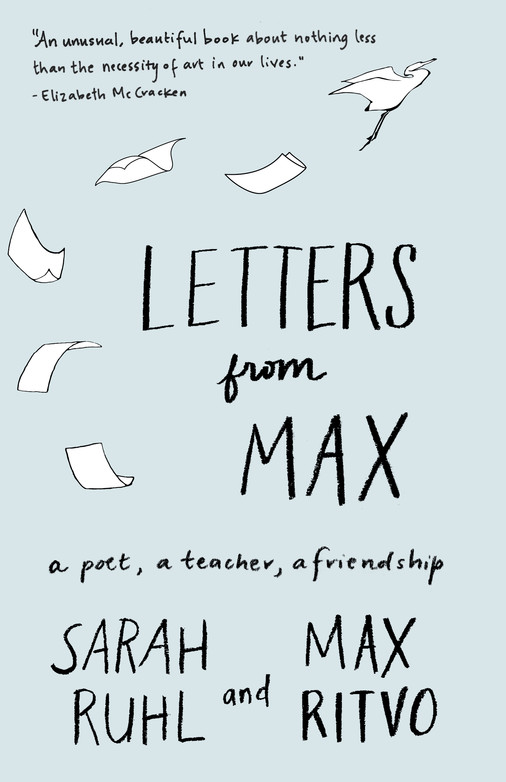 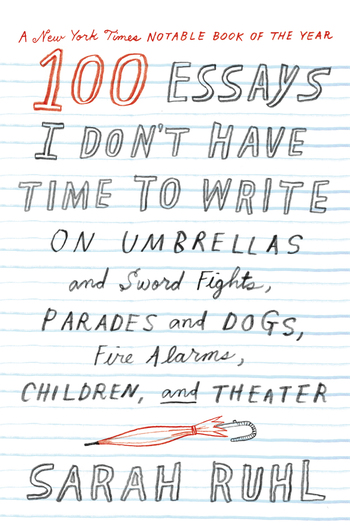 “Ruhl writes in a poised, crystalline style about things that are irrational and invisible. Ruhl is a fabulist. Her plays celebrate what she calls ‘the pleasure of heightened things.’”―The New Yorker

“Ruhl uses her experience as a playwright to make us think anew about what we half-consciously know. She has found the time to ask the right questions; it’s up to us to make time to think about her—and our—answers.” —The New York Times

Sarah Ruhl is a poet, essayist and prolific playwright whose adventurous theatrical works juxtapose the mundane aspects of daily life with mythic themes of love and war. Ruhl is a MacArthur “Genius” Award recipient, two-time Pulitzer Prize finalist, and Tony Award nominee. Her first poetry collection, 44 Poems For You, is forthcoming from Copper Canyon Press in February 2020.

Ruhl’s 100 Essays I Don’t Have Time to Write (Farrar, Strauss & Giroux, 2014), which was a New York Times Notable Book of the Year, shares artful meditations on life in the arts and joyous jumbles of observations on everything in between. Letters from Max (Milkweed Editions, 2018), co-authored with the late poet Max Ritvo, was on the New Yorker’s best poetry of the year list. It is a deeply moving portrait of a friendship and a shimmering exploration of love, art, mortality, and the afterlife. Ruhl’s plays include Stage Kiss; In the Next Room, or the vibrator play (Pulitzer Prize finalist, 2010; Tony Award nominee for best new play); The Clean House (Pulitzer Prize Finalist, 2005; The Susan Smith Blackburn Prize, (2004); Passion Play (PEN American award; The Kennedy Center’s Fourth Freedom Forum Playwriting Award); Dead Man’s Cell Phone (Helen Hayes award); The Oldest Boy and most recently, For Peter Pan on her 70th Birthday and How To Transcend A Happy Marriage. Ruhl’s works have been produced on Broadway and around the United States, as well as internationally, and have been translated into over twelve languages. Eurydice will open the Metropolitan Opera’s 2021-22 season.

“I try to interpret how people subjectively experience life,” Ruhl has said. “Everyone has a great, horrible opera inside him. I feel that my plays, in a way, are very old-fashioned. They’re pre-Freudian in the sense that the Greeks and Shakespeare worked with similar assumptions. Catharsis isn’t a wound being excavated from childhood.”

The Clean House (2004) won the Susan Smith Blackburn Prize in 2004 and was a Pulitzer Prize finalist in 2005. As Ruhl has said, “The play takes place in a ‘metaphysical Connecticut’ where married doctors employ a Brazilian housekeeper who is more interested in coming up with the perfect joke than in cleaning. Trouble erupts when the husband falls in love with one of his cancer patients.”

Originally from Chicago, Ruhl received her M.F.A. from Brown University where she studied with Paula Vogel, and is an alumna of 13P and of New Dramatists. She has received the Susan Smith Blackburn Award, the Whiting Award, the Lily Award, a PEN award for mid-career playwrights, the National Theater Conference’s Person of the Year Award, and the Steinberg Distinguished Playwright Award. Ruhl lives with her family in Brooklyn, NY and teaches at the Yale School of Drama.

Sarah Ruhl is a poet, essayist and prolific playwright. She has been awarded the MacArthur “Genius” Award, is a two-time Pulitzer Prize finalist, and a Tony Award nominee. Ruhl’s theatrical works have been produced on Broadway, around the United States, and internationally and have been translated into over twelve languages. In her poetry and essays, Ruhl meditates on themes of love, family, motherhood, art, mortality, and the afterlife. Originally from Chicago, Ruhl received her M.F.A. from Brown University where she studied with Paula Vogel, and is an alumna of 13P and of New Dramatists. Ruhl lives with her family in Brooklyn, NY and teaches at the Yale School of Drama.

LETTERS FROM MAX: A POET, A TEACHER, A FRIENDSHIP (Nonfiction, 2018)

“Moving and erudite . . . devastating and lyrical . . . Ruhl draws a comparison between their correspondence and that between poets Robert Lowell and Elizabeth Bishop, and indeed, with the depth and intelligence displayed, one feels in the presence of literary titans.” ― Publishers Weekly

Studded with poems and songs, Letters from Max is a deeply moving portrait of a friendship, and a shimmering exploration of love, art, mortality, and the afterlife. In 2012, Sarah Ruhl was a distinguished author and playwright, twice a finalist for the Pulitzer Prize. Max Ritvo, a student in her playwriting class at Yale University, was an exuberant, opinionated, and highly gifted poet. He was also in remission from pediatric cancer. Over the next four years—in which Ritvo’s illness returned and his health declined, even as his productivity bloomed—the two exchanged letters that spark with urgency, humor, and the desire for connection. Reincarnation, books, the afterlife as an Amtrak quiet car, good soup: in Ruhl and Ritvo’s exchanges, all ideas are fair, nourishing game, shared and debated in a spirit of generosity and love.

FOR PETER PAN ON HER 70TH BIRTHDAY (Play, 2018)
When Ann thinks of her father, she immediately remembers playing Peter Pan in her hometown theater in Iowa, particularly when he used to bring her flowers after her performance. Her memory is jogged by the fact that she and her four siblings are in their father’s hospital room during his final moments. His death sparks a conversational wake that includes everything from arguments over politics to when each sibling realized that they grew up. A loving look at a family’s view of death, life, and the allure of never growing up.

100 ESSAYS I DON’T HAVE TIME TO WRITE: ON UMBRELLAS AND SWORD FIGHTS, PARADES AND DOGS, FIRE ALARMS, CHILDREN, AND THEATER (Nonfiction, 2014)

“100 Essays I Don’t Have Time to Write is in fact a work of profound moral organization . . . its deeper purpose is to define the artist’s relationship to truth and to demonstrate how, from within the correctness of the artistic process, life can be meaningfully understood . . . Ruhl has found the time to ask the right questions–it’s up to us to make the time to think about her–and our–answers.” —The New York Times Book Review

With titles as varied as “On lice,” “On sleeping in theaters,” and “Motherhood and stools (the furniture kind),” these essays are artful meditations on life in the arts and joyous jumbles of observations on everything in between. The pieces combine admonition, celebration, inquiry, jokes, assignments, entreaties, prayers, and advice: honest reflections distilled from years of working in the theater. They offer candid accounts of what it is like to be a mother and an artist, along with descriptions of how Ruhl’s children’s dreams, jokes, and songs work themselves into her writing. 100 Essays I Don’t Have Time to Write is not just a book about the theater. It is a map of a very particular artistic sensibility and a guide for anyone who has chosen an artist’s life.

“[This] breathtakingly inventive addition to Ruhl’s singular body of work has the potential to be a modern masterpiece.” – Los Angeles Times

In Eurydice, Sarah Ruhl reimagines the classic myth of Orpheus through the eyes of its heroine. Dying too young on her wedding day, Eurydice must journey to the underworld, where she reunites with her father and struggles to remember her lost love. With contemporary characters, ingenious plot twists, and breathtaking visual effects, the play is a fresh look at a timeless love story.

The play takes place in what the author describes as “metaphysical Connecticut,” mostly in the home of a married couple who are both doctors. They have hired a housekeeper named Matilde, an aspiring comedian from Brazil who’s more interested in coming up with the perfect joke than in house-cleaning. This theatrical and wildly funny play is a whimsical and poignant look at class, comedy and the true nature of love.

YOU KNOW what a lee is; I don’t.
Behind a stone. No wind. Stop boat. A place.
Behind your back. My body. Stop the air.
Travel by stopping, full stop, just there.

As lee is a small word. Sail easy.
Lee and unlee, light is hot.
Rest here, a while longer on my
belly. A lee, a dry derry, a drought.

• Read “An Introvert’s Guide to Friendship” — The New York Times

• The Other Self: Book Review of 100 Essays I Don’t Have Time To Write — The New York Times