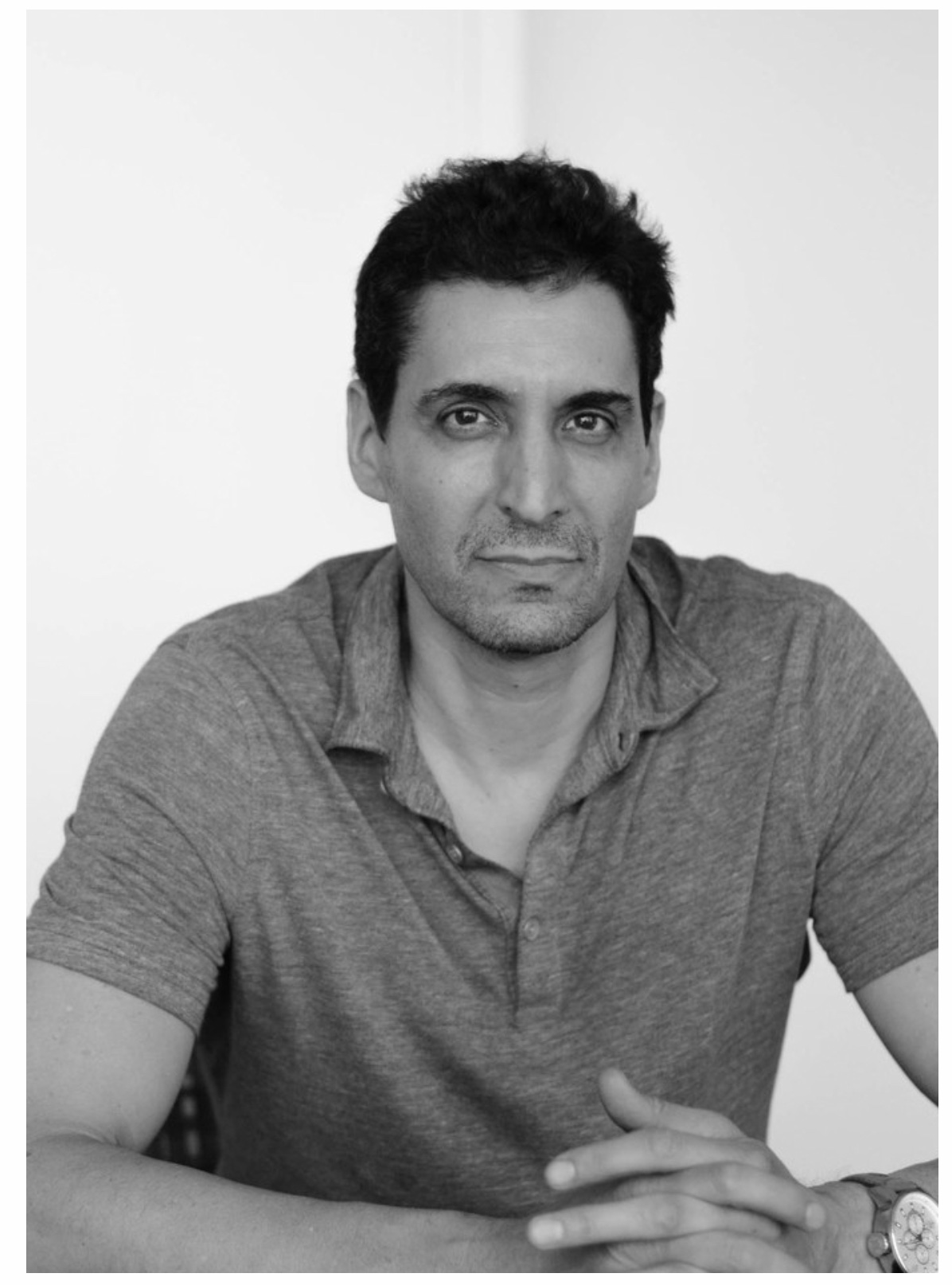 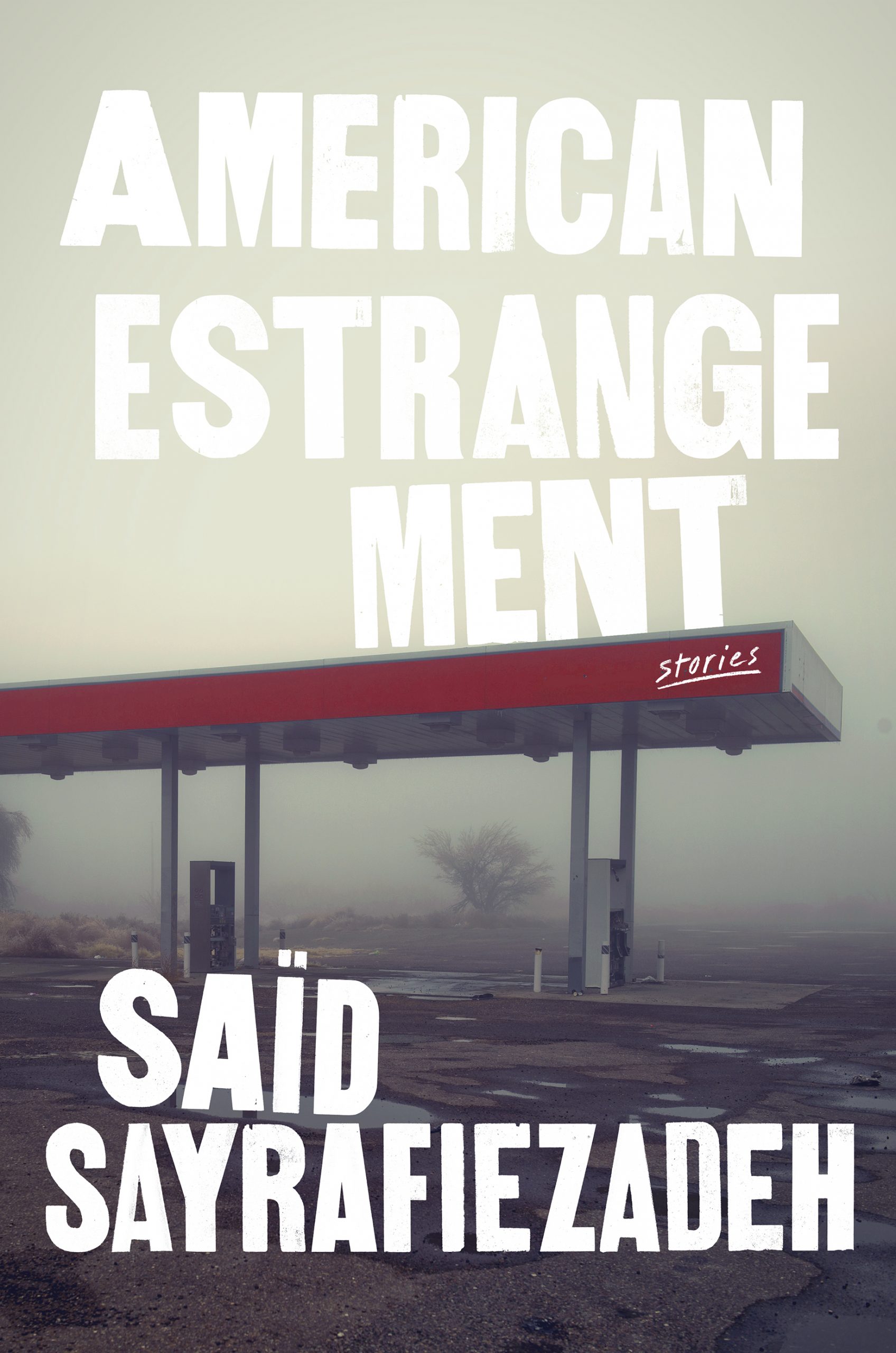 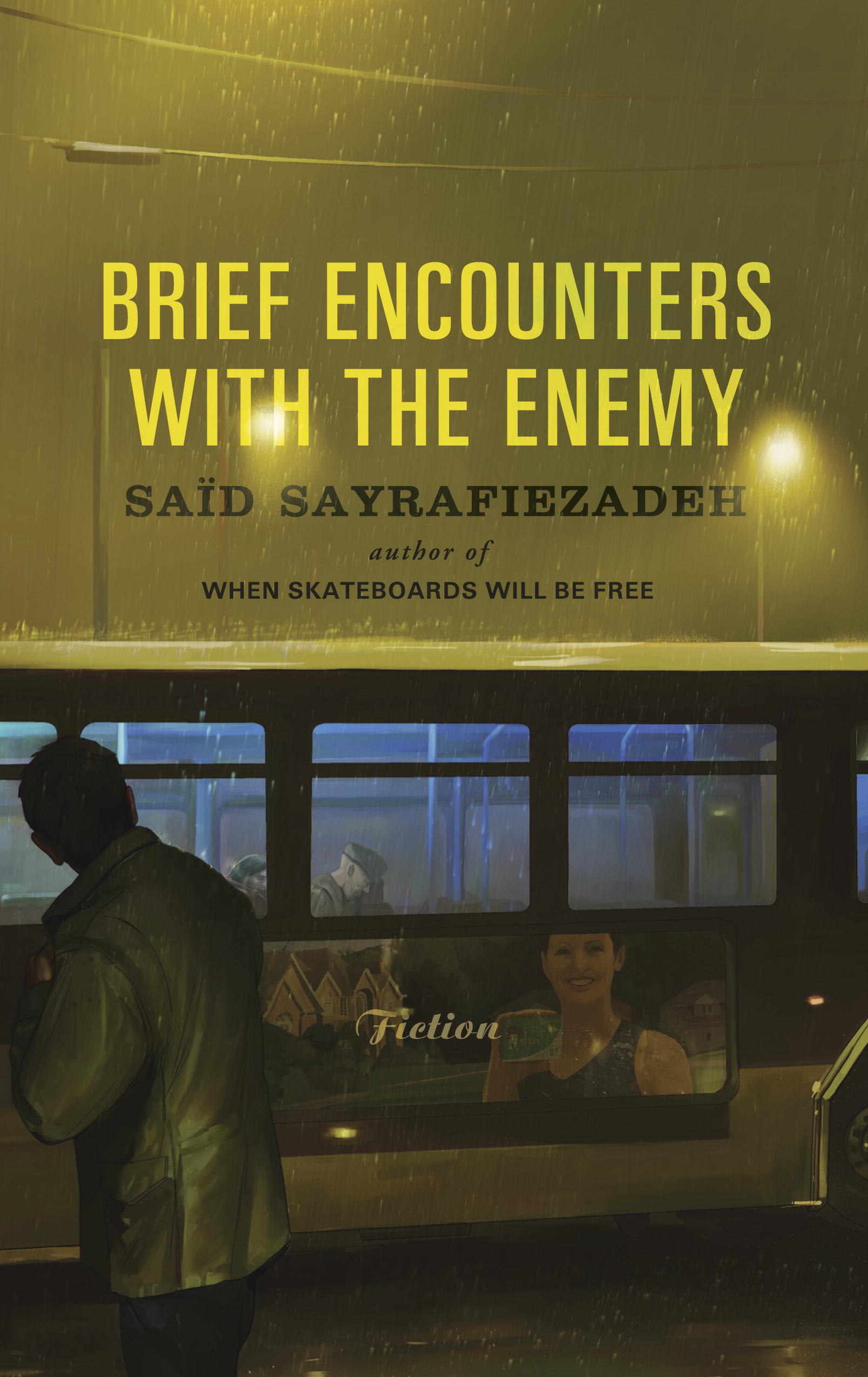 “With insightful humor and a keen eye for offbeat details, Sayrafiezadeh, entertaining and political without being heavy-handed, is a force to be reckoned with.” —Jonathan Fullmer

“Saïd Sayrafiezadeh is a slyly subversive absurdist whose true subject is the deeply serious matter of our obligations to one another as human beings.” —John Burnham Schwartz

“Saïd Sayrafiezadeh is a masterful storyteller, working from deep in the American grain.” —Philip Gourevitch

Saïd Sayrafiezadeh was born in Brooklyn and raised in Pittsburgh. Most recently, he is the author of the short story collection American Estrangement (W.W. Norton, 2021). He is also the author of the critically acclaimed memoir When Skateboards Will Be Free: A Memoir (2010), which won a Whiting Award and was selected as one of the ten best books of the year by Dwight Garner of The New York Times; and the short story collection, Brief Encounters With the Enemy (2014), which was shortlisted for the PEN/Robert W. Bingham Fiction Prize and named one of the best book of the year by BookPage. Sayrafiezadeh’s short stories and personal essays have appeared in The New Yorker, The Paris Review, Granta, McSweeney’s, The New York Times, Best American Nonrequired Reading, and numerous anthologies.

Steve Almond, reviewing Brief Encounters With the Enemy in the New York Times Book Review wrote: “In his beguiling 2009 memoir, When Skateboards Will Be Free, Saïd Sayrafiezadeh recounted being raised by devout members of the Socialist Workers Party. His Jewish mother did the actual raising; his Iranian-born father abandoned the family for the cause. Both believed a workers’ revolution was imminent. It was a childhood, Sayrafiezadeh observed, devoted to “a peculiar set of rules” that were both ethically impeccable and entirely at odds with the dominant culture . . . Brief Encounters With the Enemy, is a stark and unsettling vision of that dominant culture. The young men who narrate these eight stories evince little in the way of ideals, let alone idealism. They are wage slaves fueled by can-do aphorisms and ambitions—for a raise, for respect, for sex—as routine as their work schedules….In his memoir, Sayrafiezadeh told the remarkable tale of a childhood steeped in doomed dogma. His stories…offer something more: a searing vision of his wayward homeland, delivered not in the clamoring rhetoric of a revolutionary, but in the droll monologues of young men who kill because they lack the moral imagination to do otherwise.”

Sayrafiezadeh is the recipient of a 2010 Whiting Writers’ Award for nonfiction and a 2012 fiction fellowship from the Cullman Center for Scholars and Writers. Playwriting fellowships include New York Foundation for the Arts, New York Theatre Workshop and Sundance Theatre Lab. His play, “All Fall Away,” was produced in London at Theatre 503.

He lives in New York City and teaches creative writing at Hunter College and New York University, where he received a 2013 Outstanding Teaching Award.

Saïd Sayrafiezadeh is the author of Brief Encounters with the Enemy, which was shortlisted for the 2014 PEN/Robert W. Bingham Fiction Prize; the critically acclaimed memoir When Skateboards Will Be Free. Most recently, he is the author of the short story collection American Estrangement. His work has appeared in The New Yorker, The Paris Review, Granta, McSweeney’s, The New York Times and The Best American Nonrequired Reading, among other publications. He is the recipient of a 2010 Whiting Writers’ Award for nonfiction and a 2012 fiction fellowship from the Cullman Center for Scholars and Writers. Playwriting fellowships include New York Foundation for the Arts, New York Theatre Workshop and Sundance Theatre Lab. His play, “All Fall Away,” was produced in London at Theatre 503. He lives in New York City and teaches creative writing at Hunter College and New York University, where he received a 2013 Outstanding Teaching Award.

Said Sayrafiezadeh has been hailed by Philip Gourevitch as “a masterful storyteller working from deep in the American grain.” His new collection of stories―some of which have appeared in The New Yorker, the Paris Review, and The Best American Short Stories―are set in a contemporary America full of the kind of emotionally bruised characters familiar to readers of Denis Johnson and George Saunders. These are people contending with internal struggles―a son’s fractured relationship with his father, the death of a mother, the loss of a job, drug addiction―even as they are battered by larger, often invisible, economic and political forces of American society. Searing, intimate, often slyly funny, and always marked by a deep imaginative sympathy, American Estrangement is a testament to our addled times. It will cement Sayrafiezadeh’s reputation as one of the essential twenty-first-century American writers.

Brief Encounters with the Enemy

“With impressive guile and design, Mr. Sayrafiezadeh uses the arrival and escalation of that war as the through-line connecting each personal drama. . . . These calculated echoes work to unify [his] haunting book in a way that story collections rarely manage.” —The Wall Street Journal

When The New Yorker published a short story by Saïd Sayrafiezadeh in 2010, it marked the emergence of a startling new voice in fiction. In this astonishing book—shortlisted for the PEN/Robert W. Bingham Fiction Prize and named one of the best books of the year but BookPage—Sayrafiezadeh conjures up a nameless American city and its unmoored denizens: a call-center employee jealous of the attention lavished on a co-worker newly returned from a foreign war; a history teacher dealing with a classroom of maliciously indifferent students; a grocery store janitor caught up in a romantic relationship with a kleptomaniac customer. These men’s struggles and fleeting triumphs—with women, with cruel bosses, with the morning commute—are transformed into storytelling that is both universally resonant and wonderfully strange. Sometimes the effect is hilarious, as when a would-be suitor tries to take his sheltered, religious date on a tunnel of love carnival ride. Other times it’s devastating, as in the unforgettable story that gives the book its title: A soldier on his last routine patrol on a deserted mountain path finally encounters “the enemy” he’s long sought a glimpse of. 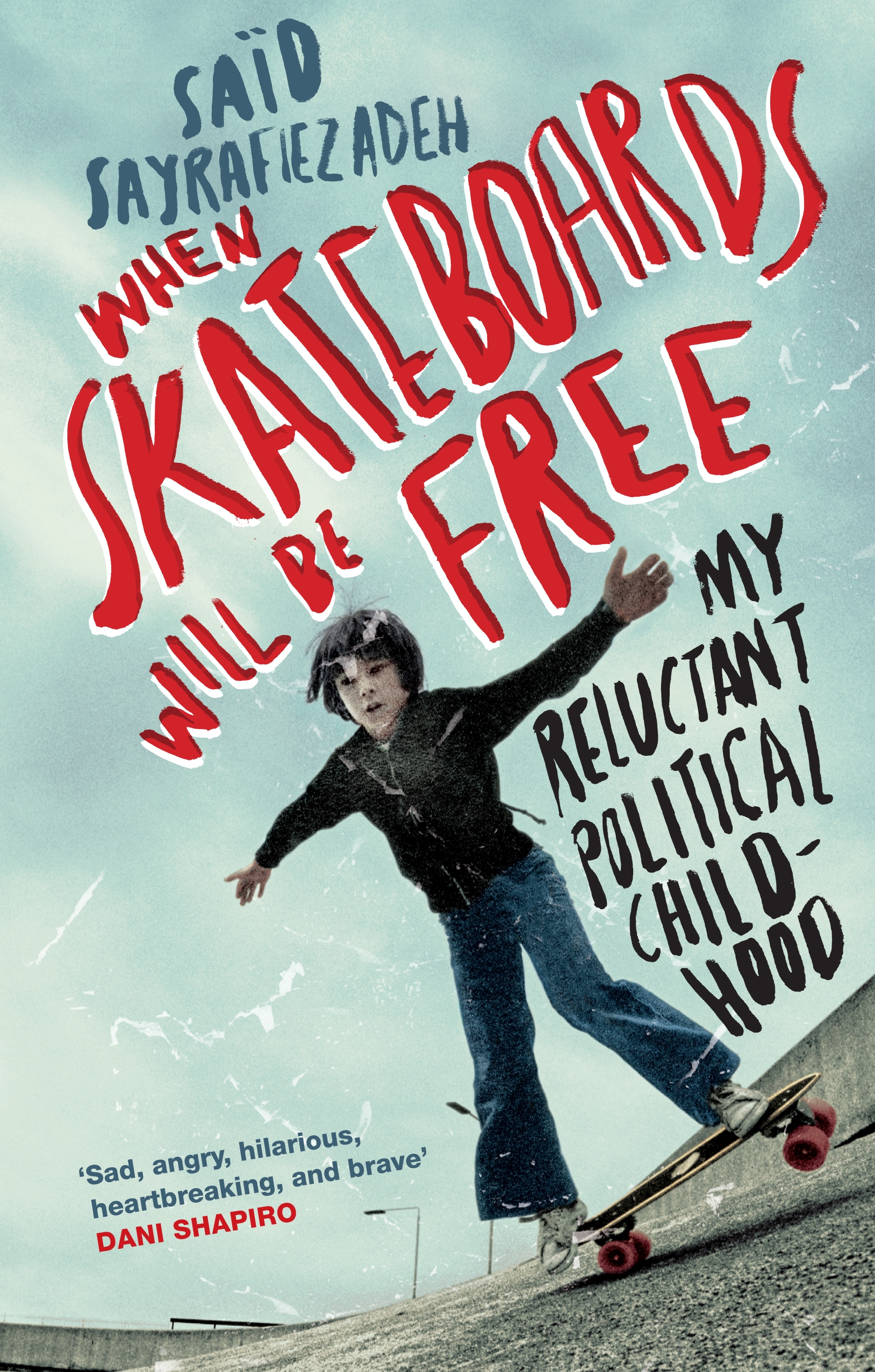 When Skateboards Will Be Free

“Saïd Sayrafiezadeh writes with extraordinary power and restraint…[His] prose has some of [Isaac Bashevis] Singer’s wistful comedy, and good deal of that writer’s curiosity about the places where desire, self-sacrifice and societal obligation intersect and collide.” —New York Times

“The revolution is not only inevitable, it is imminent. It is not only imminent, it is quite imminent. And when the time comes, my father will lead it.” With a profound gift for capturing the absurd in life, and a deadpan wisdom that comes from surviving a surreal childhood in the Socialist Workers Party, Saïd Sayrafiezadeh has crafted an unsentimental, funny, heartbreaking memoir. Saïd’s Iranian-born father and American Jewish mother had one thing in common: their unshakable conviction that the workers’ revolution was coming. Separated since their son was nine months old, they each pursued a dream of the perfect socialist society. Pinballing with his mother between makeshift Pittsburgh apartments, falling asleep at party meetings, longing for the luxuries he’s taught to despise, Said waits for the revolution that never, ever arrives. “Soon,” his mother assures him, while his long-absent father quixotically runs as a socialist candidate for president in an Iran about to fall under the ayatollahs. Then comes the hostage crisis. The uproar that follows is the first time Saïd hears the word “Iran” in school. There he is suddenly forced to confront the combustible stew of his identity: as an American, an Iranian, a Jew, a socialist… and a middle-school kid who loves football and video games. Poised perfectly between tragedy and farce, here is a story by a brilliant young writer struggling to break away from the powerful mythologies of his upbringing and create a life—and a voice—of his own. Saïd Sayrafiezadeh’s memoir is unforgettable.

• Saïd Sayrafiezadeh on the Performance of Fiction – The Atlantic

• How to Write About Trauma by Said Sayrafiezadeh – New York Times

• Five Qs with Said Sayrafiezadeh — Writing Like an Asian

• Review of Brief Encounters With the Enemy — Boston Globe

• Review of When Skateboards Will Be Free — New York Times

• Saïd Reading from Brief Encounters With the Enemy — PEN America

• Read “A Substitution” – The Atlantic

The winter the bus drivers went on strike I was twenty-three years old and living on the edge of the city in a neighborhood that was on the verge of becoming a ghetto. The parks had closed, and so had the supermarket, and also the elementary school, and every night the streetlights appeared to have gotten dimmer. The easiest way into and out of the neighborhood was by crossing through an underpass, but everyone had stopped using that. Instead, we took the long way up the hill and over the thoroughfare that ran six lanes. It was no longer a surprise to pick up the morning newspaper and learn that there had been yet another regrettable occurrence in the neighborhood the previous day. In the middle of the night, I would be jolted out of my dreams sometimes by the sound of police sirens or fire engines or car alarms or once even the voice of a man, just beneath my bedroom window, cooing submissively, “Please take my wallet.”

—from Brief Encounters with the Enemy

My father believes that the United States is destined one day to be engulfed in a socialist revolution. All revolutions are bloody, he says, but this one will be the bloodiest of them all. The working class—which includes me—will at some point in the not-so-distant future decide to put down the tools of our trade, pour into the streets, beat the police into submission, take over the means of productions, and usher in a new epoch—the final epoch—of peace and equality. This revolution is not only inevitable, it is imminent. It is not only imminent, it is quite imminent. And when the time comes, my father will lead it.

—from When Skateboards Will Be Free 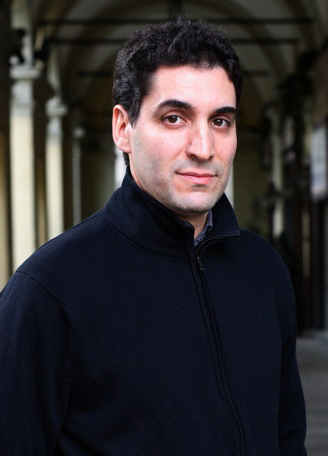 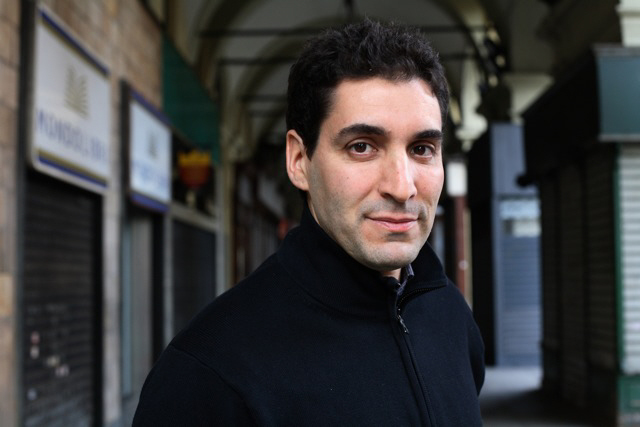 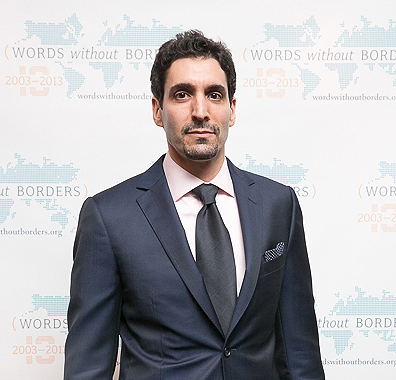 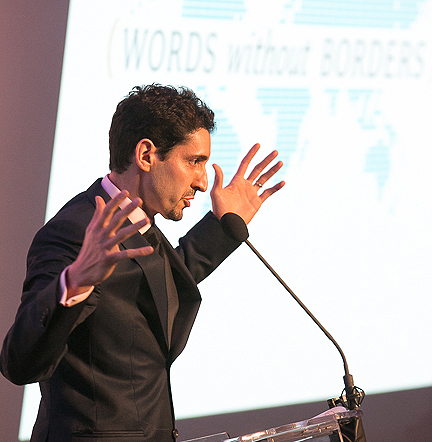