“Zurita’s sequence of poems—and they must be read as a sequence—creates as it explores a geography of earth, body, and soul, a syntax of pain and topology, an imagery of flesh and land painfully entwined, ultimately freed…. This is ground-breaking, mind-breaking, bone-breaking style; the miracle is that Zurita heals all by the end, wringing triumph out of anguish.” —Ronald Christ, president of PEN Mexico

“Chile’s tragic recent history provides the fire in which this…poet’s Dantean visions have been forged. The poetry that emerges is by turns cold, molten, scathing, and ultimately liberating—a remarkable thing.” —John Ashbery

“More than anything, Zurita emits warmth. As if there were honeysuckle under his skin.” —Jacket Magazine

Raúl Zurita, winner of the Chilean National Poetry Prize, is arguably the most powerful poetic voice in Latin America today. His compelling rhythms combine epic and lyric tones, public and intimate themes, grief and joy. Despite having been arrested and tortured under the Pinochet dictatorship, Zurita’s prevailing attitude in his Dantesque trilogy, Purgatoi (Purgatory), Anteparaí­so (Anteparadise), and La Vida Nueva (The New Life), is a deep love for everything and everybody in the world. His work is part of a revolution in poetic language that began in the 1970s and sought to find new forms of expression, radically different from those of Pablo Neruda. The challenge was to confront the contemporary epoch, with its particular forms of violence, including violence done to language.

His book, INRI (Marick Press, 2009, translated by William Rowe), is distinctive in that it does not speak out of individual sorrow—though this is not missing—but seeks, rather, a new space, out of which love might be asserted as prime human reality, a space which might give birth to a different type of society. Purgatory, translated by Anna Deeny, was published by The University of California Press. Song for the Disappeared Love (2010) and The Country of Planks (2015), both translated by Daniel Borzutzky, are released by Action Books. Zurita’s other poetry collections include: El Paraí­so Esta Vací­o, Canto a Su Amor, Desaparecido, El Amor de Chile, Los Paí­ses muertos, In Memoriam, and Las Ciudades de Agua. He has just completed a book that includes “Inscriptions Facing the Sea,” a project to inscribe 22 phrases in the cliffs of the north coast of Chile that would only be read from the sea.

Raul Zurita was born in Santiago, Chile, in 1950. He started out studying engineering before turning to poetry. His early work is a ferocious response to Augusto Pinochet’s 1973 military coup. Like many other Chileans, Zurita was arrested and tortured. When he was released, he helped to form the radical artistic group CADA; and he became renowned for his provocative and intensely physical public performances. He has written what are perhaps the most massively scaled poems ever created. He has done this with earth-moving equipment and with smoke-trailing aircraft. In the early 1980s, Zurita famously sky-wrote passages from his poem, “The New Life,” over New York and later—still during the reign of Pinochet—he bulldozed the phrase “Ni Pena Ni Miedo”(“Without Pain Or Fear”) into the Atacama Desert which, for its length, can only be seen from the sky.

An article in Jacket Magazine elucidates, “He says that in those days of brutality and distrust and terror…he began to imagine writing poems in the sky, on the faces of cliffs, in the desert…. He started to imagine that he might fight sadistic force with poems as insubstantial as contrails in the air over a city.” Zurita’s renowned poetic trilogy, composed over a span of 15 years, is considered one of the singular poetic achievements in Latin American poetry: Purgatory appeared in 1979, Anteparadise in 1982, and The New Life in 1993.

Zurita is the recipient of numerous awards, including a Guggenheim Fellowship, the Casa de las Americas Prize from Cuba, and the National Poetry Prize of Chile. His work has been translated into a dozen languages.

Raúl Zurita, winner of the Chilean National Poetry Prize, is the author of the renowned poetic trilogy Purgatory, Anteparadise, and The New Life, considered one of the singular poetic achievements in Latin American poetry. His other publications include the book INRI (translated by William Rowe), Song for His Disappeared Love (translated by Daniel Borzutzky), and the poetry collections El Paraí­so Esta Vací­o, Canto a Su Amor, Desaparecido, El Amor de Chile, Los Paí­ses muertos, In Memoriam, and Las Ciudades de Agua. He has just completed a book that includes “Inscriptions Facing the Sea,” a project to inscribe 22 phrases in the cliffs of the north coast of Chile that would only be read from the sea. Zurita is the recipient of numerous awards, including a Guggenheim Fellowship, the Casa de las Americas Prize from Cuba, and the National Poetry Prize of Chile. His work has been translated into a dozen languages.

“The poem itself is a surreal translation into both possible and also impossible imagery of unspeakable and nearly unsayable experiences of imprisonment, torture, and murder, of powerlessness and sorrow and spiritual destruction, yet also of enduring and holding onto one’s humanity, during the brazen dictatorship of Augusto Pinochet.” —Reginald Gibbons

INRI responds to the need to find a language for an event that was kept hidden and excluded from official records in Chile: the fact that the bodies of the disappeared were thrown out of helicopters into the mouths of volcanoes and into the sea. In order to bring this event, that was neither seen nor heard, into language, Zurita invents a form and language capable of bringing it into the present. The one place where these unspeakable acts might be registered is in the landscape of Chile: the mountains, desert, and sea. There the event might begin to be touched, heard, and finally seen. When there are no places from which to speak, “the stones cry out.” INRI is written as poetry without regular lines or metre. In the tradition of Whitman or Ginsberg’s Howl, it works with long breaths and large blocks of meaning: intensities that overrun the usual measures of speech and syntax. To read it is to experience a strange force pulsing through the language, breaking apart its usual channels, and opening unseen and unheard zones.

Song for His Disappeard Love

“I sang the song of the old concrete sheds. It was filled with hundreds of niches, one over the other. There is a country in each one; they’re like boys, they’re dead.” In this landmark poem, written at the height of the Pinochet dictatorship, major Chilean Poet Raul Zurita protests with ferocious invention the extinguishment of a generation and the brutalization of a nation. Of the role of poetry and of his own treatment by the military under this regime, Zurita has said, “You see, the only thing that told me that I wasn’t crazy, that I wasn’t living in a nightmare, was this file of poems, and then when they threw them into the sea, then I understood exactly what was happening.” This elegy refuses to be an elegy, refuses to let the Disappeared disappear. 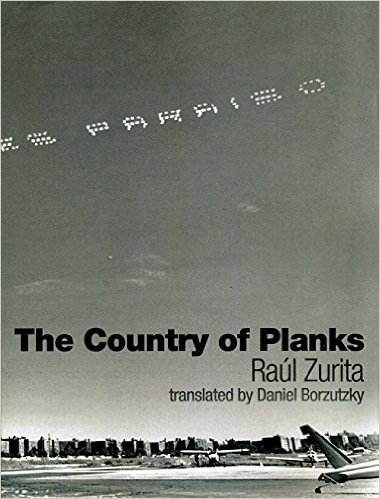 The Country of Planks

“In Zurita’s writing, these are the realities of a contaminated, homicidal nation. The shame of the political has been absorbed by the natural. The blood and the bodies of the disappeared, now scattered throughout the landscape, have become part of the homeland, the Chilean soil. It’s a rhetoric of shame, of loss, of unquantifiable and unspeakable violence.”—Daniel Borzutzky 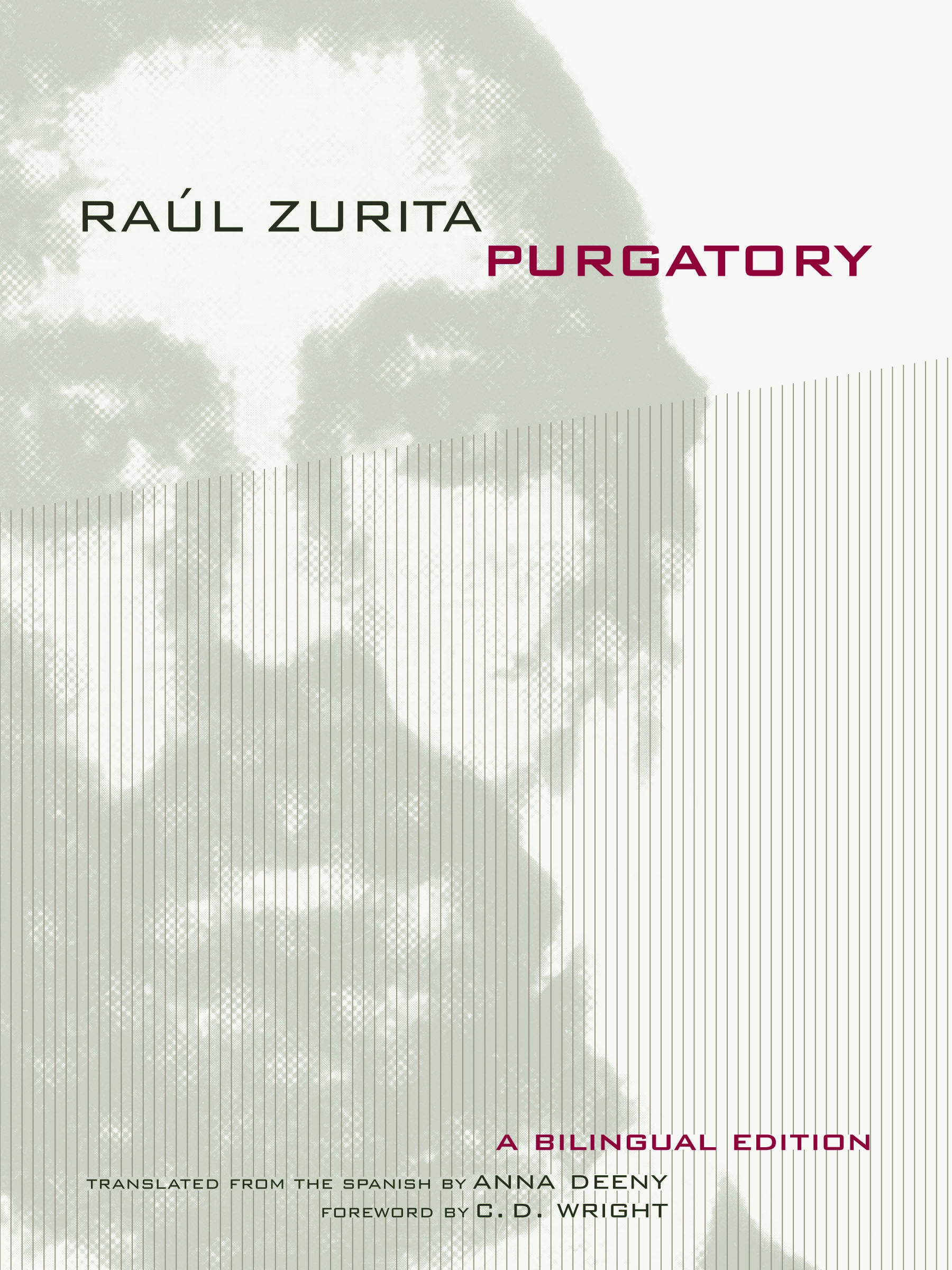 Raúl Zurita’s Purgatory, a landmark in contemporary Latin American poetry, records the physical, cultural, and spiritual violence perpetrated against the Chilean people under Pinochet’s military dictatorship (1973-1990) in the fiercely inventive voice of a postmodern master. This beautiful en face edition, superbly translated by Anna Deeny, brings to English-language readers an indispensable volume written by one of the most important living poets writing in Spanish today. Zurita was a 24-year-old student in Valparaí­so when, on the morning of the coup, he was arrested, detained, and tortured. Conceived as the first text of a Dantean trilogy that includes Anteparaí­so (Anteparadise) and La Vida Nueva (The New Life), Purgatory is his anguished response to Chile’s violent recent history. The Bloomsbury Review says of Purgatory, “It remains one of the most important and dynamic works of contemporary Latin American poetry….This sequence of startling and painful poems combines visual and concrete poetry with short, lyrical texts that release the forces of suffering until they become the poetic body of triumph. Every young poet who wishes to find out what a poem does needs to read and study this book. The lessons found here will redefine poetic commitment.”

• An Overview of Raúl Zurita’s Work — The Millions

• A Reading by Raúl Zurita with Translator Anna Deeny — WBEZ91.5

It’s sweet and it’s not.
It was the last crack and there was no need to move.
Now everything moves. Your pupils are still,
but four infinitely open eyes see more than two.
That’s why we saw each other. That’s why we speak to each other,
while with your spine you support mine. And even if no one sees
it, I thought this would be good, that it’s fine. That it would be.

Now everyone is fallen except for us the fallen.
Now the entire universe is you and I minus you and I.
After the blows ended, we moved a bit and destroyed I was the
only one you felt come closer.
Now no one will know, but it’s you I look for, who I care for.
Weeping for you perhaps we are all one thing.
Now I know it but it doesn’t matter.

—from Songs for His Disappeared Love

I heard an unending field of white daisies. They bend in the wind. I hear the moaning of the thin stalks as they bend. It’s grating, high-pitched sound. When the wind stops the silence comes back.

You can hear whole days sinking, strange sunny mornings, unfinished love, goodbyes cut short that sink into the sea. You can hear surprising baits that rain with sunny days stuck to them, loves cut short, goodbyes that not any more. Baits are told of, that rain for fish in the sea.

The blue brilliant sea. You can hear shoals of fish devouring baits stuck with words that not, days and news that not, loves that not any more.

You can hear the sky. It is told that amazing
baits rain down with piece of sky stuck to them
upon the sea.

—from INRI, Translated by William Rowe 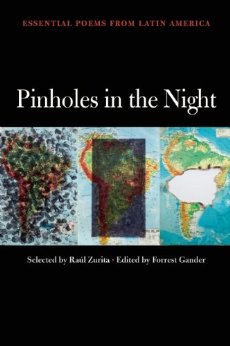 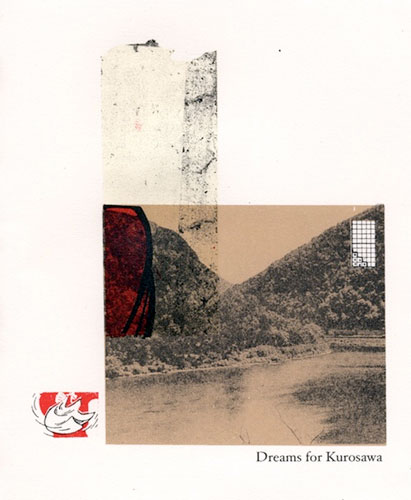 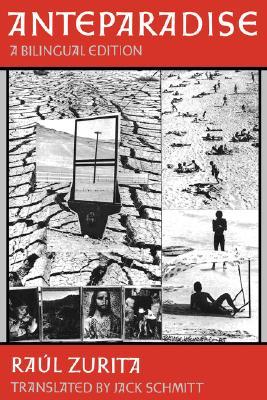 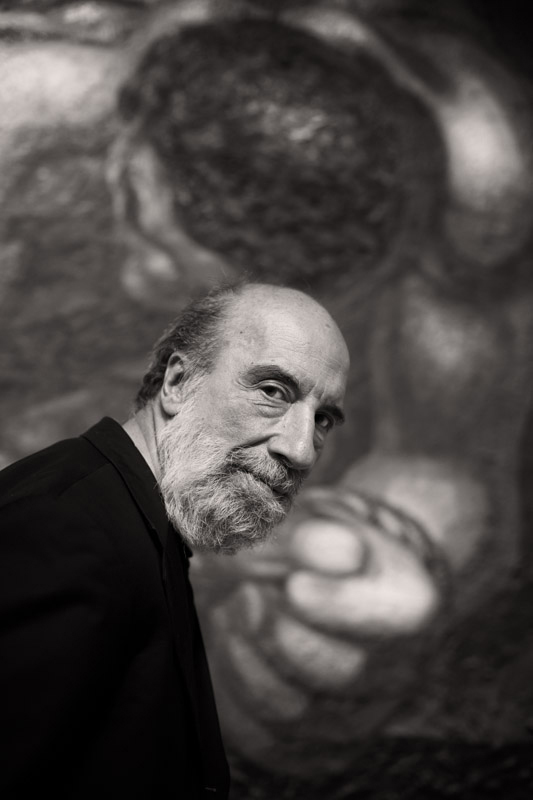 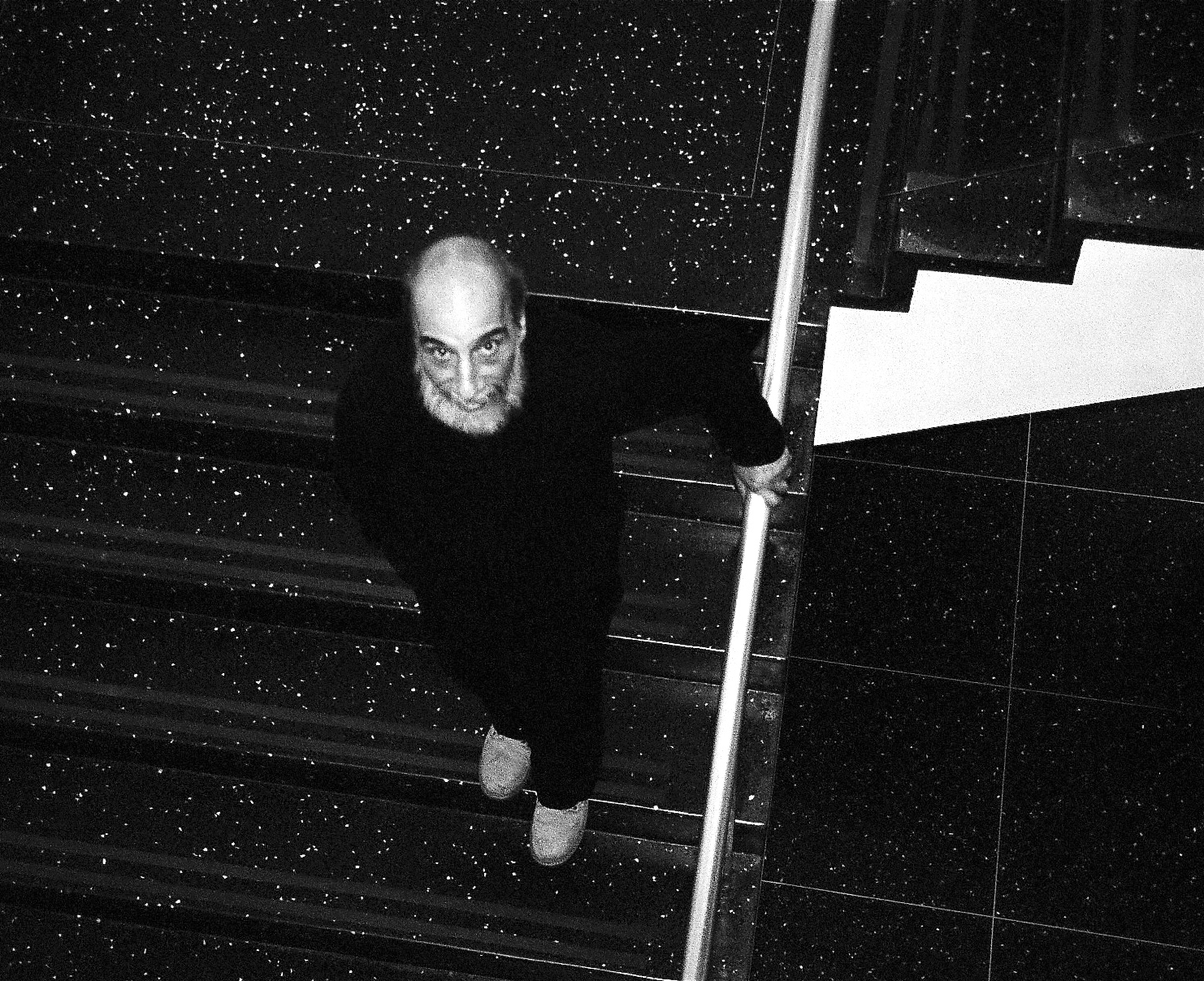 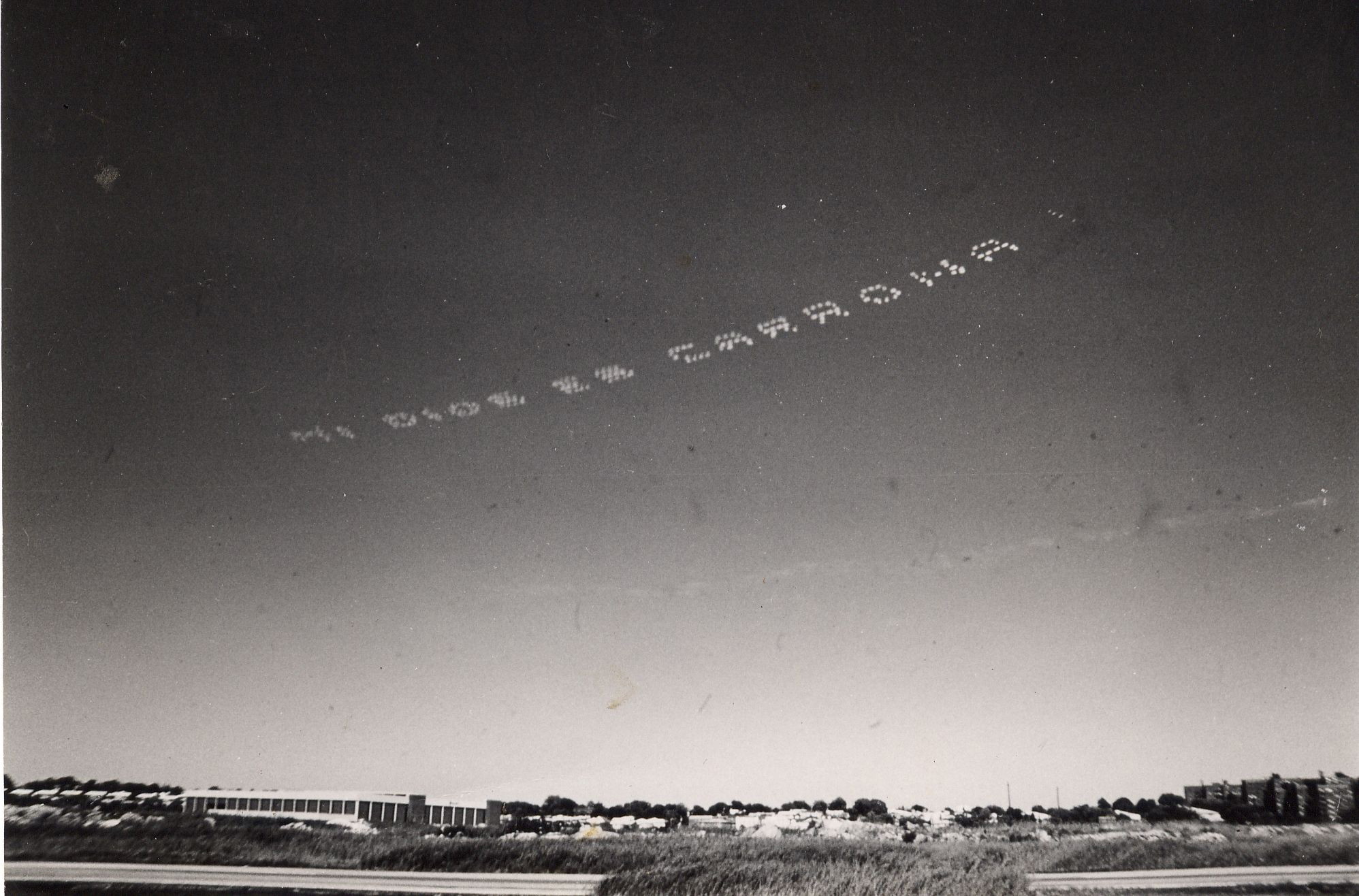 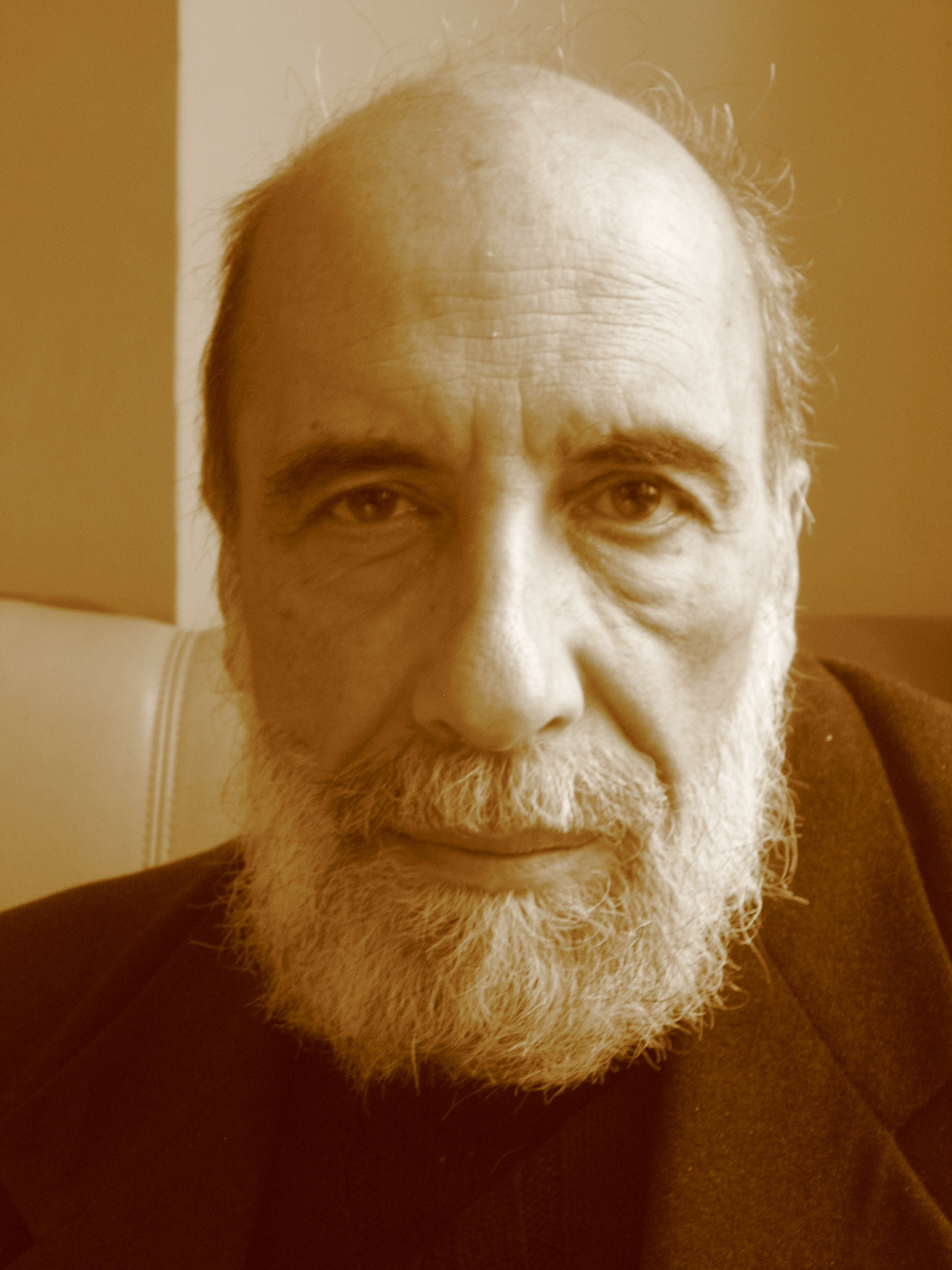